Every startup hits a plateau at some point. At CloudSponge, we hit ours after four years, when we noticed our growth and churn began to hover dangerously close to one another. Instead of dumping a bunch of money into advertising, we spent some time just talking to customers and learning the real cause of our churn. The answer was a lot simpler than we thought.

In this guest post, Intercom customer Jay Gibb, founder of CloudSponge, a B2B, SaaS solution for importing address books from webmail accounts, explains how he used highly-targeted emails to nurture relationships with new and existing customers. This led to higher quality responses than everything he’d tried in the past.

Why we needed help

From our beginnings in 2009, our growth had been up and to the right. We were adding more customers than we were losing each month and revenue ratcheted up consistently. By the end of 2013 however, we hit the inevitable startup plateau where our churn was nearly matching our growth so our MRR was starting to flatten (see chart above).

As soon as we spotted the new trend line, we put our heads together for a week to brainstorm ways to increase our conversion rate and decrease churn. We mapped out our entire customer lifecycle to learn where people were falling out of the funnel and we discovered that we were failing miserably at meaningful customer engagement.

We had all the usual transactional messages – welcome emails, receipts, password reset instructions etc – but we weren’t really engaging with our customers on a personal level until they were talking to support.

The first thing we did (as usual) was to start scoping out a project for how we’d handle new business rules to trigger new targeted messages. As usual, it wasn’t as trivial as we hoped it would be (especially when we considered that these rules and messages would be changing often).

I was frustrated and depressed by the size of the project. There’s no way we could prioritize it above everything else.

Making sure our existing customers are ecstatic about our product always trumps everything so we needed “Plan B”. Custom building every message and every trigger was just too rigid and not related closely enough to our core value proposition to ever become our top priority.

We needed a flexible, technically-light way to deliver highly targeted, personalized messages to our users, triggered by what they were (or weren’t) doing with our product. Sheesh, that’s a tall order.

Given our competing priorities we decided to start with the basic Intercom installation, which took a few minutes and was deployed the same day. The auto-message feature was empowering, but I had to use it sparingly since my segmentation options were limited and I wanted to send well-targeted messages.

So we queued up a developer task to use Intercom’s Ruby Library to increase our segmentation granularity with their custom user (and company) attributes. It only took a couple days to get the user profiles in sync with our internal data. (Nowadays people can use Intercom’s “Events” to accomplish what we did with custom user attributes, but they didn’t have that at the time.)

Once our user data was inside Intercom the power it gave me blew me away.

Now we’re updating 27 different custom user attributes for every person who signs up, such as their referring URL, the landing page they arrived on, the timestamp of when they told us the domain name of their website, the timestamp for when they imported their first address book, the number of logins they’ve created for their teammates, and so on.

These custom user attributes combined with Intercom’s auto-messaging feature gives me everything I need to send perfectly targeted messages at exactly the right time without even talking to a developer, let alone interrupting them. Here are a couple of examples of how we use messages to solve funnel challenges:

Problem #1: potential customers were stuck before they started

CloudSponge users cannot get any value out of the product without telling us the domain name of their website, even if it’s just localhost or 127.0.0.1. However, a lot of people stop at this step. So we set up the following auto-message trigger:

A message gets sent if the customer hasn’t inputted their website’s domain name within 2 days of signing up.

Here’s what it says: 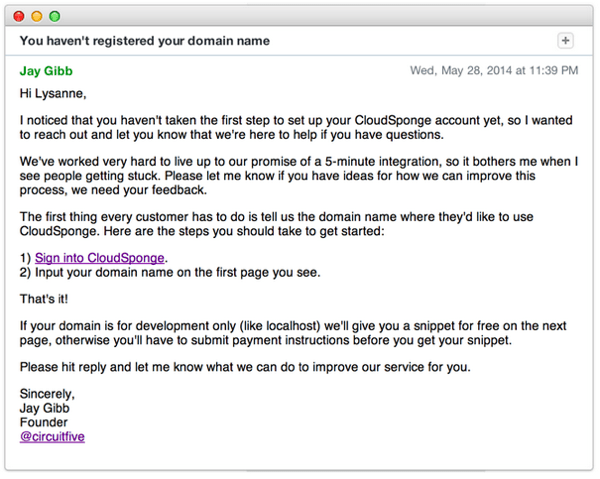 So far we’ve seen an average 12% increase in people getting through this stage of our funnel thanks to this well-timed message. Small effort, huge payout. I’m excited to see how much better it can get.

We consider an account “active” when they do their first address book import. This tells us they understand the product and have integrated it successfully (usually in their development environment first.) If they don’t get this far, it means we lost them somewhere and we need to provide a bit of extra guidance. In Intercom we scheduled an auto-message when a lead registered their domain at least two days ago, but still hasn’t done any address book imports.

This message tests a hypothesis that was inspired by Lincoln Murphy, a “customer success evangelist” for SaaS companies. Murphy suggested posing open ended questions to start conversations with your customers rather than ending with the usual Call to Action. Intercom helped us ask the right people the right question.

when was the last time you talked to a customer outside of a support or renewal call? Try asking an open-ended question… and just listen

In 90 days, we’ve had 43 replies to this email and over 60% of the people who replied became paying customers. Again, this is a work in progress, but we’re excited about the possibilities.

And about that churn…

Churn is tricky. There are a million reasons why accounts get canceled or neglected and it’s really hard to get to the route cause of why it happens. Our past attempts with exit surveys and desperate sounding emails were massive failures.

So we tried using Intercom to connect with lost customers. We started sending an email to everyone who clicked on the “Cancel Subscription” link inside their CloudSponge account, and within a couple of months, everything became clear. 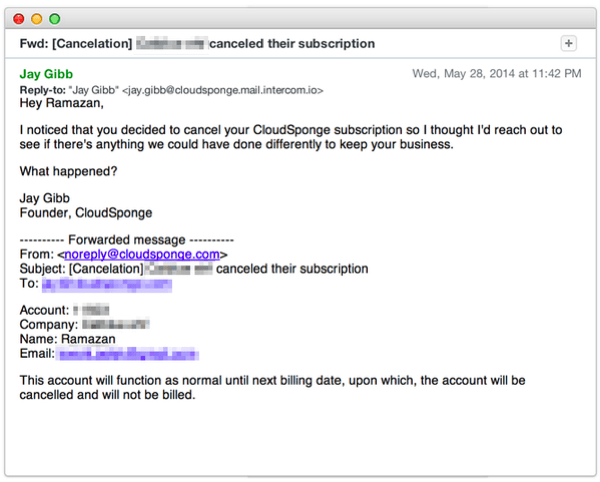 Yup, nearly 100% of people who responded said they went out of business. I’ve asked around a bit and apparently that’s normal for B2B SaaS companies that work with a lot of startups.

You know what else? Our open rate on this email is 70% and our reply rate is 27%. That’s 10x better than any exit survey we ever tried.

The key is caring about your customer’s success

Whether you’re B2B, B2C, SaaS, PaaS, etc, people want to work with companies that are operated by real people who genuinely care about the success of their customers.

Pushing our account data into Intercom custom user attributes has allowed us to establish this critical connection with new and existing customers, without distracting our most precious resources from spending their time on our core product.