We often spend less time thinking and talking about the impact of design work – that is, what does our work truly achieve and change beyond just the artefact that it delivers. We believe that thinking deeply about how designers can have maximum impact is the difference between a good designer and a world class one, and it’s something that we’ve been talking about a bunch lately in Intercom.

Recently, we shared an internal memo with our team detailing our philosophy around how to have impact as a designer. It’s something that has since helped managers and ICs get clear and stay aligned around what impact looks like and how to achieve it, and it applies broadly to product designers, content designers, information architects, visual designers, even researchers. It consists of answers to just four simple questions, and we’ve found it so valuable that we’re delighted to share it below.

Question 1: What does having impact as a designer mean?

Before we talk about impact, let’s zoom out and talk about performance more broadly.

Performance is measured on two axes: behavior and results. 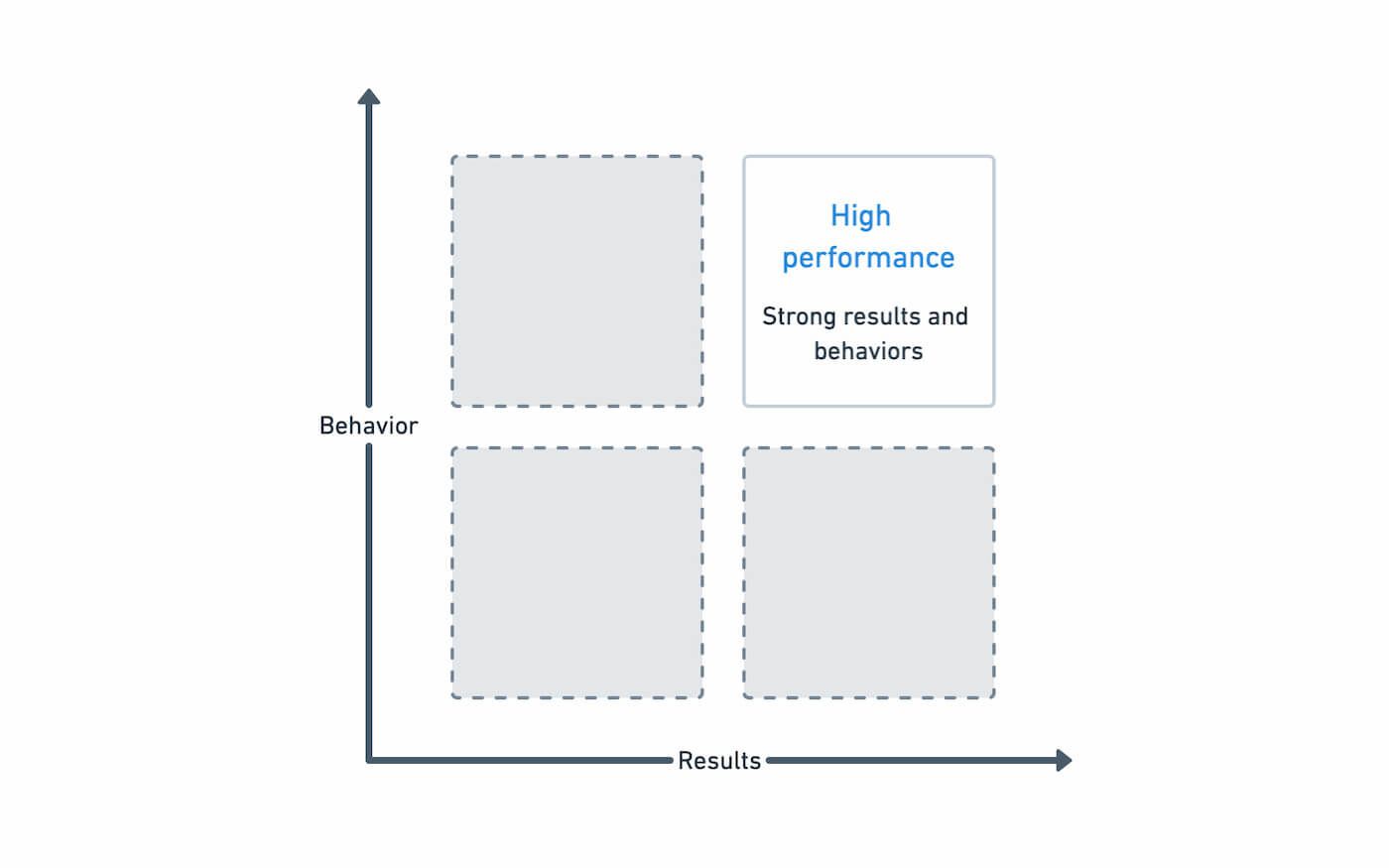 Behaviors are assessed based on your ability to successfully work with others and on your demonstration of leadership in your role.

Successfully working with others means:

Leadership can be demonstrated through:

All of this is to say that doing high impact design work is central to being a high-performing designer.

Question 2: How can a designer have impact?

There are three types of work that a designer commonly does:

Regardless of the type of work, all work results in:

As a designer, it’s important to be able to draw a connection between the work that you do (the “what?”) and the impact of that work (the “so what?”), to ensure that you have made a meaningful and positive change.

All of this can be translated into a simple framework (based on the Kellogg model):

Now that we’ve established this framework, we can apply it to a few examples to illustrate just a few of the many ways in which designers can have impact.

Example 1: The designer worked on a high-quality solution to a known customer problem, drove project progress, shipped it in high quality.

Example 2: The designer wrote a blog post on design culture at Intercom.

Example 3: The designer autonomously conducted a design review of the App Store, identified a number of quick wins, worked with the team to ship improvements during wiggle week.

Question 3: How can a designer understand the level of impact of their work? 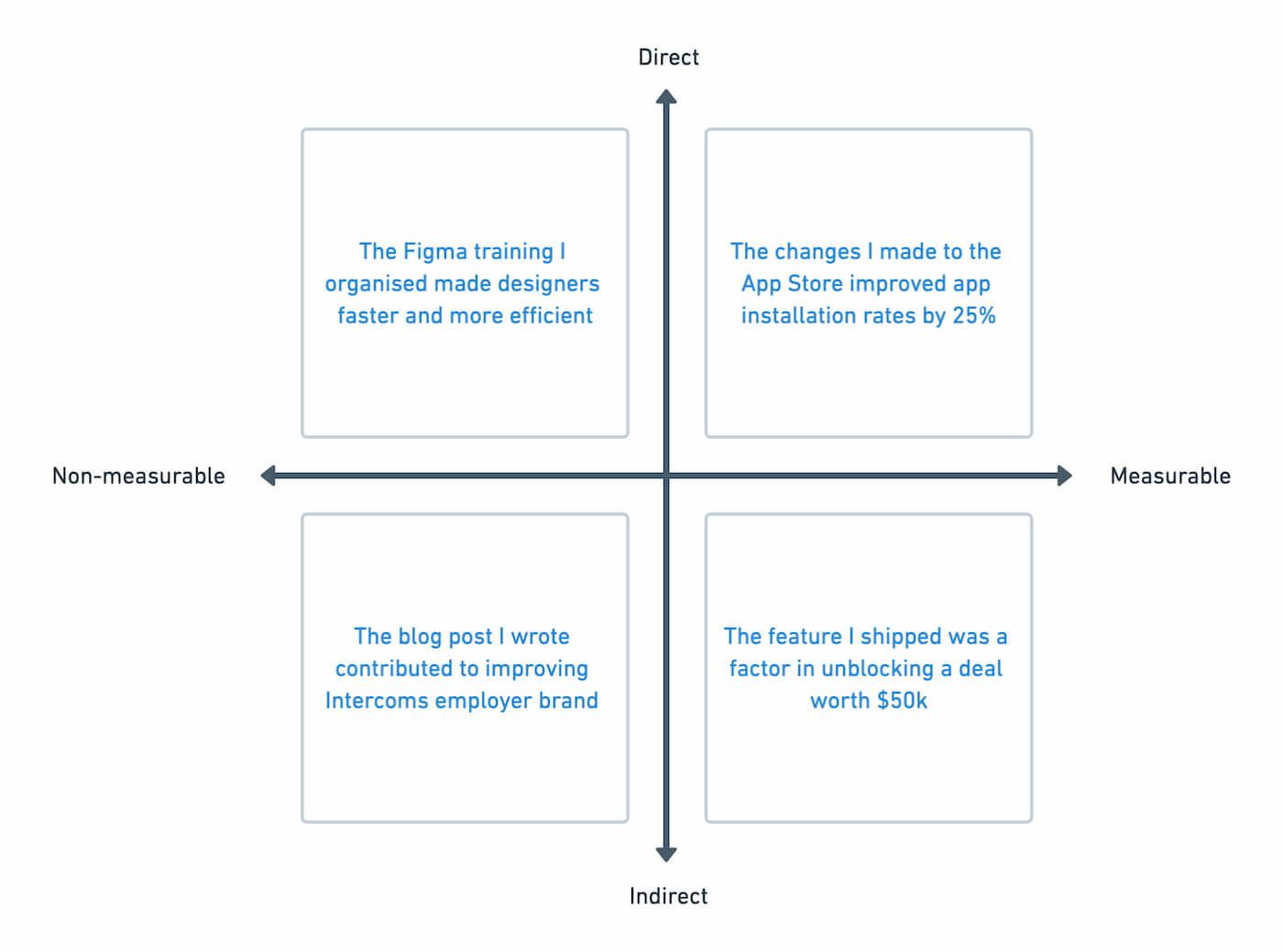 A general principle is: the farther the reach, the greater the impact.

This means that work which materially affects the wider business is usually of a greater level of impact than work which affects just the individual.

One important thing to note is that impact should increase with seniority, so the expectations for an associate designer to have broad reach are not the same as for a principal designer for example.

Regardless, all designers should search for opportunities to amplify their impact by broadening the reach of their work.

This can be done by starting small with a piece of work, then gradually increasing its impact over time by broadening its reach. Here’s an example:

As we can start to see, assessing impact is nuanced and the number of factors involved means that there is no one single answer to the question of “How can a designer understand the level of impact of their work?”.

The most important thing you can do to understand your level of impact is to regularly talk to your manager and ensure you are both aligned.

A good exercise is to ask yourself the below questions, then ask your manager the same ones. Are your answers the same? What needs to change for you to be fully aligned?

Question 4: Does working on a particular team affect the level of impact that a designer can have?

This is important because some teams take on more high profile projects than others, but any designer on any team has the same opportunity to be as individually impactful as any other.

Here’s an example scenario to help explain this:

While it is important not to conflate individual impact and team impact, there is some correlation between the two because a designer who is highly individually impactful will commonly raise the level of impact of their team.

This is what’s known as being a force multiplier and is a strong signal of a high-performing designer.

So that’s Intercom’s philosophy on having impact as a designer – four simple questions, with (hopefully) four simple answers. We hope this is of use to you when thinking about how to generate the most amount of impact possible in your own role.

Are you a product designer interested in having this sort of impact? Join our team – we’re hiring in Dublin.

Typeform’s Senior Director of Customer Success Christine Werner outlines the importance of understanding your customers’ needs and desired outcomes, and how to create blueprints to help them succeed.

Skip the boring how-tos and FAQs. Instead, create best practice content to teach customers how to get the most from your product.