All Collections
Sending messages and building Smart Campaigns
How campaigns work, and how to create one
When do users enter and exit Smart Campaigns?

When do users enter and exit Smart Campaigns?

With Smart Campaigns, you can add entry and exit rules to define which users should enter your campaign, and when they should leave. For example, if you’re creating an onboarding campaign your entry rules might be ‘Plan is free’ and ‘Signed up less than 30 days ago.’

Users can exit campaigns for different reasons. Read more about when they exit here.

Once you set your campaign live, any users who match the rules you’ve set will be entered into the campaign. Here’s how it works.

Important: Users will also need to match rules on individual messages you’ve created in the campaign to receive those messages.

How often do users enter the campaign?

We enter users who match the rules you’ve set:

*Important: If your campaign contains only In-app messages (i.e no emails) users will only enter when they log in to your app. They will not be added by the check every two hours.

Will new users enter the campaign as I'm editing it?

While you are still editing your campaign, users will not be added or removed. Instead, you will see a preview of the users that will enter:

They aren't entered into the campaign yet, to ensure they are accurately tracked when enter or exit a campaign.

As soon as you set the campaign live for the first time, you will see the audience drop to 0, then any matching users will start entering the campaign, until everyone shown in the preview has entered.

Note: If your campaign is already live, editing and saving it will not enter new users immediately. New users will still only enter the campaign every two hours, or when their user information is updated.

Does Intercom re-check entrance criteria before sending a campaign message?

No, we’ll only check entrance criteria when a user enters the campaign. After a user has entered, we won’t check them against the entry criteria again.

Important: If you add a company data variable to the body of your message (for example, company name) we’ll check the entry criteria for the campaign before we send any messages.

When do users exit a Smart Campaign?

Users will exit a campaign if they:

How do I remove users who I don’t want to receive campaign messages?

Users can be removed from a campaign using exit criteria. The easiest way to remove users is to tag them with a specific tag, like “Onboarding Campaign Opt-Out”. You can then set that tag as an exit rule for your campaign.

How often does Intercom exit users from the campaign?

We exit users who match the rules you’ve set:

Can a user unsubscribe from a particular campaign?

If a user unsubscribes from a campaign email, they’re unsubscribing from all email messages, not just messages belonging to that campaign.

How do I know if a user is in a campaign?

When you define your audience, you’ll see which users are in your campaign in the ‘In campaign now’ section.

You can also check a user’s profile to see if they’re a member of any campaign. Any campaigns they’re in will display on the left hand side of their profile. 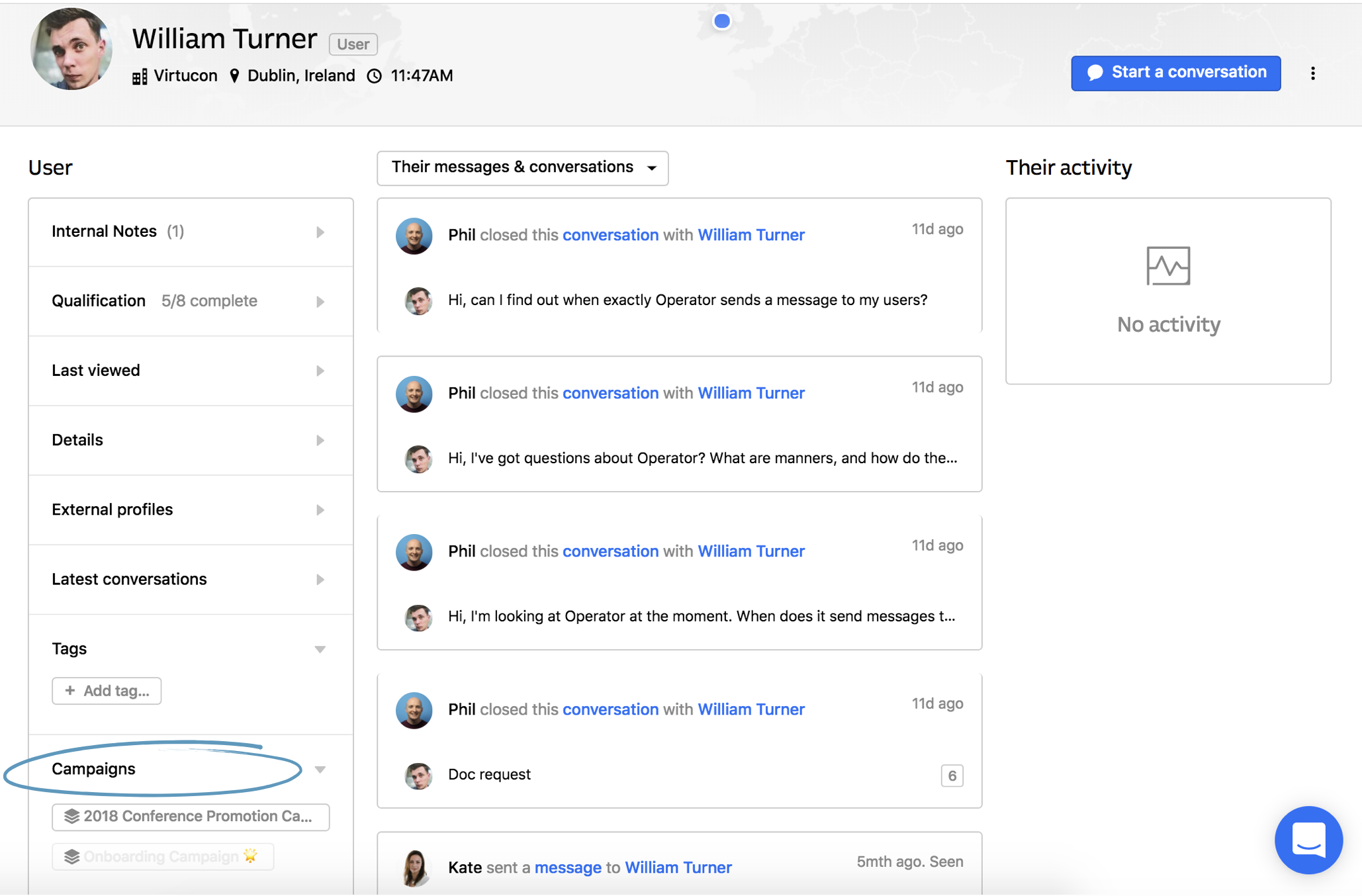 Important: We don’t remove people from the campaign if they stop matching the entry criteria.