Smart Campaigns make it easy to send customers the perfect series of targeted messages to drive them toward a common goal.

Smart Campaigns let you send a series of email, push chat, and post messages to people, based on their individual behaviors. Each message in the campaign drives people toward a common goal, and you can target your messages to users based on how they interact with your campaign.

First, go to ‘Campaigns’ on the Outbound tab and click “New campaign” in the top right:

Then, give your campaign a name:

Next, set a campaign goal. Every campaign should have a clear purpose, but message click rates will only tell you so much. Goals are the true measure of how a campaign is performing.

To add a goal, choose the attribute or event for the result you want to measure from the dropdown under “Set your campaign goal”: 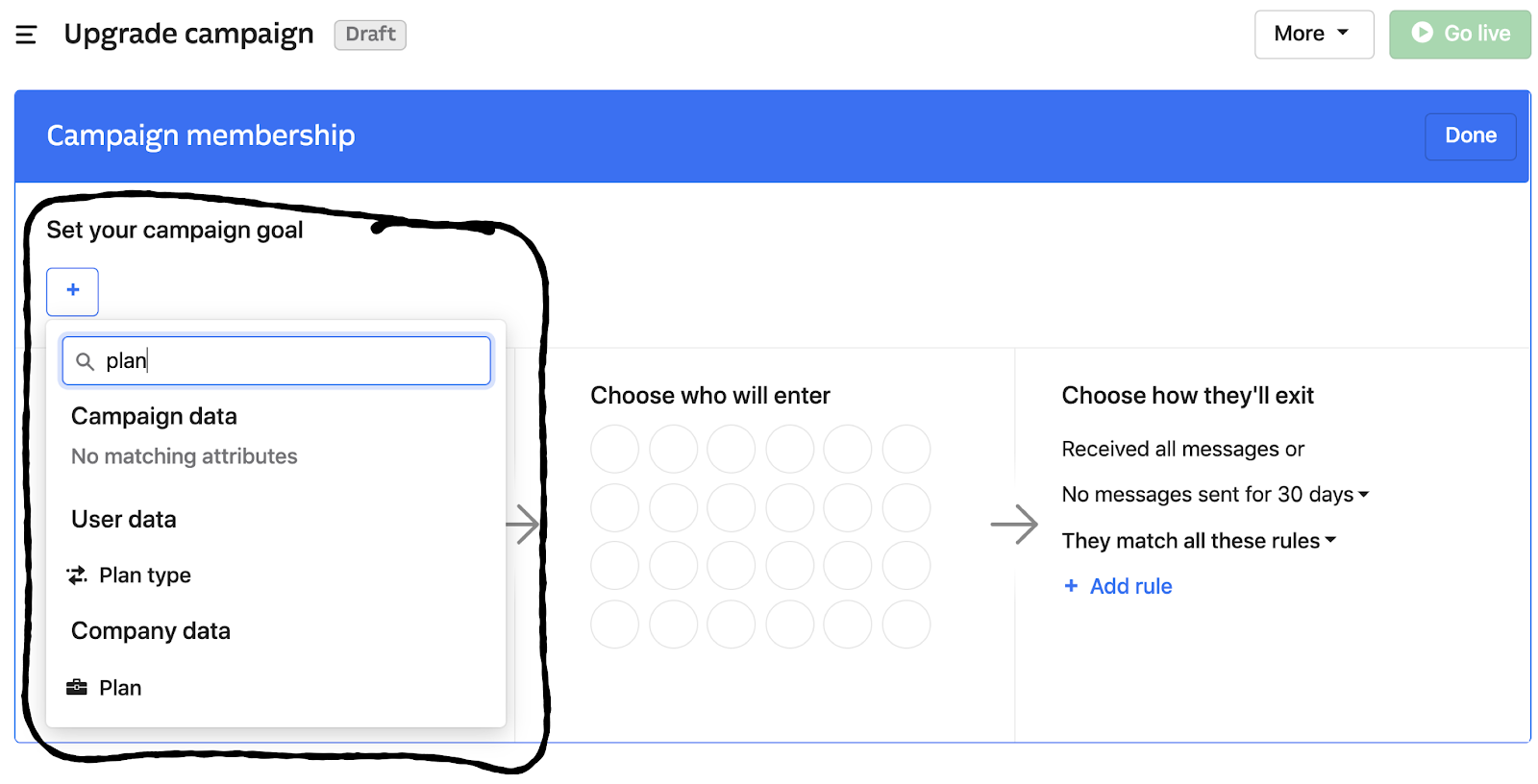 Example: if you set your goal to “Plan is pro”, each user who receives a message from this campaign and then upgrades to your Pro plan, will contribute to this goal's total.

Add rules to select the exact group of people you’d like to enter your campaign. For example, if you’d like to encourage your active users to upgrade to Pro after a certain time on your free plan, your rules might be: Users with “Plan is Free” and “Signed up more than 30 days ago” and “Last seen less than 7 days ago”.

Note: It’s ‘Last seen less than 7 days ago’ as recently active customers are far more likely to engage with your messages. We recommend only targeting users who were recently active in your app, unless you’re sending emails to re-engage them.

Choose how your customers exit the campaign

By default, someone will exit a campaign if they:

You can also add your own custom exit rules. If a person in the campaign matches these rules, they’ll exit immediately, and cannot enter the campaign again. To add exit rules just click “+ Add rule”:

Pro tip: To manually remove people from a campaign, tag them with an “Opt-out” tag, and add an exit rule for anyone with this tag.

There are two ways to add messages to a campaign. To create new messages click “+ New message”:

To move an existing message into a campaign, open it from the messages list under Outbound, and select “Move” under the “More” menu:

Define the audience for each message

Alongside your campaign entry filters, you can also define specific rules for who should receive each message within a campaign. For example, to tailor your message content for different locations, you could use a country filter like this:

To target your users based on how they interact with your campaign, these additional filters are available on any campaign message:

Pro tip: Use these filters to follow up with customers who may not have opened a message.

Choose your message spacing, and priority

To keep your messages engaging and helpful, it’s important not to send too many at once, so campaigns come with built in message spacing. Set your desired spacing for the campaign above the list of messages:

To reorder the priority of messages in your campaign, simply drag and drop with the icon on the left:

And that’s it. You can now set your campaign live, and your customers will enter it, and begin receiving messages when they match the filters you’ve set. Just click “Go live”: