Use flexible events and conditions to automate assignments & set conversation attributes, tags, priority, and SLAs — all in one place.

Inbox rules are now more powerful than ever. We’ve combined Assignment, Tag, Priority and SLA rules so you can trigger multiple actions in a single rule, see all your rules in one place, and have access to a range of more complex and nuanced triggering options.

All Inbox rules are now in the same place

This makes it easier to manage your Inbox automation, without switching tabs and losing context.

Formerly, the different types of Inbox rules were in separate tabs:

Now, they can all be created and managed from one place, under Automation > Rules:

Multiple actions from a single trigger

With all rules available in one place, it’s now possible to trigger multiple actions from a single event. 🎉

For example, if you’d like to tag, assign, and mark as priority all conversations that contain the keyword ‘cancel’ just define a single trigger, with all three actions:

Rules can now be triggered at specific moments during a conversation:

With And/Or filters, rules become flexible enough to fit any situation:

We’ve also added new conditions based on the current state of the conversation:

Learn more about how to trigger and filter your rules here.

Conversation attributes can also be updated automatically by Inbox rules. For example, if a new message contains keywords like ‘Error’, ‘Bug’ or ‘Glitch’ rules can set the conversation type to ‘Bug’:

It's now possible to automatically close a conversation with an Inbox rule. Just select 'Close conversation' from the list of actions: 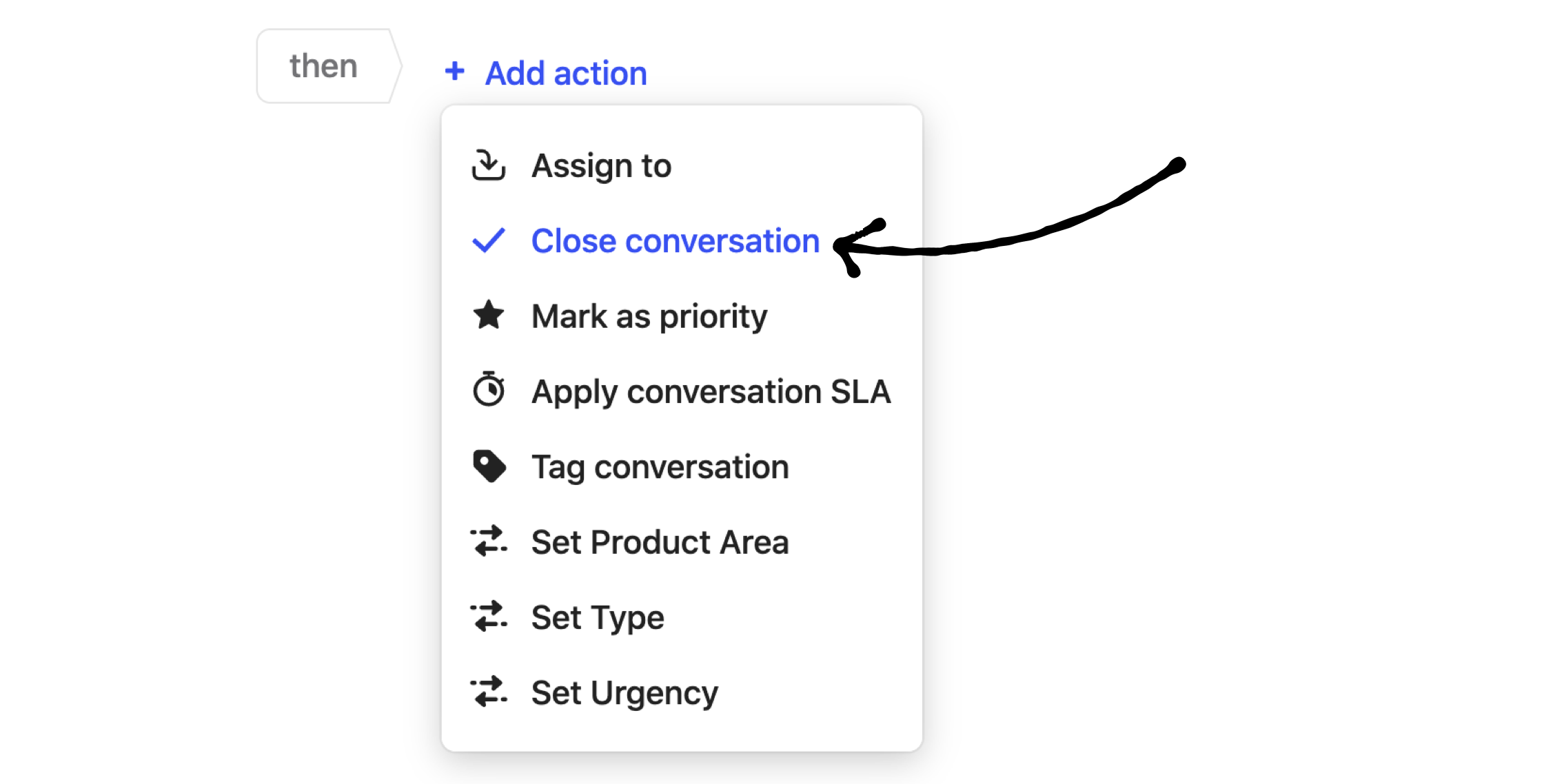 How do I enable new rules?

Go to Inbox > Automation > Rules and click “I’m ready, switch it on!”:

Or, click the banner from any of the other rules pages:

What happens to my existing rules?

When you enable the new rules:

☝️One: After moving your existing rules to the new system, Assignment, SLA and Priority rules based on message content (E.g. ‘message contains’), will be set to trigger only when a customer starts a new conversation, after the first message they send.

If you’d like a rule to fire after every customer reply in a conversation, change the trigger to “A customer sends any reply” event, and add a filter for: “Teammate assigned has any value”. This will let the rule be applied at later points in the conversation.

If you’d like rules triggered by the API to run for all conversations (regardless of how they were started) set up two rules with the same filters, one for each event.

After switching to the new rules system, we recommend taking a couple of steps to optimise how you manage your rules and take advantage of the new system.