All Collections
Engaging your customers with Series
When do customers enter and leave a series?

When do customers enter and leave a series?

Learn about using multiple entry rule blocks, and the different ways customers can leave a series.

When do customers enter a series?

Customers will enter a series when they match the filters in any of the entry rule blocks. Any rule block at the start of a path is automatically set as entry rules:

You can have multiple rule blocks, which will allow customers to enter more than one path at a time.

Important: Customers will not enter a series if they match its exit rules.

How often do customers enter series?

Whenever a customer logs in to your app, or visits your website, and is tracked by Intercom, they’ll enter any series where they match the entry rules for a path.

If they haven’t logged in, entry rules are checked once an hour for anyone who should enter. Rule blocks in the middle of a path (when the customer has already entered the series) are checked approximately every 15 minutes.

When do customers leave a series?

There are multiple ways for a customer to leave a series, they can exit according to your exit rules, become disengaged, or finish a path.

In your series settings, you can define a set of rules that if matched, will cause a customer to exit the series. Exit rules can be based on any attributes or events you track about your customers or their companies:

Note: For more nuanced targeting in your exit rules, you can combine ‘And’ with ‘Or’ rules.

If a customer’s data is updated to match the rule they will exit the series completely, and cannot re-enter any paths within.

Tip: For a simple way to remove specific customers from a series, just add an exit rule for all customers with a certain tag, then you can apply it as needed to anyone who should exit the series:

Note: If a customer matches the series' exit rules this will also prevent them from entering the series.

Disengaged with a series

If a customer reaches a rule block they do not match, or a message they don’t come online to receive, they’ll wait for the period specified in the block:

After this period, if they still haven’t received the message or matched the rules, they’ll be marked as disengaged and leave this path.

Note: If there’s a fallback path in place for customers who don’t match a rule block, or receive a message, they’ll proceed down this path instead, and won’t be marked as disengaged: 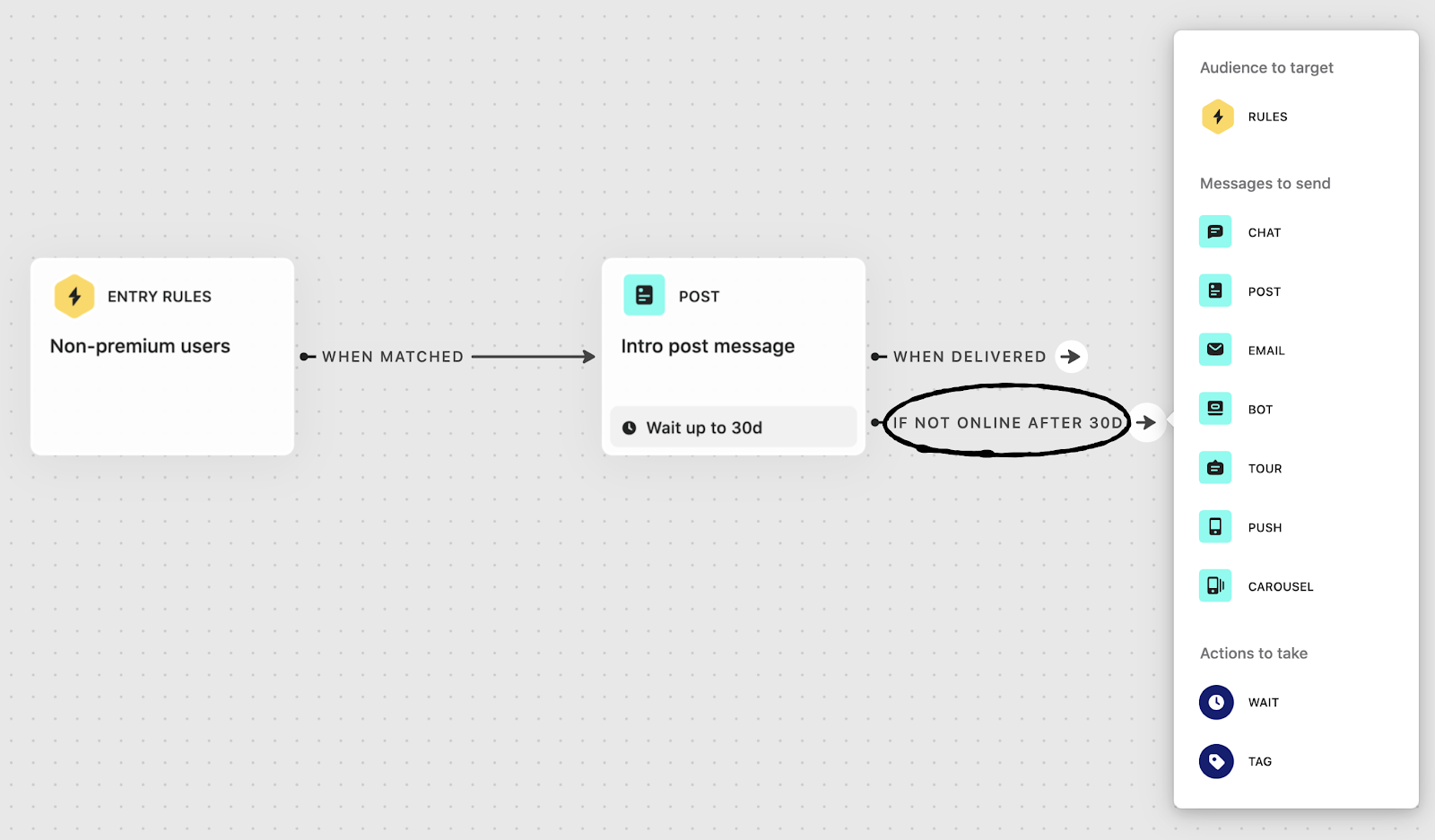 If a customer reaches the end of a path in the series and have no other content to receive (in another path for example), they’ll be marked as ‘Finished’ and leave the series:

Hitting a series goal will not automatically exit a customer from your series, if you’d like them to exit upon hitting the goal, you must add this as an exit rule too.

See the percentage of customers who have started, finished, disengaged, exited or hit the series goal:

Read this article to understand exactly how your series is performing and where your customers are leaving.