Understand how your customers get help, and the impact of Proactive and Self-serve support.

Written by Damon Alexander
Updated over a week ago

The Conversational Support Funnel is the most effective, efficient way to provide personal support, at the scale your business needs as it grows.

There are three stages in the funnel:

With the conversational support report, you can see the impact you’re having at each stage of the funnel:

This report shows you:

Use the filter at the top to see data for a specific time period: 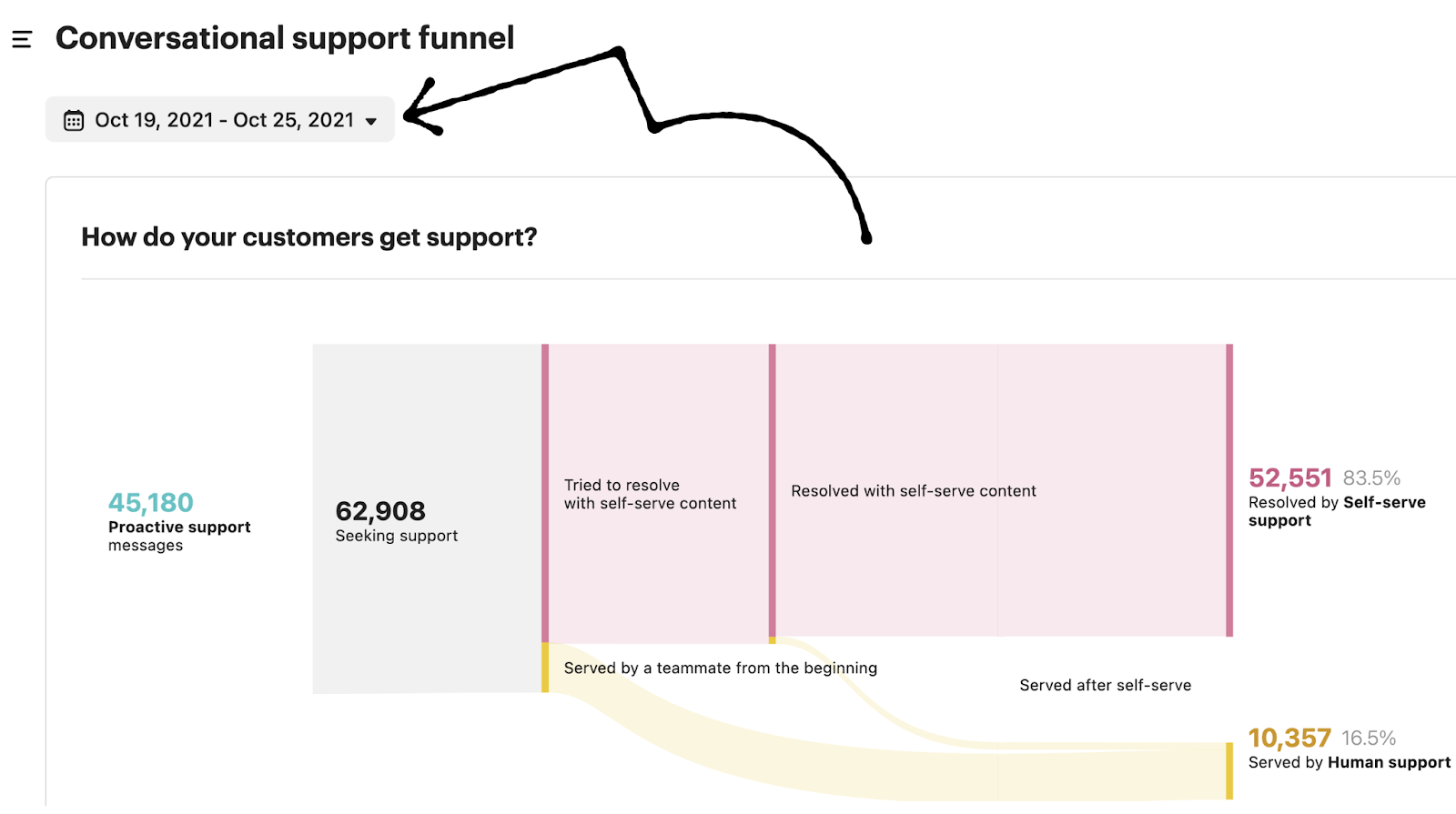 This article breaks down the different metrics in the report, and how they’re calculated.

How do your customers get support?

The first, and most important chart in this report shows you exactly where in the funnel your customers are finding support. It’s broken into three colour coded sections.

On the left you’ll see the total count of “Proactive support” messages that you sent:

Important: By default, this count includes all outbound messages. Define which messages are counted towards proactive support in the usage breakdown.

Proactive support is characterized by the messages you send your customers to support them before they need help, for example:

People “seeking support” are those who have viewed or searched for an article (in the Messenger or on your Help Center), or started a conversation in a session.

Self-serve support is the support your customers receive from articles ​​in the Messenger, the Help Center, suggested by Operator or answers provided by Resolution Bot. You’ll see this here in the pink section of the report:

Note: It does not include articles viewed in the content showcase app

This section is divided into two groups of people.

The customers not represented in pink, those who began with self-serve content but ended up needing human support, are shown in the final section, Human support. 👇

Human support is all the conversations your teammates have with your customers in the Messenger, or via email. It’s represented in this report in yellow:

This section is also divided into two groups of people:

Note: You’ll also see the total number of customers who stopped seeking support on the bottom left. These customers are not counted anywhere else in the report. — They searched for articles in the ​Help Center ​or Messenger but didn’t start a conversation or view an article:

Tip: Hover over any section of this chart to see a comparison with the previous time period:

This chart shows the split between sessions that were resolved by self-serve, and those supported by your team (human support):

This chart shows you how many proactive support messages you delivered to your customers, and how many of them were opened, clicked on or reacted to.

This is also where you can filter for which messages you consider “Proactive”. Click “Manage proactive messages”:

There are many ways to filter your messages. Here are few examples:

You can also use different filters in combination:

Important: The filters you apply here will also affect the first chart. In this report.

Pro tip: Applying a tag or updating the sender of a message retroactively will allow you to filter for it in this report, even if it was already sent previously.

This chart shows you a split of those conversations resolved entirely by self serve (in pink), and those which were served by a human after viewing articles or engaging with a bot (in yellow):

Below the bar, you’ll see three other metrics:

Served by a teammate

Finally, the report shows you the outcome and details of the conversations that received human support:

You’ll be able to compare:

These charts show the often-missed impact of self-serve content on your human support conversations. You may find that conversations with a combination of support methods (self-serve and human) have noticeably different ratings, or time to close.

You can not only compare the metrics side by side, but also with the previous time period to see if you’re improving, or need some additional support.