Everyone is talking about the rise of chatbots; but are forgetting that humans are pretty good too.

In recent months we’ve seen Facebook, Kik and Telegram launch bot platforms on top of their messengers, and everyone and anyone declare our bot filled future. But few are asking when and why people might want to talk to bots instead of other people, and if the direction Facebook and others are pointing at is ever going to come to pass.

Much of the excitement around bots focuses on one of two things:

Both of these lines of thinking are extremely one dimensional, and self serving. Bots on messaging platforms are one potential new distribution channel, but not the only one, as Google’s new streaming apps attest to.

Secondly, if you actually talk to consumers, the people supposedly buying from all these new bots, you’ll quickly find that they actually like talking to people most of the time. How many times have you conversed with a voice system only to find yourself desperately wanting to talk to a person?

Bots and humans are good at different things

To really understand the potential of bots, we need to understand what bots are, and their strengths and weaknesses relative to other ways of doing things. One of those other ways is communicating with humans. And as we’ll soon see, human communication is a formidable foe.

First, let’s take an important step back. A bot is a simple computer program, that makes things happen based on some input. A chatbot is a bot that lives inside a chat product, for example a messaging app. Because messaging platforms like Facebook Messenger have such huge reach (900 million people and counting), when people are talking about bots, they are really talking about chatbots.

So if a chatbot is being heralded as the next major innovation in technology, we need to understand how it performs versus what currently exists in chat products: humans talking to humans. So what are computers good at, and what are humans good at?

Computers are amazing at computation. They can look up data, calculate numbers, and do things like look at millions of fact-based options and return the best one in a matter seconds. Computers are not yet good at understanding human emotion. Not even close. The state of natural language processing means they can’t even understand what we are asking them, nevermind interpret how we feel by reading between the lines. I believe we are at least a decade away, if not much more, from computers being able to accurately interpret human emotion in communication.

Humans on the other hand aren’t great at computation, but are amazing at understanding human emotion. We have empathy. We know how to persuade people to first like, and then love something. We know what it’s like to be frustrated. We know what it’s like to over-deliver in order to make people feel better. We can reason. We can listen. We know when to remain silent, and when to interject. There is no way to deliver effective customer support or marketing, without empathy and emotional intelligence. For the foreseeable future, world-class customer communications will require humans.

So if bots can’t read between the lines and make us feel better, what are they actually good for? Turns out that with today’s and tomorrow’s technology, they are good for simple, low-level, repetitive questions and tasks. That’s it. If you want to know when your next phone bill is, a bot can tell you. How much it will cost? A bot can tell you. But why you might have been over-charged? Time to talk to a human.

Bots have serious limitations, but it is exciting to think that bots can help in win-win situations. Sometimes we don’t want to talk to a human – we just want a quick answer to a simple question. For example, bots can deal with all the repetitive questions sent to customer support teams, which frees up support staff to answer much higher value queries. The effect of this will be that support teams will shift from being perceived as cost centers, to being seen as increasingly strategic assets to successful companies.

When bots are not the answer

Even though bots will likely play an important role in the future of customer communication by tackling these low-level repetitive tasks, they are not good for every low-level, repetitive question or task. Often a simple form or workflow is better. Most of the problems with bots we see today isn’t just bad design. It’s that bots are the wrong solution to begin with. People are blindly applying bots to interaction design problems that already have better solutions. People are just redesigning terrible logic trees inside messaging apps. 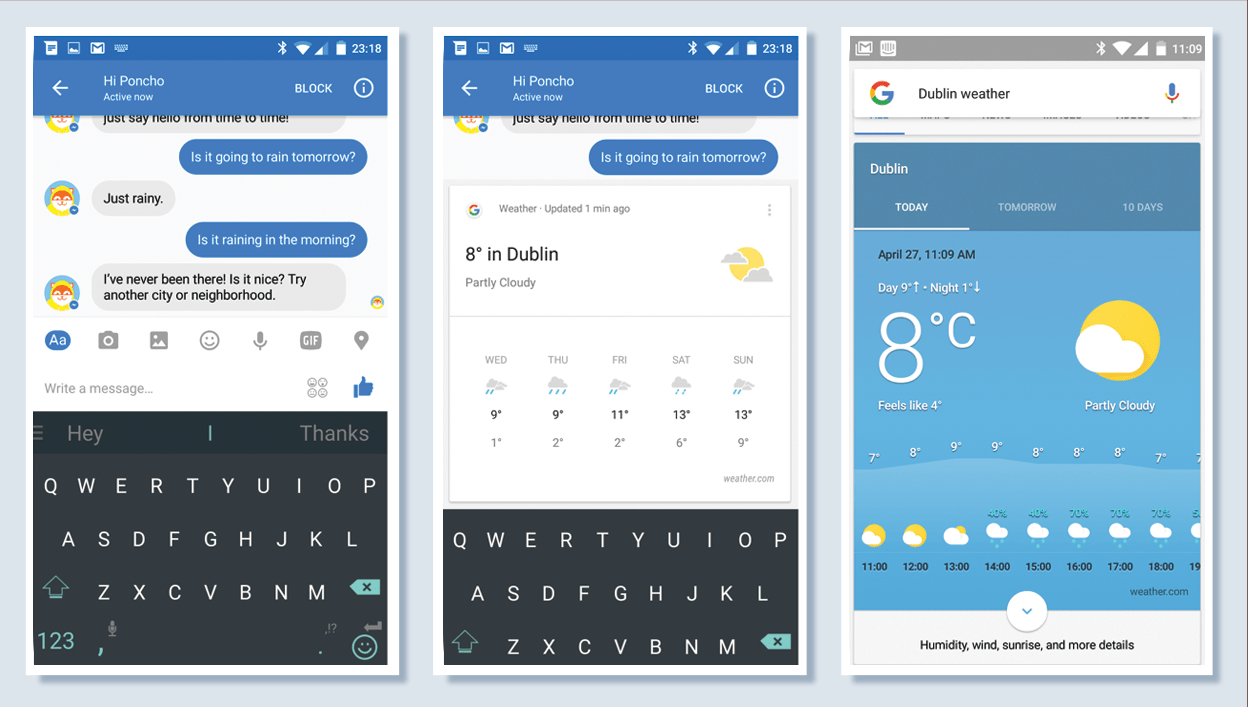 Is a bot responding to a question about the weather (left), really the best solution in the three examples above? A nicely designed card does a much better job (middle – this is a sketch I made), and especially when it’s dynamically inserted into search results (right) as it currently is if you ask Google rather than Poncho.

All this leads me to conclude with the most important question of all: do customers actually want to talk to bots? In the clearly bounded win-win scenarios I highlighted above I think they might. But the future that Facebook is pointing at is the one that I see least likely to come to fruition.

Facebook’s goal is to make it indistinguishable when you’re talking to a bot versus a human. But people like talking to people. And if there is anything broken about customer communication today, it is that business online is impersonal. Businesses hide behind bad technology, like do-not-reply email, ticket numbers, automated replies, and faceless “contact us” forms.

When you walk into a store you can have your pick of people to talk to for help. When you open your favorite apps there isn’t a human to be found anywhere. Pretending that bots are humans is impersonal. If customers are in conversation with an entity who they think is a person, but then realise through inevitable technical limitations that it is in fact a bot, how do you imagine they will feel? And how could that feeling ever be good for business?

Bots will augment conversations between humans. They will help answer simple questions in win-win scenarios. But thankfully for everyone, they won’t replace humans any time soon.