See a carousel’s performance over time

For a quick view of how a carousel has performed over time, switch to the Sent, Completed, or Goal tab.

Here you'll see a trend graph of the activity on each day:

Note: If your carousel is a single screen to request device permissions, and the user has already granted the permission, they will be in the 'Sent' list, but won't have been shown the carousel.

Pro tip: If you see a small percentage of users completing your carousel, try reducing the number of screens.

To see how well the carousel encourages customers to take your desired action, switch to the “Goal” tab: 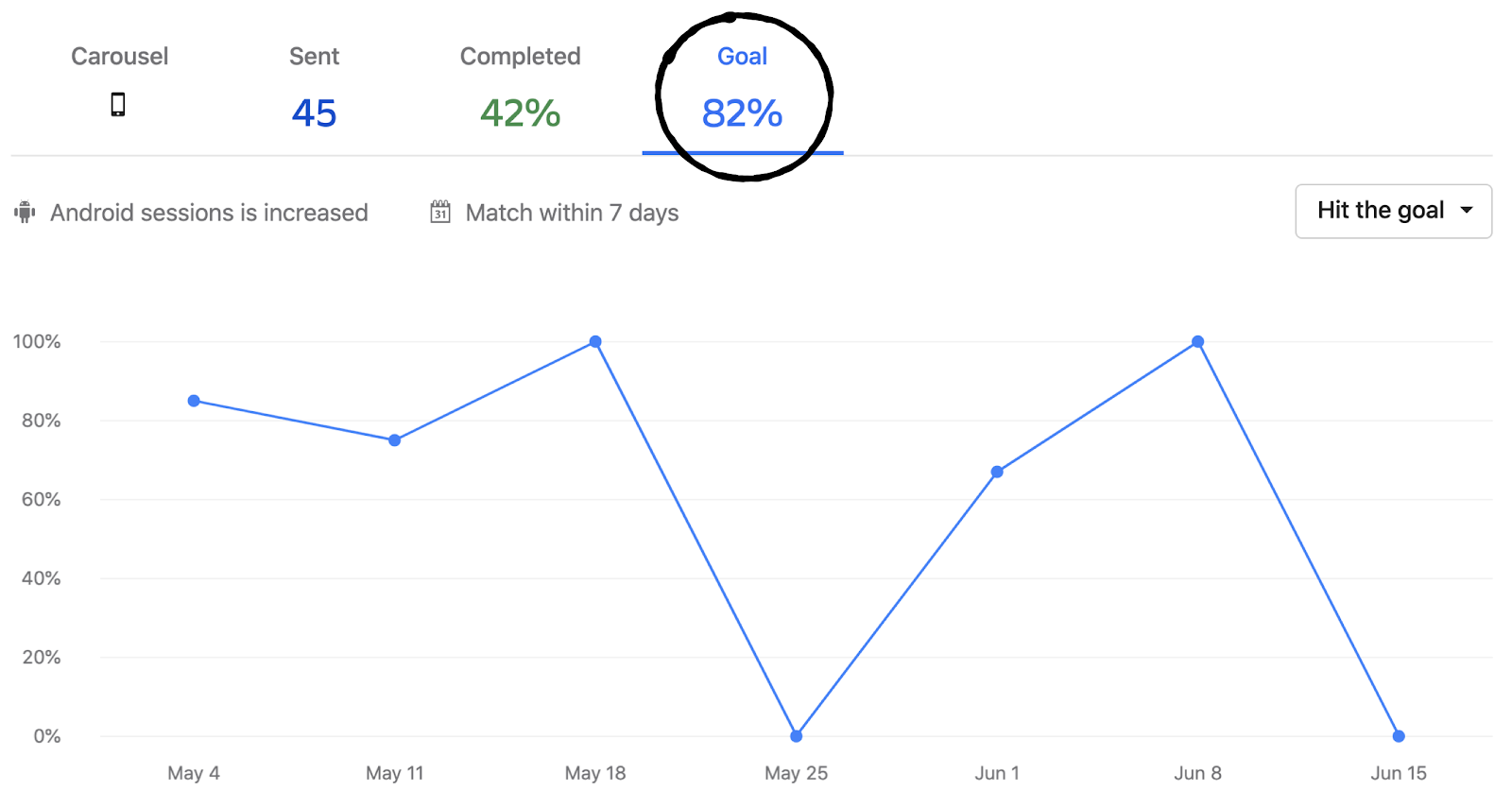 You can also filter the report to show you only the customers who hit the goal after opening the carousel:

See step-by-step engagement with a carousel

With Mobile carousels’ screen stats, it’s easy to see which screens your users engage with, and where they drop off. This allows you to identify which screens you should improve, so you can increase your carousel's overall effectiveness.

To see your carousel's screen stats, open one, and you’ll see each screen's total number of views, and the percentage of customers who viewed it: 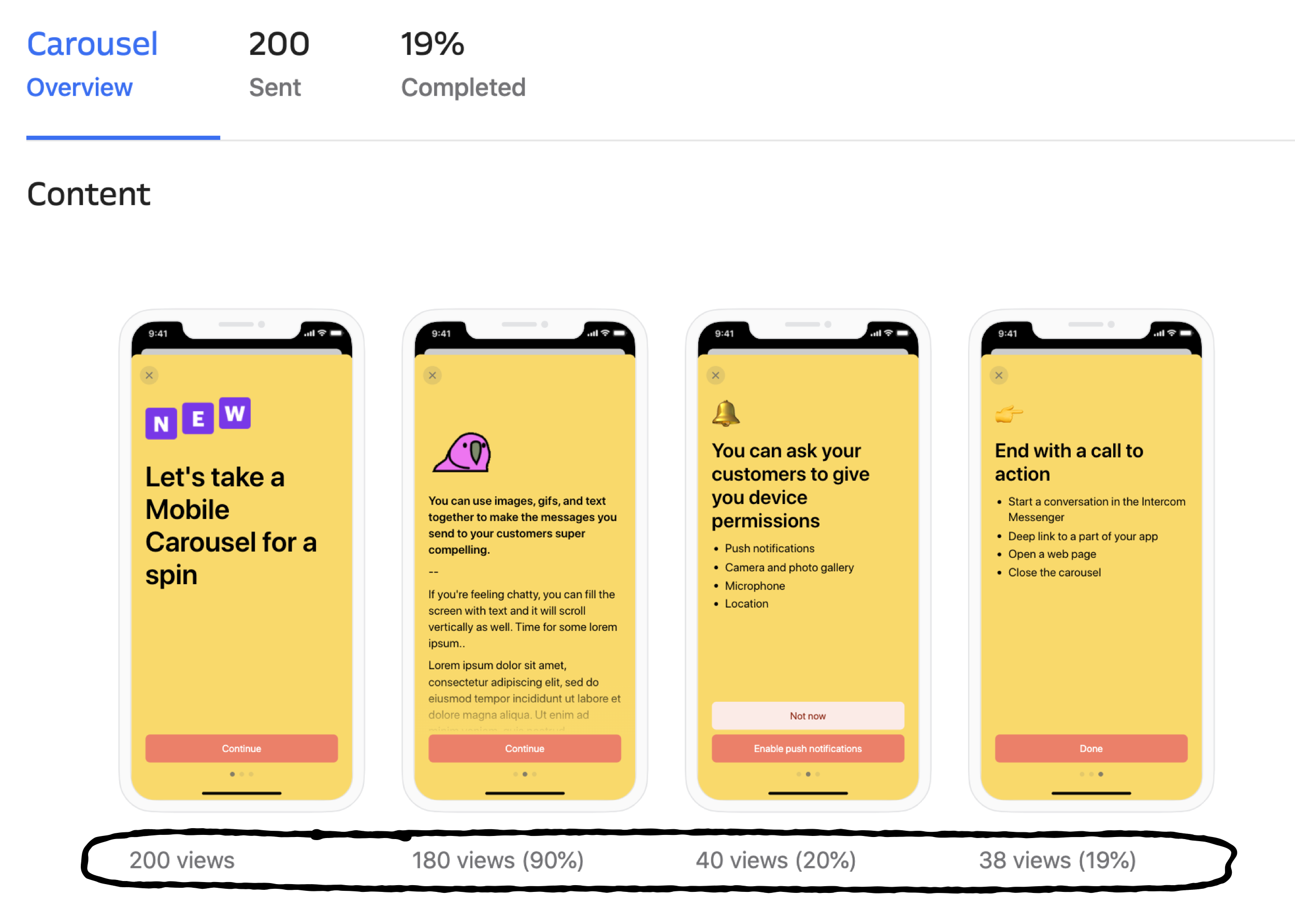 Note: If you don't have message version history in your Intercom workspace, whenever you edit a carousel the number of views on each screen is reset, so it’s a good idea to take note (or a screenshot) of how the previous version was performing. This way you can easily see if your changes have had the desired effect.

If you do have message versioning enabled in your Intercom workspace, just select a version to see the stats for each screen in that version: 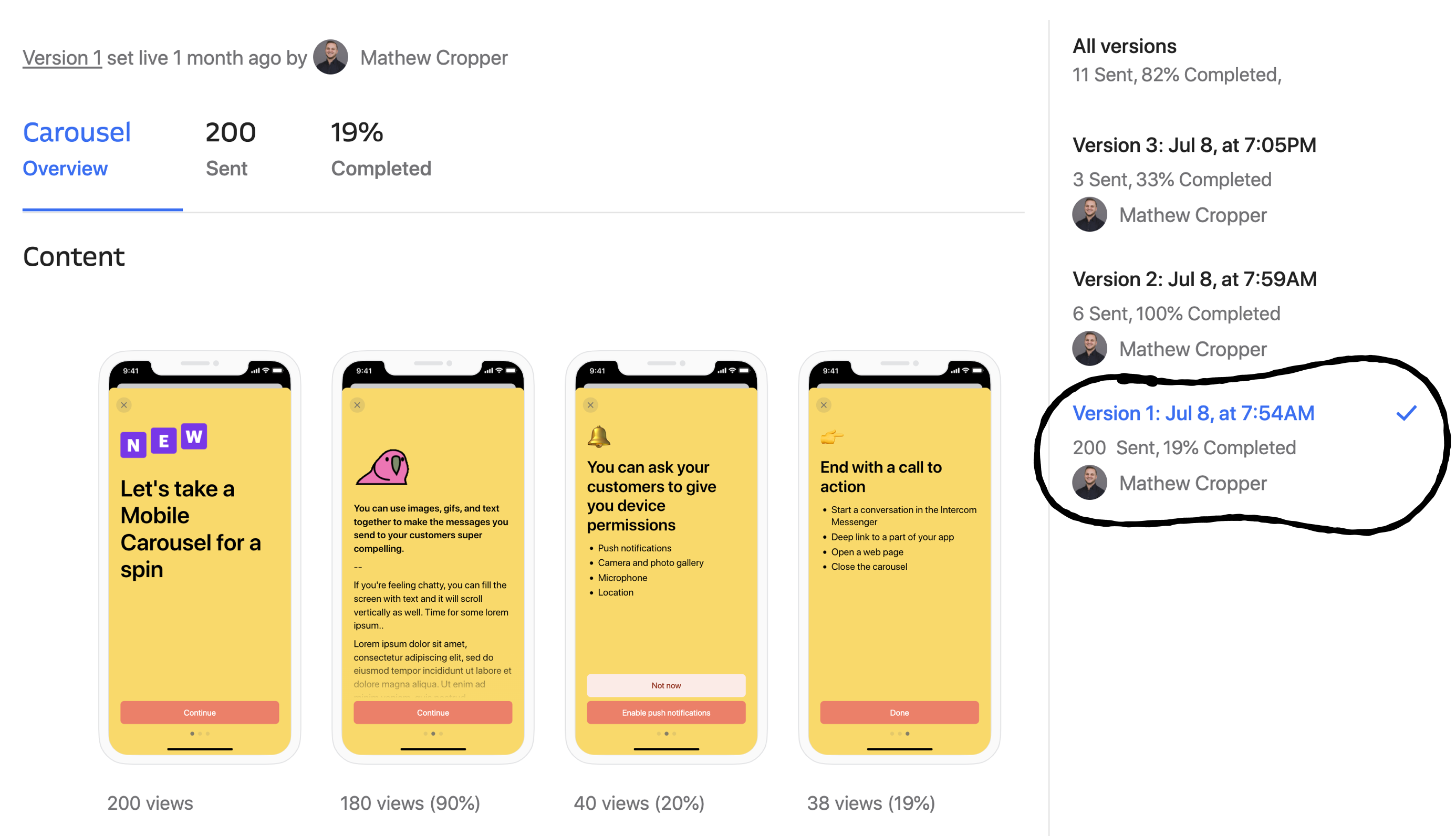 Pro tip: If you see significant drops in the percentage of total viewers from one screen to the next, that’s a key indicator that your previous screen can be improved. In the example above, the third screen has much lower engagement than the second. That’s a good indicator that the second screen could be improved.

You'll also see the number of times the button on your final screen was tapped or how many users have granted your app permissions that you request: 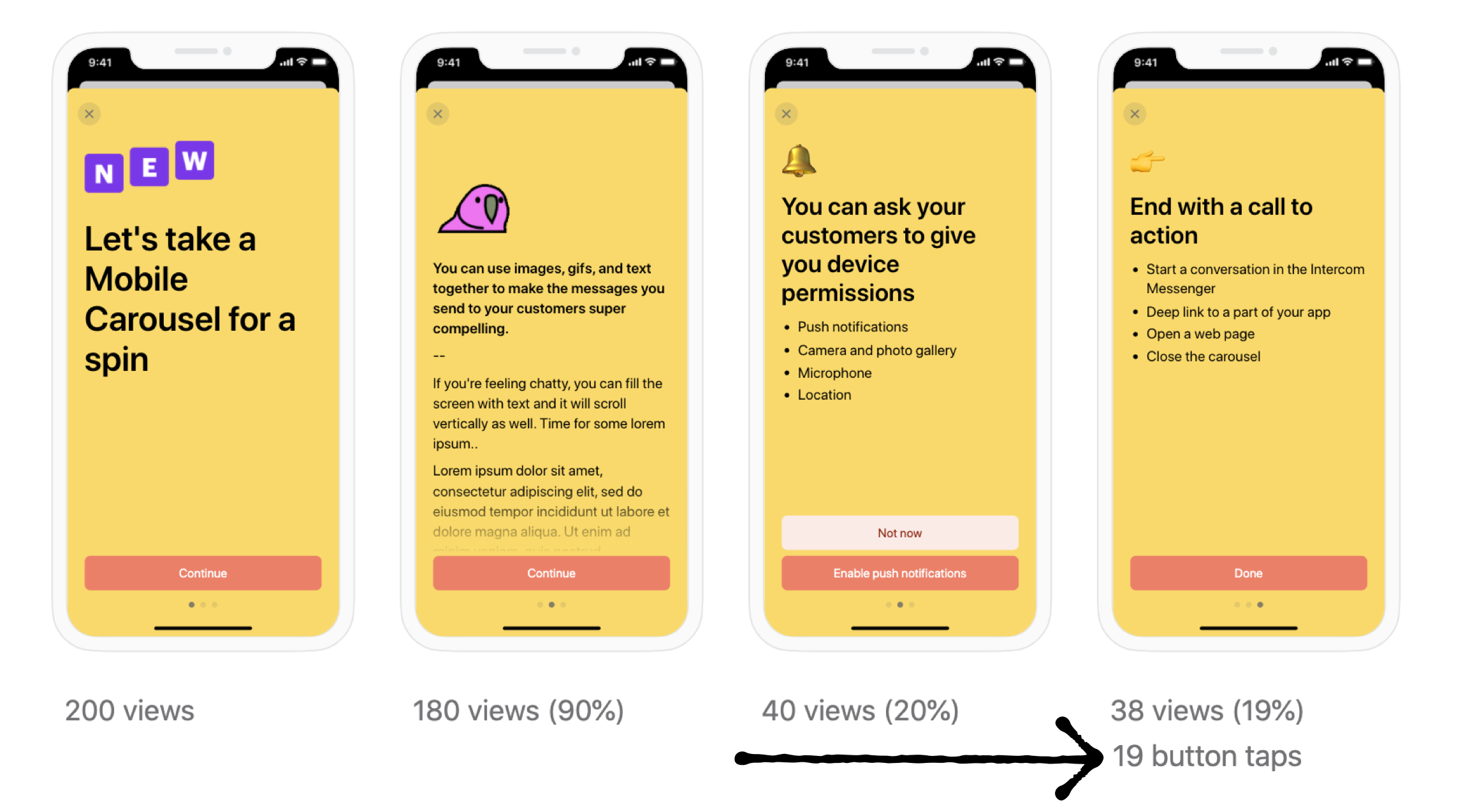 Important: Screen stats are only available on carousels created after June 21st 2020.

From any of the stats pages (Sent, Completed, or Goal) you can apply tags to, or message customers directly. This lets you identify all those who saw the carousel, so you can measure its impact on product adoption, upgrades or activation etc.

Just select the people you wish to follow up with, or tag and click "Message" or "Tag": 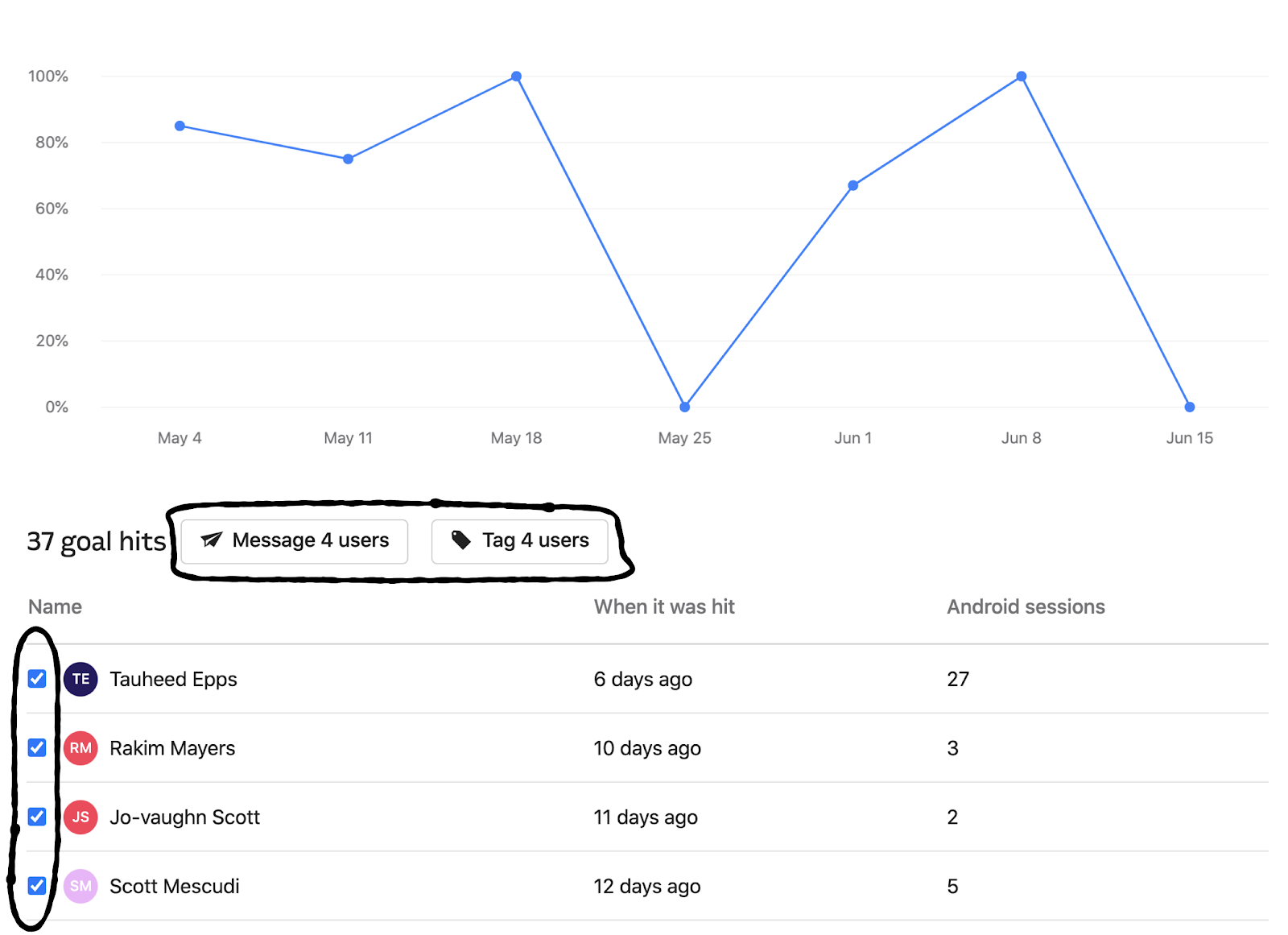 Tip: To message or tag everyone in the list you don't need to select them, just click "Message" or "Tag".

For a deeper dive into your carousel statistics, you can export your data as a CSV. Just choose 'Export CSV' under 'More' when viewing a single carousel:

Then choose the date range you'd like to see stats for:

The receipt file contains the following:

Note: receipt_id is referenced in the other two files and can be used to join the data. 👇