Mid-market and enterprise sales deals are undeniably complex. There are many decision makers, feature requests and critical dependencies that you have to navigate.

Successfully managing complex sales requires a different level of visibility into your deals. You need a structured way to see and track exactly what’s required to progress the deal forward, while also staying flexible enough to adapt to changing deal dynamics. This is true regardless of whether you’re closing new customers or growing existing business.

To get visibility into large deals, I developed a visual framework – which I call the Agile Arrow – that applies popular project management principles to the work that we do as salespeople. When implemented correctly, the result of leveraging the Agile Arrow is powerful: you are able to prioritize the people, work and outcomes that will make, or break, the deal.

Complex deals require salespeople to exercise different muscles. With large deals it’s not just about one person signing on the dotted line. You have to unpack the various initiatives in play, partner closely with internal stakeholders, strategically prioritize your efforts and come up with an action plan, all while building trust with the customer. You have to be part salesperson, part project manager.

“You have to be part salesperson, part project manager”

A few years ago, I was the relationship manager for Intercom’s largest customer, overseeing the renewal of their contract. When I first took over this account, the business relationship was trending poorly and the customer was at risk of churning. The scope and complexity of the deal was new territory for both Intercom and me. At the outset of the engagement there was a long list of issues that needed to be resolved for them to renew, including:

I wish I could tell you that I expertly navigated this deal from the start, but I didn’t. The first approach I took to managing the deal – writing longform executive summaries – left me and my team more confused than empowered. I found myself losing track of work streams and struggling to track overall deal progress, despite the wealth of information I had.

Examples of early attempts to capture and track the progress of the deal.

Information was siloed, my internal partners on the sales and product teams didn’t know where to focus their efforts, and the lack of progress was further jeopardizing our relationship with the customer. In short, I was spinning my wheels but not making forward progress.

Three key realizations, presented as acts here, helped me turn the deal around. The first turning point for me was learning about agile project management. While it was designed for software development, its principles are just as relevant to sales. Especially for complex deals, your ability to respond to change, partner closely with the customer and iterate quickly is paramount. Three agile values really resonated with me:

Embracing these agile values, I decided to pare down my executive summary. I realized that the extreme level of detail had resulted in a document that was far too cumbersome and not easily acted on. To remedy this, I applied three specific agile principles and simplified my document into three sections, each of which embodied one of the principles: 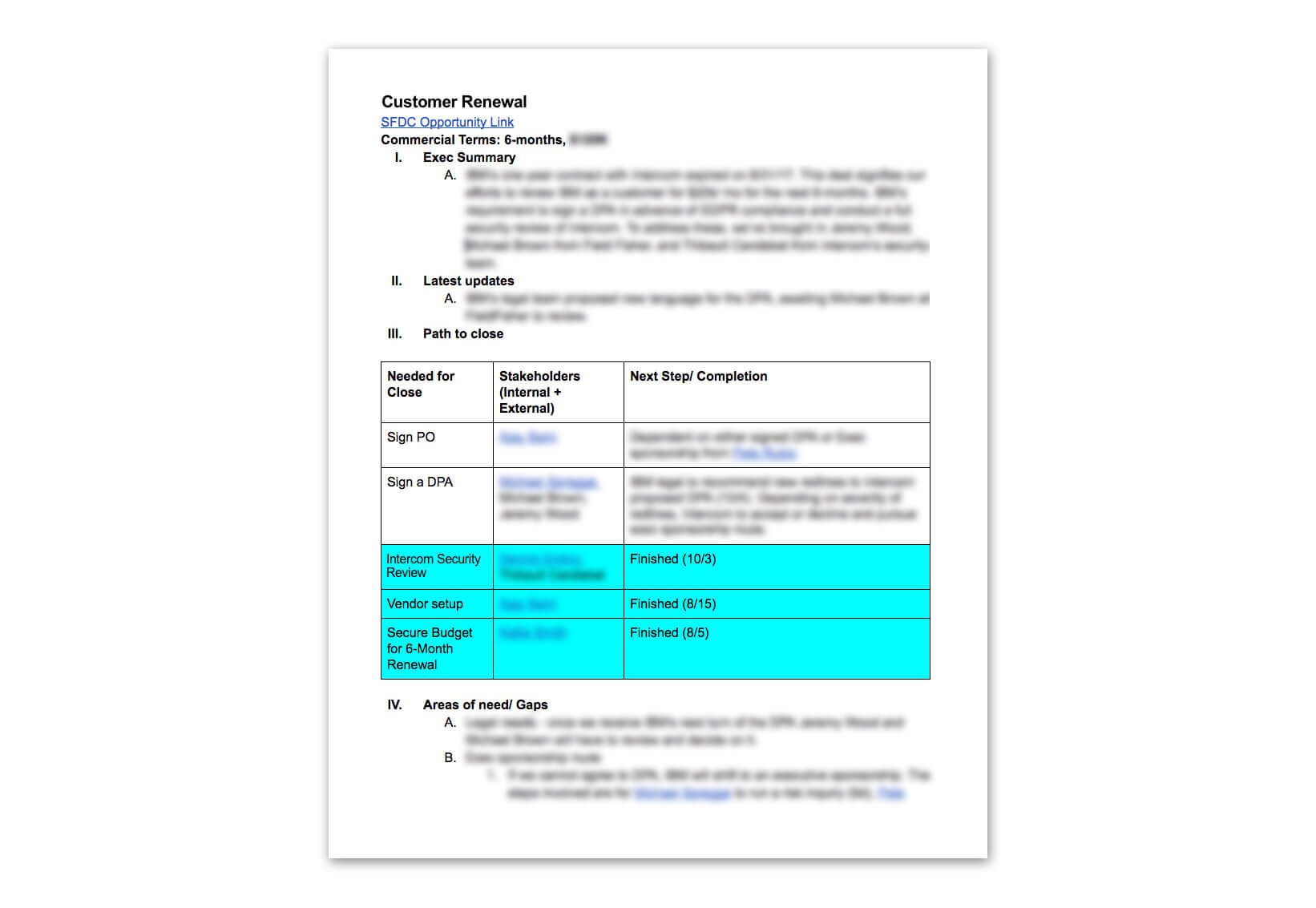 The first attempt at applying agile principles to managing the deal.

The new agile version of the document made sharing progress with stakeholders easier. It forced me to decide what information was crucial for the deal team to know and what wasn’t. I had a step-by-step path to renewal that enabled me to identify gaps and prioritize accordingly. My grasp on the deal dynamics improved, and we started to see signs of progress in the following weeks.

The next step was iterating on the document to visualize the path to renewal. There was more to be done to break down the deal into bite-sized, actionable pieces. Just as sprints are core to agile methodology, milestones, or set amounts of work, make up complex sales. Crossing each milestone – executive sponsorship, security review, compliance – moves the deal forward.

Inspired by a colleague, I drew out my path to renewal and organized it by key milestones and their associated dependencies. This became the first version of the Agile Arrow: 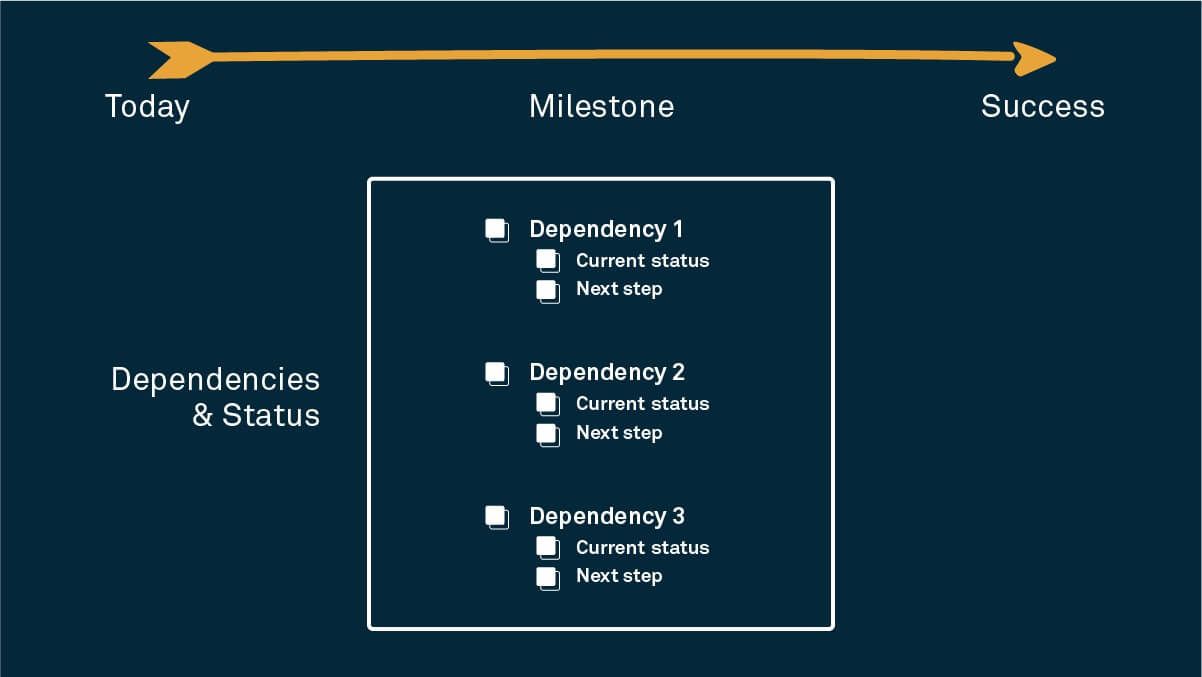 The reality is that for complex deals, the Agile Arrow looks far more like this: 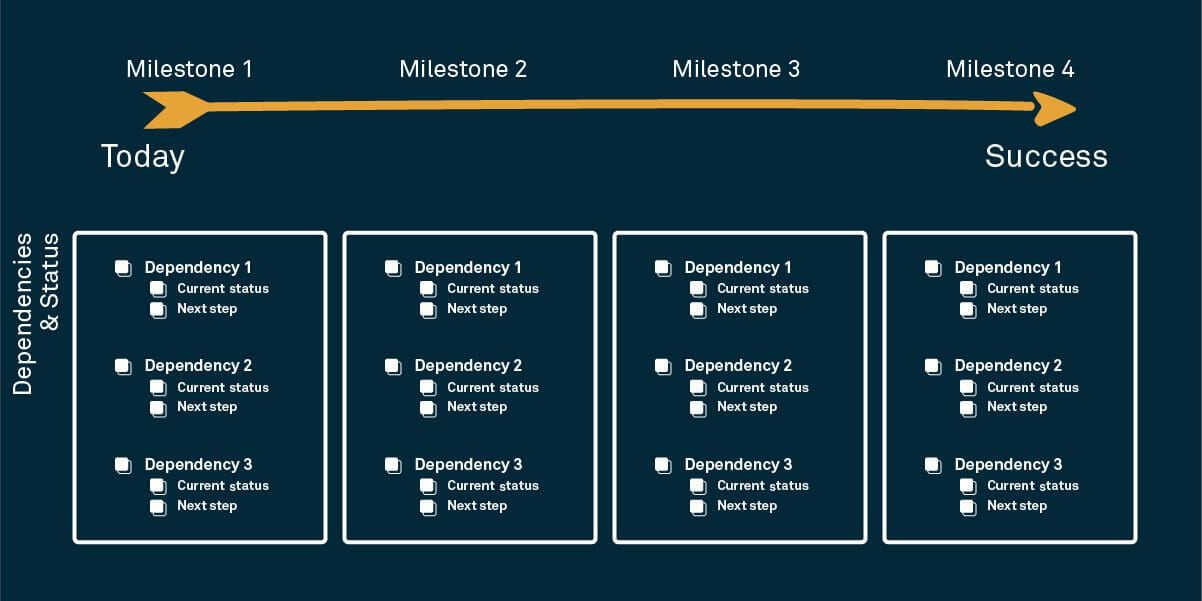 For this particular renewal, my key milestones and dependencies were: 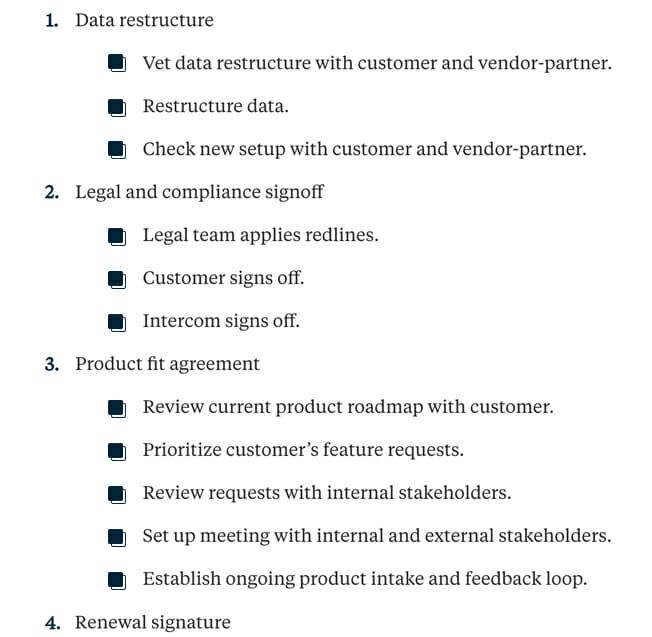 Visualizing the Agile Arrow enabled me to call out the most important milestones for the deal and get ahead of the dependencies required to cross each one. I could easily track overall deal progress without losing focus at each stage – admittedly, I also love checklists. I was able to identify non-impactful work streams and then quickly deprioritize them.

One of the values that had resonated with me when I discovered agile is “individuals and interactions over processes and tools.” As I continued to apply the Agile Arrow, I realized that I needed a better way to capture the “who,” the individuals whose actions would impact the deal.

I decided to leverage the DACI decision-making framework, which we use across broadly at Intercom, to clarify stakeholder roles in the deal. The acronym DACI stands for: Driver, Approver, Contributor and Informed. It establishes who’s responsible for driving the deal forward, who’s making key decisions, who’s influencing decisions and who’s simply in the loop. 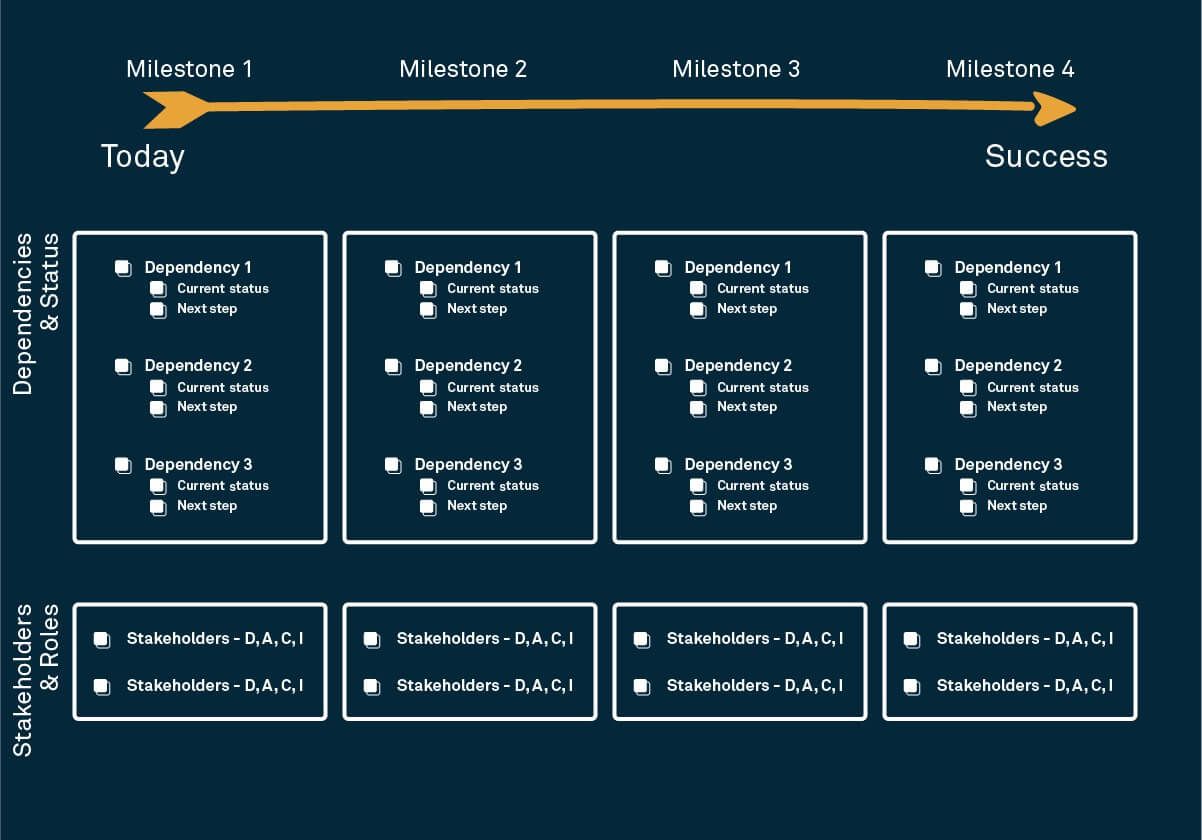 In my case, the main stakeholders for the renewal were:

By incorporating DACI into my framework, I added a personal layer to managing the deal. More than that, it enabled me track who on the customer’s side was involved with the deal, their roles and their responsibilities. That way, I could tailor my approach to communicate only what was relevant to each individual stakeholder.

Closing a $250k renewal with the Agile Arrow

The Agile Arrow was crucial to bringing a $250k renewal back from the brink and closing it. Its jobs were manifold: be flexible enough to account for changing priorities, enable me to visually track deal progress, and meaningfully surface individual stakeholders and their priorities. The result was that I was able to identify the initiatives that I needed to push hardest for and effectively collaborate with my internal partners to drive key outcomes.

“With complex sales, priorities will change, and you must be able to adapt”

This framework has become part of my playbook for closing big deals and as a manager, is a tool that I use with my sales reps. The biggest lessons I learned and share with my team are:

To be great at closing complex deals, you need to do more than just sell. You have to wear another hat as a project manager – constantly in control of the deal and its progress.