Expensify improved the support and sales experience for millions of customers

With Jason Mills, Director of Sales and Success at Expensify

Expensify takes the hassle out of expense reporting for over three million users and their accounting departments all over the world. Matching this vision of simple, personalized accounting with communication channels with customers is critical to Expensify’s success.

When Expensify first started in 2008, the company did what lots of fast-growing startups do: it received sales and support questions via email. By 2014, Expensify’s user base had exploded to over two million users — and their support system was breaking. Users complained about slow response times, emails from lucrative leads and customers were getting buried under a large volume of inbound requests, and there was a wide gap between the number of visitors on Expensify’s marketing site and the number of leads signing up.

At first Jason Mills, Director of Sales and Success at Expensify, tried switching to a ticketing solution for the company’s support team while sticking with email for sales. But the result was almost worse: the combination created more silos between teams and further slowed response times.

“Our support team had to do a ton of detective work every time they came back to an email chain or support ticket, trying to anticipate what the next question would be,” Mills says.

Returning to the drawing board, Expensify realized it needed a scalable way to return to the basics of personalized communication:

Expensify initially installed Intercom Inbox, directing inbound support requests to a team inbox shared by 18 agents around the world. Every time a customer inquiry appears, an agent can see live user profiles next to the request, which paints a rich picture of who they’re talking to: 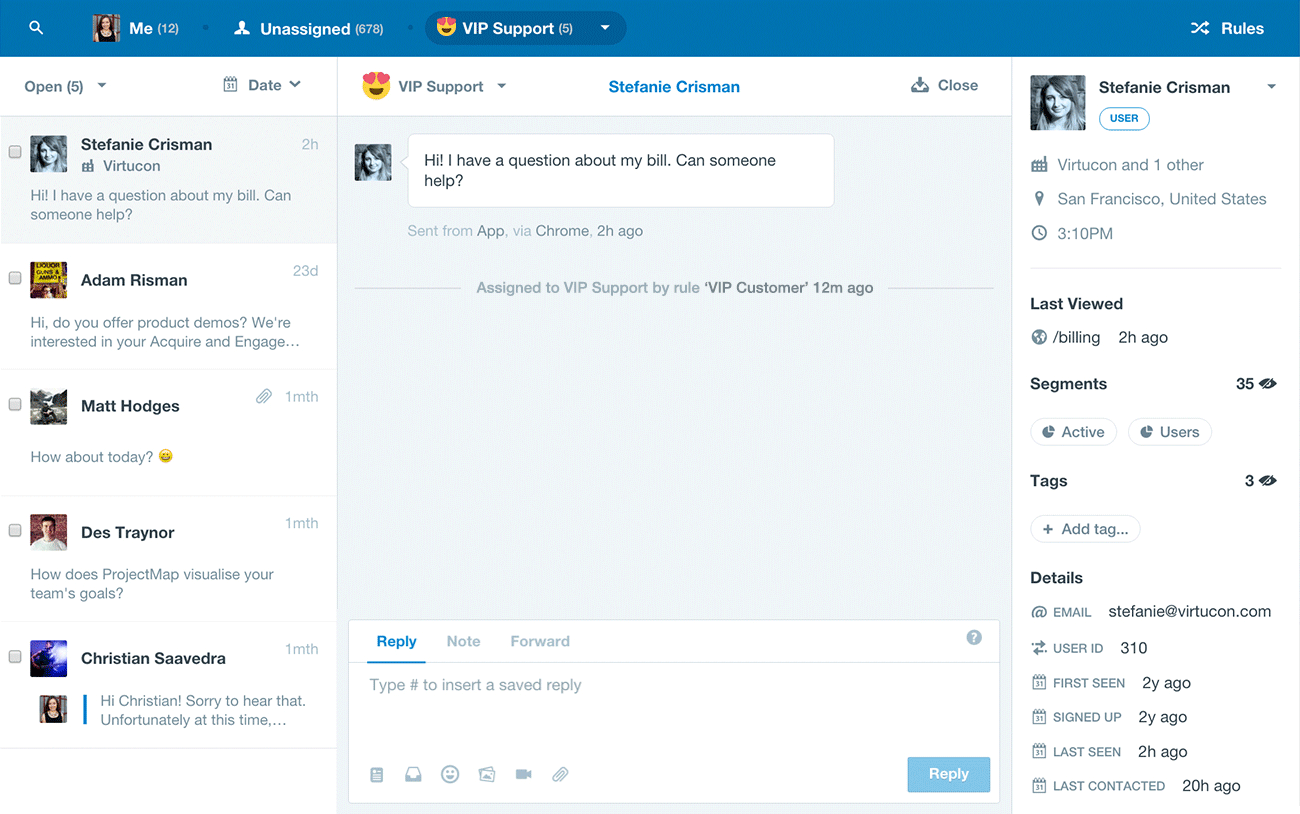 “Through Intercom we can tell if the person is an admin for a large paying customer, a free user, a user who’s about to convert, etc.,” says Mills. "Intercom knows everything about our users, which helps our team all get on the same page faster."

Pairing support queries with user data empowers success agents to go beyond simply answering the question at hand. For example, if a success agent sees that a customer could benefit from a new release, he or she can proactively recommend it during a support exchange.

To encourage even more collaboration between teams, Expensify recently moved its sales team to Intercom by turning on Intercom’s live chat solution, on a few pages on the Expensify website. Expensify watched requests trickle in before excitedly making it available across the entire website. Looking back, Mills says, Expensify should have been less conservative about rolling it out.

Intercom reduces the usual barriers for us to capture leads. If your initial interaction with a company is a cool website with friendly language, and then you have to fill out a big form to get any questions answered, that’s not a great experience.

Since migrating to Intercom, Expensify has brought down response time to customers and leads to roughly 30 minutes, less than half the previous time, while managing even more conversations a month.

In addition, the team at Expensify is developing more positive working relationships with customers. “Intercom is really changing the tone of our conversations,” Barrett says. “A conversation, by default, is much more casual than email, which can prevent tempers from flaring as we work out their support issue. Often the angry emails we received happened because people felt like they had to overcompensate and fill a whole page with capital letters.”

Intercom has changed the way our sales and support teams collaborate,” Mills says of the entire team migration. “It’s costly to acquire a single customer, so having a single tool that lets us track, coach and support users through every step of the funnel is priceless.

Founded in 2008, Expensify is a financial services startup that provides an online expense management service for millions of customers around the world.
www.expensify.com