When you think of Intercom, you probably think of software, our Messenger, perhaps this blog. You probably don’t think of comics, but for many Intercom staff, the “Intercomic” has become a coveted part of their job here, a very personal marker of progress and belonging. Let me explain.

To celebrate each year that someone is with the company, we create a portrait to mark the occasion. These are meticulous comic-book style portraits filled with insights, details and jokes compiled by the employee’s manager and team to represent that person’s life both inside and outside the office. As a Production Designer for the Brand Design Studio, my role is to oversee the creation of these Intercomics.

Intercomics are a very special part of our culture, acting as a highly visible way that we recognize and celebrate each other. As their work anniversary (or Interversary as we call it) approaches, people feel a real sense of excitement and suspense – each comic is a closely guarded secret until the day of the anniversary, when their manager posts the portrait alongside a note talking through their achievements for the year on our internal message board.

Then, they live on as prints and on monitors decorating the walls of our offices around the world, a constant reminder of the importance we place on our people. The prominence we place on our Intercomics showcases the central role of fun and imagination in the Intercom culture. 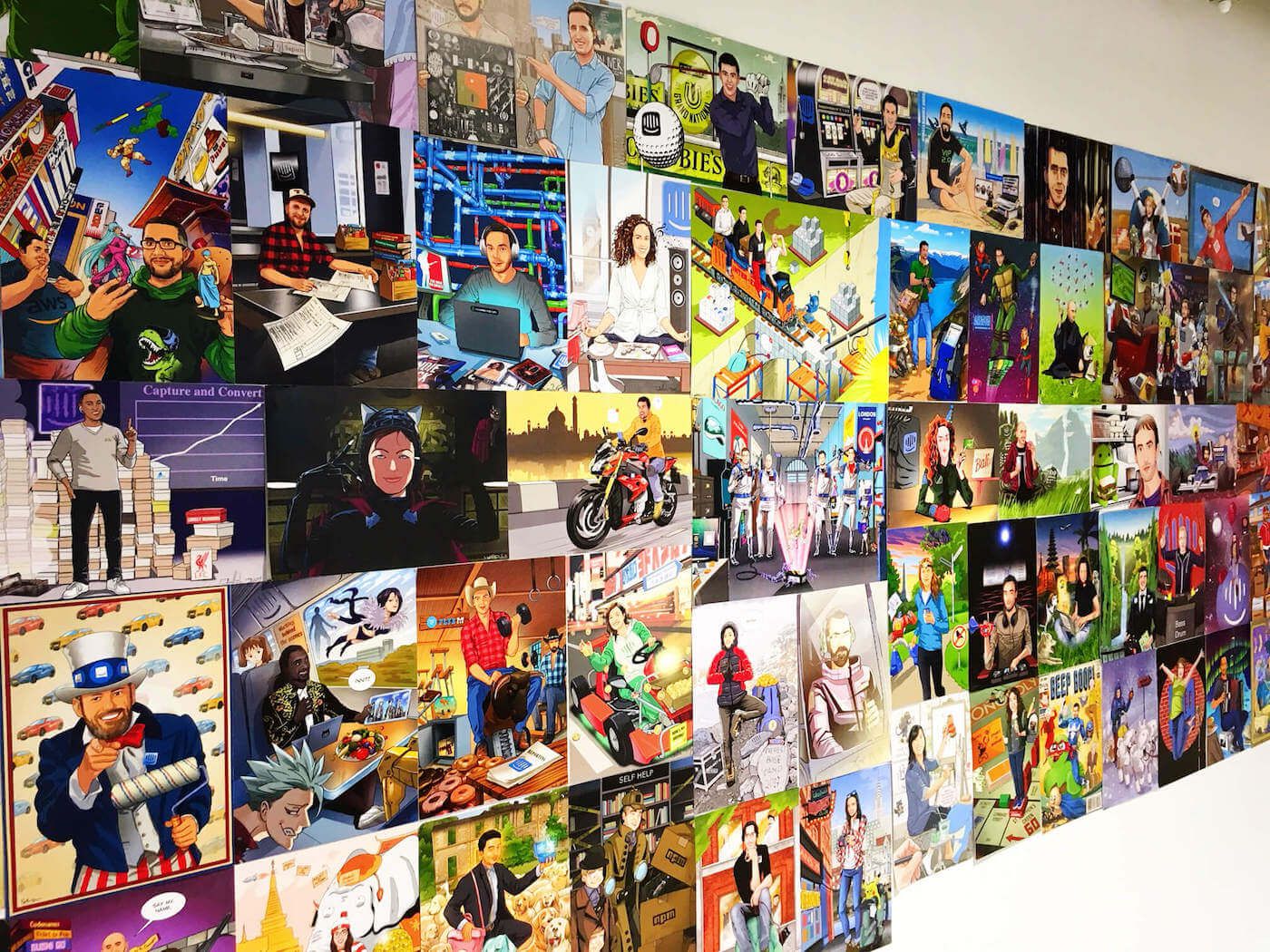 How did it all begin?

The first Intercomic (although that phrase wasn’t coined at the time) was created in 2014 when I was asked to create a comic for an intern who was finishing up their time at the company. What I thought would be a one-off commission generated a very enthusiastic response, so I was asked to create another, and pretty quickly Intercomics as we know them were born.

We don’t just celebrate the individuals who work at Intercom with these portraits. Every year, we create a special Intercomic to mark the company’s birthday, featuring the four co-founders – Eoghan, Des, Ciaran and David – and commemorating the recent achievements and future goals of the company as a whole. It tries to encapsulate where the company is, and above all, where it’s going.

Creating all the portraits is an extensive process, involving an incredible level of care and attention to detail. It’s a full-time focus for me, and I enlist the help of a team of talented illustrators to work on all the portraits. We are extremely lucky to have found a group of versatile artists who are so accomplished at the whole range of skills required for each portrait, from sketching, inking and coloring to replicating faces, anatomy and architecture.

As the company has grown, the number of portraits we create has risen dramatically each year, with dozens of Intercomics being worked on at any given time. That’s because every Intercomic takes about 2 months to complete, requiring significant forward planning to get each portrait delivered on time for the employee’s anniversary, which we track meticulously on a calendar.

“We’re not just aiming for a good likeness, but trying to capture the essence of the person we’re depicting”

We send a request for a brief to managers well in advance of the anniversary, asking for ideas on how to depict the person, what their interests are, what achievements are they most proud of. These can take some time for the managers to compile, so we offer guidelines to help make the process as seamless as possible.

The Intercomic brief focuses on the person’s professional achievements, personal or work-related passions and contributions they’ve made to their team and to the company.

Once I review the brief and follow up with any potential questions to managers, it’s up to us to turn these briefs into portraits that capture the personality and achievements of the person. This is a flight of imagination, as we place the person in scenarios and situations ranging from famous movie scenes to iconic locations.

Central to the success of every Intercomic is the face, unsurprisingly – that is always the most important part of any portrait. While we use photographs for reference, this process isn’t about tracing a person’s features – we’re not just aiming for a good likeness, but trying to capture the essence of the person we’re depicting.

We then build up the background in layers, allowing us to move or change elements as necessary. Each Intercomic is typically comprised of at least 20 different layers.

The Intercomic we present to our founders marking the company’s birthday is an even more elaborate production. This example features the founders onboard the Inter-Express Train as we “cross the chasm”. 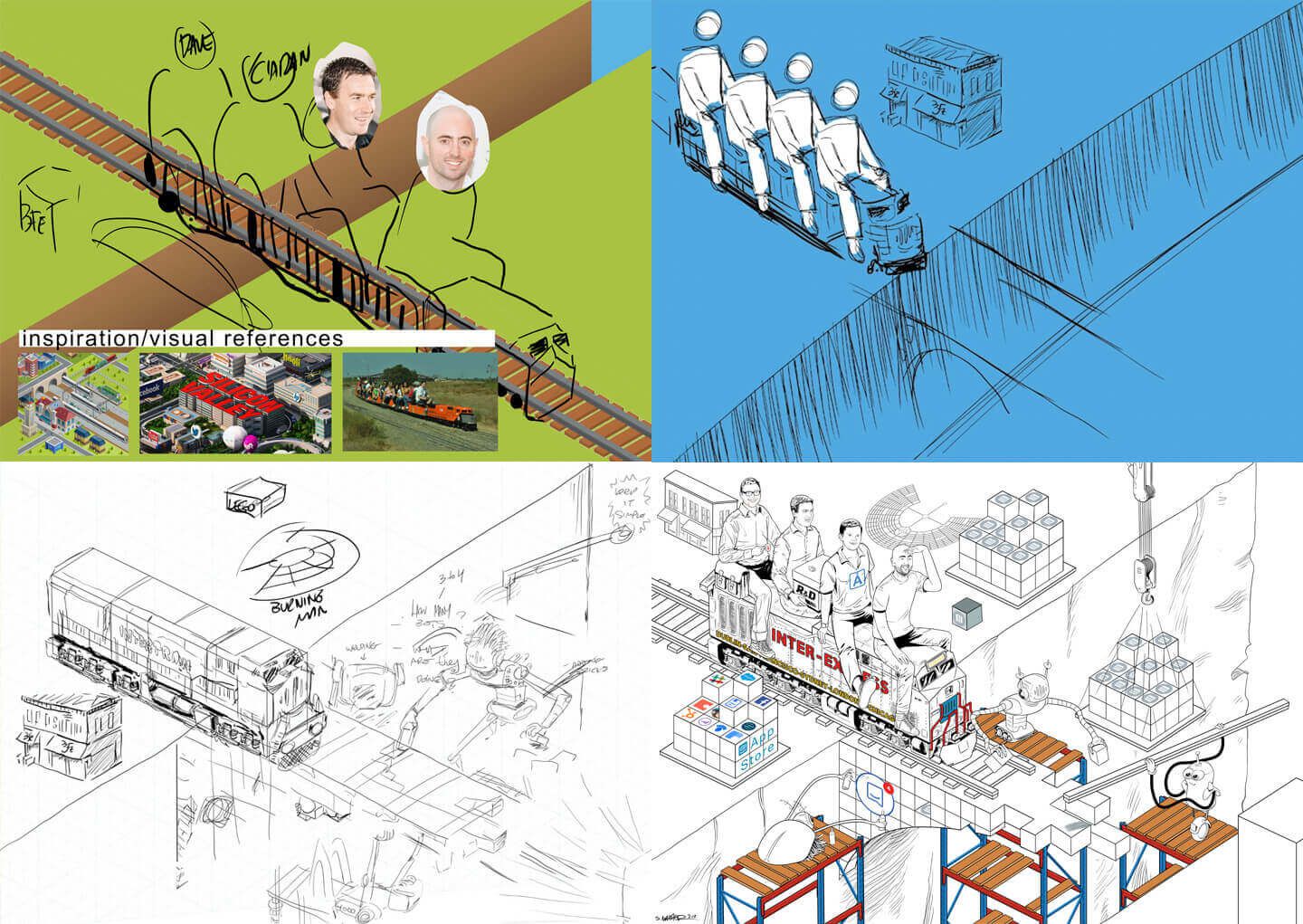 Unlike most other Intercomics, this one has to include four different people and a lot of information. So, we tried to keep as much as possible on separate layers. This particular Intercomic has almost 700 layers. Thanks to this, all of the parts were easily moved, rotated and changed during the drawing to adjust things like composition, proportion and perspective.

The scene we were depicting, with so many details and company in-jokes, required exceptional attention to detail, as can be seen on the Inter-Express train. We also included a selection of bots, representing Intercom’s Operator, Answer and Custom Bots, and we wanted to emulate the design of a Dr Seuss character, with long whimsical arms.

We worked on all of the major elements first for this Intercomic, gathering feedback from a great number of people across the company, before fine-tuning all of the smaller details and adding things like the logos, completing the coloring and putting everything in the right place.

The drawing process for this Intercomic took 22 hours in total and the research and feedback took about 5 hours. And this is how it turned out: 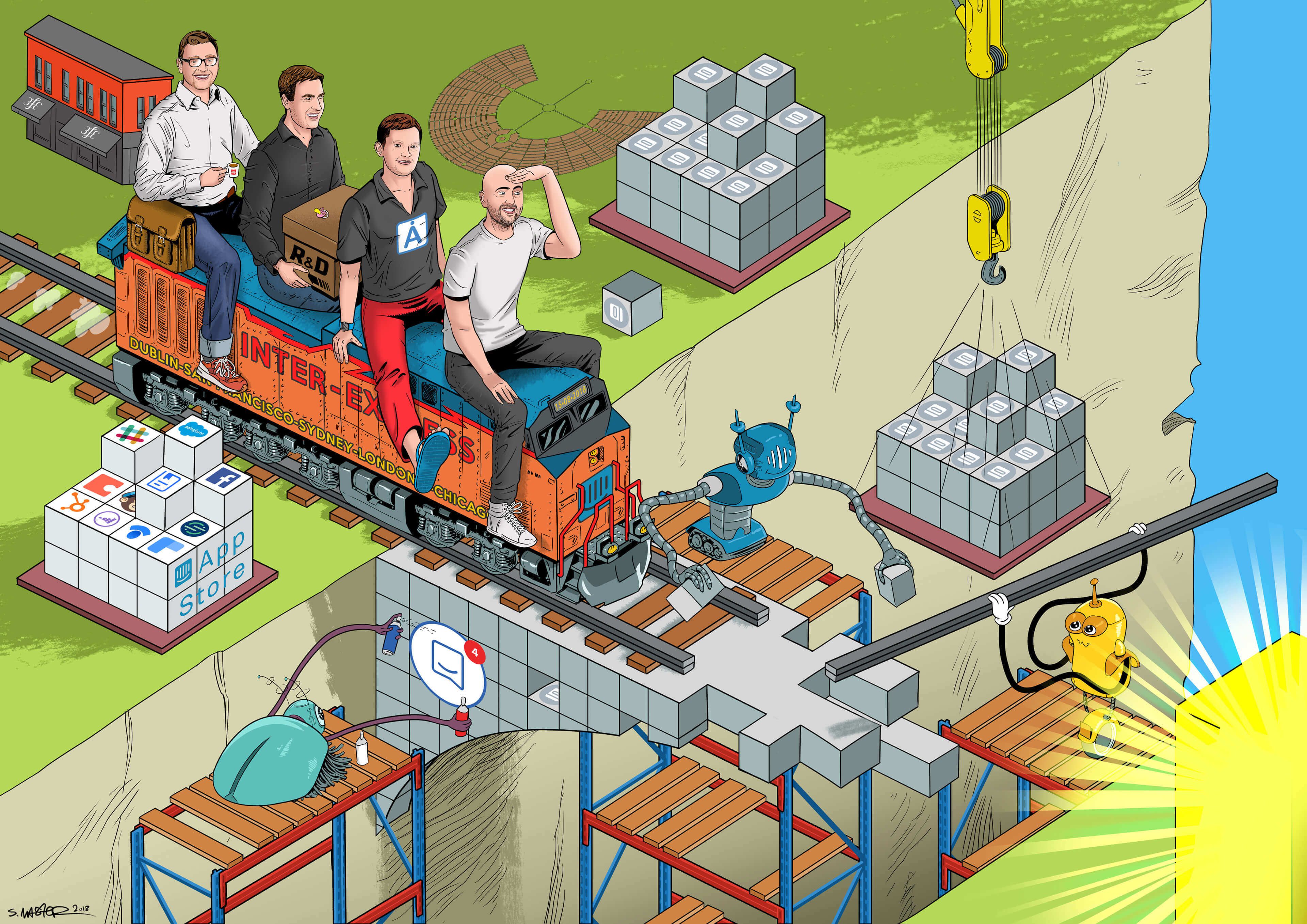 Our culture in comics

In a high growth company like Intercom, it would be easy to get caught up in our everyday work priorities, meetings and emails, so we work hard to create a company culture that celebrates the work of each and every person.

Every great company relies on the work of great people. We are all the same in so many ways, and yet different in so many more. We all have stories to tell. Once you get to know someone, you realize how infinitely fascinating we all are.

Intercom thrives by having such a diverse, smart, interesting and fun group of people working here. Intercomics are a fun and imaginative way to celebrate and recognize our uniqueness. If you happen to visit any of our offices at any stage, take some time to look at our portraits hanging on the walls. You will see us. You will see Intercom.