Part two of our four-part podcast series exploring our "new normal" – with life lived entirely in the home.

“Home where the heart is,” as the saying goes. And for now, it’s where you’ll find the office and school and the shops and concerts, too. H.O.M.E. is a special four-part series on Inside Intercom that explores how people across many industries and countries are managing to persevere with the help of technology.

When it’s all said and done, we’ll have covered the following themes:

Last week, we took a look at how folks are staying physically fit and mentally positive during the pandemic. This week, our second episode explores how people are spending their time unwinding after work at a time when the physical boundary between the two has never been hazier.

How do you avoid rolling out of bed and straight into your desk chair? How do you pull the plug on work and unwind when your bosses are a click away on your computer that just so happens to be one room over? And when you’re starved for human contact, how do you bring the outside world in?

One way is through video chat. Dispersed families are hosting weekly check-ins. Artists are inspring people to doodle during lunch. Bands are playing intimate, lo-fi concerts for fans on Instagram. Even dating has gone remote.

To take a deeper look at life at home after work is done, we caught up with five people who are thinking creatively about our social lives in the “new normal.” This episode feature conversations with:

If you enjoy the conversation, check out more episodes of our podcast. You can subscribe on iTunes, stream on Spotify, or grab the RSS feed in your player of choice. also put together a companion guide to the episode, which you can read below.

Screens: our windows to the world

With health organizations and governments strongly cautioning against large gatherings, the days of going out for a trivia night or seeing a concert with friends have been put on hold. Even when we do get the all clear to leave our homes, the return to normal life will be gradual.

In the meantime, phone calls and video chats have become our best tool not just for replacing company meetings but for staying in touch with family and friends, too. Traffic has skyrocketed on video platforms like Livestorm, a conferencing and webinar provider based in France. Previously focused on B2B offerings, CEO Gilles Bertaux made the decision to make a free version available direct to consumers – no app required. “Right from your browser, you can host either a livestream with thousands of participants, or you can just have a meeting one-to-one,” he explains.

As Covid-19 swept through Europe, Livestorm saw its user base more than double in less than a month. Though the company had strategized to expand its infrastructure next year, it scrambled to roll out those plans in just three days.

Livestorm has seen a huge jump in usage by legacy companies as they’re adjusting to the new remote reality. Organizations that didn’t previously rely on live streaming are suddenly finding value in the way potential it has to transform their business.

Going beyond corporate use, the creative applications have surprised Bertaux and his team. “In the arts, we’re seeing people host online courses, having people join to learn how to do watercolor paintings, for example,” he says. From pop-up concerts to arts and crafts lessons, people around the world are leaning on the platform to connect with each other off the clock. “We have those nights where we play board games or have a drink together or something, just to socialize and to have a culture of going and getting out and eating together and being together.”

Another person who is using creatively using screens to stay connected is Alison Spittle. For this comedian, March was to be a big earning month – kicking off a nationwide tour that would finance her 2020. However as the UK and Irish governments (note: Alison is Irish but based in the UK) required the cancellation of events, this was not to be.

Alison quickly started hosting covideo parties, a simple idea where everyone taking part watches the same film on Netflix at the same time each evening. Each night, Alison dresses up in the theme of the film, sounds the klaxon for fans to press play, moderates the Twitter conversation and then hosts an Insta Live session after where she invites people to join for discussion about the film they’ve watched. It’s a multi-platform, multi-household way for people to feel part of something outside their own home, and it’s been a huge success.

The chosen films have regularly trended as “most watched” on Ireland’s Netflix, no doubt creating confusion for those not in the know as to why Space Jam, Steel Magnolias, and Matilda are suddenly (if briefly) hot properties again. What started as purely a social outlet has now led to commercial opportunity for Spittle with Flipz Pretzel’s offering to sponsor and the BBC commissioning their own covideo party with her for a newly released TV show. At first, she was unsure what to make of the opportunity, she says “because in my mind, I did it because I’m a stand up comedian and that’s my identity. And I like doing stand up. And this is a different thing. And I felt that people might judge me, but they’ve been lovely and everyone understands. And it’s cool and it’s been nice. And it’s been great.” 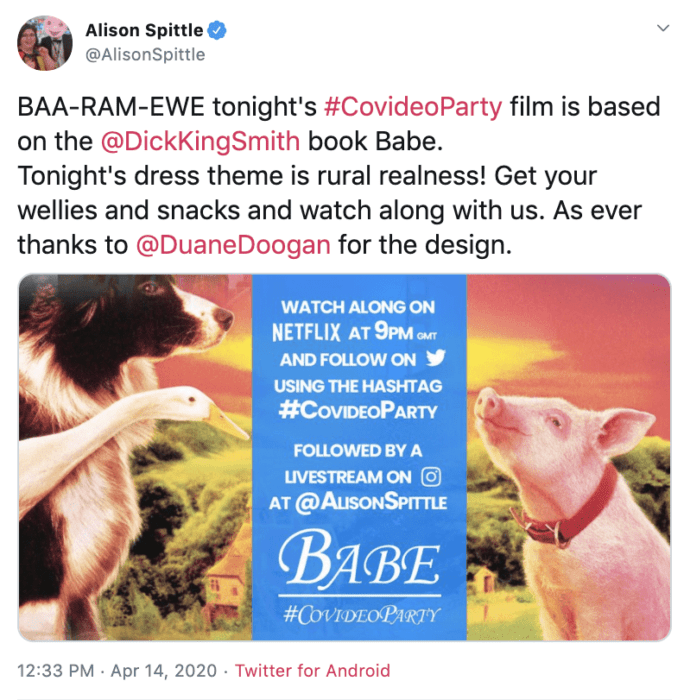 Alison’s watch-alongs happen each evening at 9pm GMT+1 with a film chosen by poll posted on her Twitter account. You can get involved by checking out what the upcoming film is and logging on at the same time as folk in Ireland and the UK.

Combatting the loneliness of old age

The elderly make up one demographic that has been especially hard hit by social distancing requirements. Already isolated during the best of times, the grandparents and older relatives have now been forced to think creatively about how to get help with the basics: food, medicine, and social interaction, which is essential to the well-being of seniors, according to the National Institute on Aging.

“Social distancing doesn’t have to mean social isolation, and actually one of the things families and neighbors can do most is call an older person in their lives”

Enter Grandpal, an app designed to help families take better care of their loved ones. While the team used to help coordinate in-person visits and check-ins before the pandemic, that’s not an option these days. “When we stopped the visits, it forced us to think digitally,” explains CEO Brian Daly. “That’s happening now in the form of the Grandpal virtual coffee shop, the idea being to grab a cup of tea, coffee, a biscuit or two, and jump on a call with someone.”

Grandpal is also developing an app to guide folks through tough times by helping households coordinate calendars, virtual visits, medication schedules, and more. The idea is to inspire larger families to come up with creative ways to show love to older relatives, whether it’s sending a postcard, painting a picture, or simply having a conversation. “Social distancing doesn’t have to mean social isolation, and actually one of the things families and neighbors can do most is call an older person in their lives.”

Although online dating has become perfectly natural over the past decade and a half, few may be used to conducting their search for a partner without being able to meet up in person for the first few dates. The coronavirus has changed all of that, perhaps forever.

No one has a better view of this than matchmaker Nina Trickey, who runs The Guardian’s Blind Date column. Previously focused on setting up two strangers on physical dates in London and surrounding cities, the column’s mission has shifted toward helping people find love digitally.

“It’s tricky, because I can’t meet them in person,” Trickey says. “Your impression of people is much better when it’s in person instead of an email.”

But with our new normal opening singles up to the idea of dating long distance even if they live in the same neighborhood, Trickey has found new freedom in who she matches. “We’ve gone quite long-distance with one of the dates coming up, which I won’t spoil,” she says. “I carry on matching based on age group, general interests, and that kind of thing.” 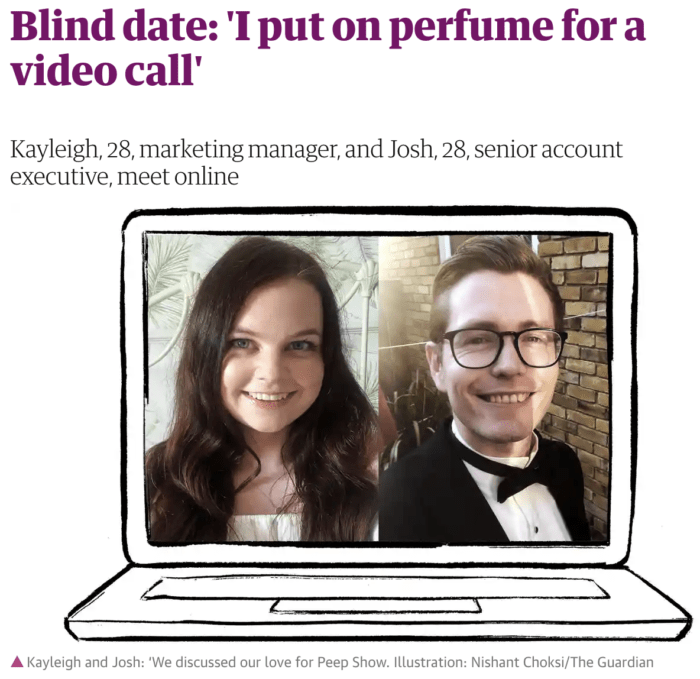 Of course, one of the benefits of dating via webcam is that no one knows about the Woody Woodpecker undies you might be wearing out of shot, as one Blind Date superfan speculated when a would-be paramour logged on to his virtual date wearing a tuxedo. On this particular meetup, his counterpart admitted she had applied a splash of perfume for a confidence boost.

It goes to show that our current health crisis is casting all aspects of life in a new light, getting us to think differently about things we theoretically did for others and realizing that perhaps we were doing them for ourselves all long. As we continue to navigate the bizarre nature of work, life, and love in the confines of the same four walls, what else will we discover?

Original artwork for this series was created by Natalie Nelson. Natalie is an illustrator, picture book maker, and collage artist. You can find out more about her work here.