The most important tasks for any early stage startup are to write code and talk to users. When we started Intercom the latter was my job.

About 50 percent of my time was spent communicating with potential users, whether that was asking them to try Intercom over email, meeting them at conferences, responding to them in blog comments or talking to them on Hacker News.

Looking back, I didn’t see these activities as marketing with a capital M, but they absolutely were. They allowed us to reach an entirely new audience who would never have heard of Intercom had I not talked to them. If you were to look at the first 100 paying customers for Intercom, I’d bet most came from one of these channels.

Probably the most common question I get about this phase is some version of “Where did you find the time?”, and the answer I give is always the same: the same place we found the time for writing code, designing our product, raising capital, etc. You have the time; you’ve just decided that these tasks are lower priority. I didn’t.

There’s a great story in Dr. Seuss’ “The 500 Hats of Bartholomew Cubbins.” It’s about a boy who, no matter how many hats he removes, always finds another underneath. Founding a startup is a lot like this. You’re likely going to wear multiple hats  and juggle them continuously.

In the very early days of Intercom the marketing hat fell on my head, but I’d be doing marketing a disservice (and 2011 Des a disservice) if I said that’s what I thought I was doing. I didn’t have a perfectly mapped out startup marketing strategy. I certainly didn’t have an “acquisition strategy.” The plan was simple: get people to learn about Intercom and talk about Intercom. So I was the person responsible for writing the blog, meeting people at conferences, speaking onstage, etc.

Choosing a tactic for your addressable market

Does that mean that everyone should invest in content marketing early on? Absolutely not. Depending on the industry, customer type and addressable market at your disposal, picking the wrong marketing tactic can leave you dead before you’ve even started.

If you’re building a new iPhone game aimed at children under 12, opinionated articles on the industry aren’t going to help you get traction. At a fundamental level, marketing is about reaching people. And you can’t reach people in ways that they’re not reachable. Much like you can’t ring people who don’t have a phone, you can’t “content market” to people who don’t read nor to industries that aren’t as self reflective as SaaS. You have to start by understanding the behaviors of the people you’re trying to reach, and then choose a particular marketing tactic based on those exhibited behaviors.

The reality is you need to get known and trusted by your audience, and to do that you need to build a presence in the channels where your audience is looking for solutions that your product provides. 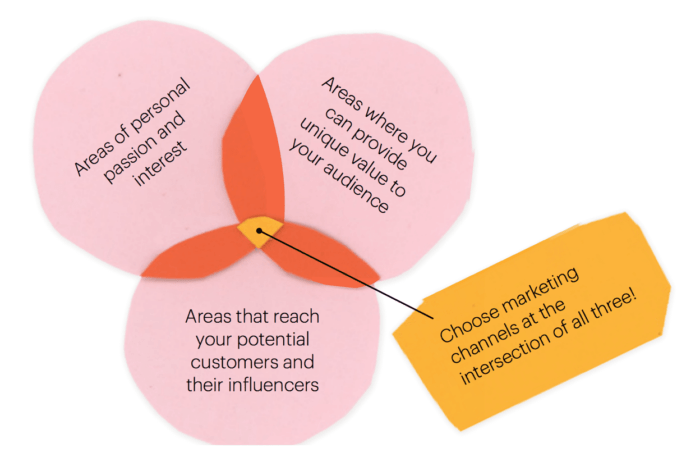 Once you have this core audience, pitching them becomes a whole lot easier. If you read an Intercom blog post or met me at a conference around 2011-12, you probably received an email from me at some point.

I didn’t send one size fits all emails asking people to give us their credit card details. I’d always remind the recipient of how we met and explain why I was emailing them, and then I’d mock up a screenshot of how Intercom would look if they started using it and tailor the message to their use case. If they were a product manager it would be about helping customers to use a feature more. If they were the CEO it would be about helping to activate customers who were slipping away.

Sending thousands of these personal emails was a grind, but the process was like a petri dish for our early marketing. When you start with an addressable and responsive audience, you get a pretty immediate feedback loop. If people respond with “Piss off. Don’t ever contact me again,” this tells you that you need to refine your message. A lot of startups spend untold time and resources cooking up some fancy marketing matrix when in fact you just need to have lots of real life conversations with like-minded people about their problems, and mutually explore how you can solve them. If your product is in the vicinity of a real person’s real problem and you have a pitch that resonates, you can’t go too wrong.

In the early days, you’re usually just happy to have anyone talking about you. We were very lucky that a lot of our marketing – the content we’d published and the talks we’d given – helped us get significant attention among our target audience.

But attention doesn’t pay the bills. Even getting to the top of Product Hunt and being tweeted about by the hottest VCs count for little in the long run of building a business. You might do enough to capture some of the early adopters but then the Law of Shitty Clickthroughs comes along and the effectiveness of this early attention grinds to a halt.

The point here is that no matter how successful your early tactics are, you can’t rely on them forever. Channels will become saturated, copycat competitors will emerge and consolidated winner takes all platforms will look to kill you before you’re out of the gate. You need to constantly be working on marketing tactics that are actually getting people to buy your product. If you’re planning to be around for the long term instead of an overnight sensation lighting up TechCrunch for a week, you will eventually need to reach a fatter part of the market, and that requires a whole different set of channels – from PR to paid acquisition to SEO – to survive.

Our book, Intercom on Marketing, has many more of the lessons that helped us grow from zero customers to more than 20,000. See our advice for startups on developing messaging, getting word of mouth, keeping teams aligned, and more