“We wanted flying cars, instead we got 140 characters.”
– Peter Thiel

People in tech commonly overestimate the impact of big things and underestimate the power of small things. We constantly talk about the next big thing that will change everything, the next revolution that will inevitably happen. In the past few years it has been AI, chatbots, VR, blockchain and whatnot. Yet, those big things almost never seem to really take off. They always seem like a disappointment.

The flying car is perhaps the most telling example of the next big thing. It’s an image of the future that we first get exposed to when we were kids watching sci-fi. It’s a mirage that we walk towards in our dreams our whole life, yet never actually manage to reach. As Thiel’s famous quote suggests, the absence of flying cars is a constant reminder that the true future is not here.

In the past, chatbots were the future

I recently had my own moment of reckoning with how reality and our visions of the future can collide.

I designed my first chatbot in 2015. It was for a large UK bank that wanted to get a sneak peek into the future of the conversational UI. At the time a lot of people in the tech industry thought that chatbots coupled with AI were the future of UI. They were meant to be the new websites. They were meant to kill 99% of the apps. There couldn’t have been more hype, and I was fully expecting the hype to bear fruit. 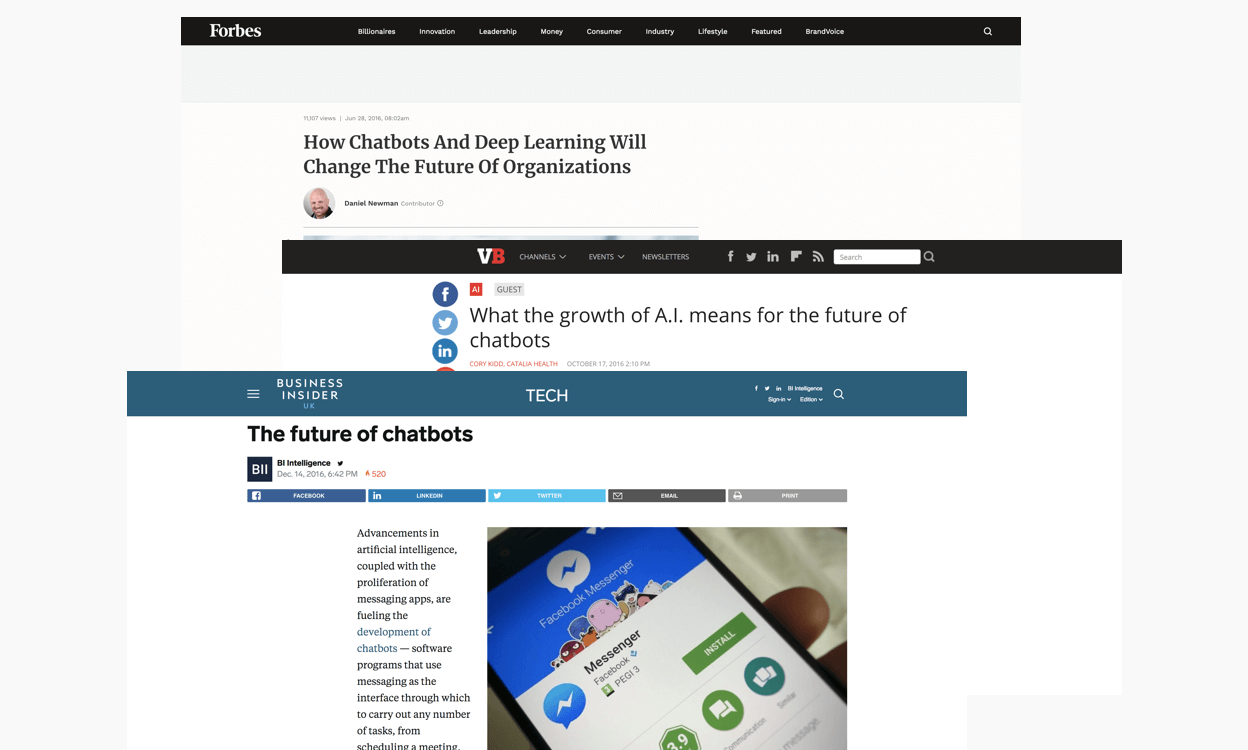 Fast forward to 2018 and it seems like the conversational revolution didn’t happen after all. Conversational UIs haven’t replaced websites or killed apps. Most chatbots out there are not even distantly intelligent. Facebook has shut down Facebook M. What happened to the chatbot revolution? Was it just another mirage?

Well, maybe, but perhaps we were just looking at chatbots in the wrong way.

We recently released Custom Bots powered by Operator. It’s a simple to use but powerful tool that enables anyone to automate conversations with their website visitors. They are not HAL 9000 style chatbots that can mimic human intelligence. It’s not the next big thing that I was dreaming of in 2015. But I’ve never been more excited about the future of chatbots and automation than I am now. Why? I have realized two things.

The future is not binary. It doesn’t have a clear on or off state. You can never say “this is the moment when the future happened”. It might seem that it happened overnight in retrospect, but it’s not how it works in reality.

For one example illustrating this, let’s look at the Apple Macintosh. It’s difficult to argue that it wasn’t a revolutionary product. It changed the way people think about personal computers. Macintosh was the first computer to introduce the GUI desktop metaphor to the mass market. It set a very high bar for the quality of human-computer interaction. The Mac was a stepping stone that later enabled Apple to follow up with the iPod and iPhone.

At the time of the release, though, the Macintosh was perceived more as a nice expensive toy. It’s graphic UI was a clear leap forward compared to command line interfaces that most consumers were using at the time. But it wasn’t exactly obvious that the Mac would define the future of human-computer interaction.

William Gibson once famously said: “The future is already here – it’s just not evenly distributed.” It’s worth adding that the even distribution of the future takes a lot of time. It’s a constant work in progress. It’s always happening.

The next big thing is actually not big

The entire history of the computer revolution shows this in action. Who started it? What’s the specific piece of technology that caused it? The truth is that there were many fascinating people involved that each contributed something to it.

Ada Lovelace and Charles Babbage created the first concept of analytical machine and the first programming language. Alan Turing later came up with the idea of a universal computer. George Stibitz built the first electric calculator. Grace Hopper created the first computer compiler. Douglas Engelbart and Bill English invented the mouse. Ray Tomlinson created email. Alan Kay and Xerox PARC team created the Alto. Richard Stallman created the first free operating system, GNU. Tim Berners-Lee and his team at CERN created the world wide web. And so on and so on. There are countless other people who contributed to the computer revolution too.

The point is clear. Lots of small innovations compounded over decades have resulted in what we call a computer revolution.

Custom Bots are a small step in a big direction

Which brings us back to Operator, Custom Bots and what a chatbot revolution might actually look like. A tool that enables anyone to build their own bots might seem cool, but maybe not a big deal on its own. It’s definitely not how I thought the chatbot revolution would happen in 2015. But compound it with the Intercom Messenger and apps built on the Intercom platform, and it suddenly becomes a powerful thing. A thing that can enable many other things.