The final episode of our four-part podcast series exploring our "new normal" - with life lived entirely in the home.

“Home is where the heart is,” as the saying goes. And for now, it’s where you’ll find the office and school and the shops and concerts, too. H.O.M.E. is a special four-part series on Inside Intercom that explores how people across many industries and countries are managing to persevere with the help of technology.

When it’s all said and done, we’ll have covered the following themes:

Last week, we took a look at the scramble to move brick-and-mortar retail online. This week, our final episode checks in with how folks are keeping entertained when they can’t leave the house.

Drawing a bright line between work and play has become a tricky thing to navigate for those of us who are working and living in the same space. But separating the two is more important than ever in the absence of physical boundaries.

From streaming your favorite TV shows to digging into a good book, there are myriad recreational opportunities – especially since there’s more time with no commute. But what about the people producing that entertainment? How has the crisis impacted the way these creators keep us amused? This episode feature conversations with:

If you enjoy the conversation, check out more episodes of our podcast. You can subscribe on iTunes, stream on Spotify, or grab the RSS feed in your player of choice. We’ve also put together a companion guide to the episode, which you can read below.

While many are virtually snuggling up and co-watching their favorite shows or turning to comedy to get through anxious times, others are scuba diving in a sea of ink on printed pages.

Mark O’Connell, a non-fiction writer based in Dublin, has the distinctive experience of debuting his second book in the middle of an outbreak that has kept him from traveling to promote it. That book, fittingly called Notes From an Apocalypse, explores the anxious subculture of people preparing for societal collapse from South Dakota to New Zealand.

He traveled widely for his first book (To Be a Machine, which investigated the idea that technology will provide a means of immortality), from half-empty church halls in Scotland to idyllic Italian villages in Emilia-Romagna. But that kind of physical promotion simply wasn’t an option this time around. “The launch was, in very obvious ways, quite anticlimactic,” Mark admits. “At the end of writing a book, all things being equal, you go out into the world, and you have a launch, and you meet people, and you hopefully meet people who’ve read your book. It has happened, but it’s happened all virtually through my spare room.” 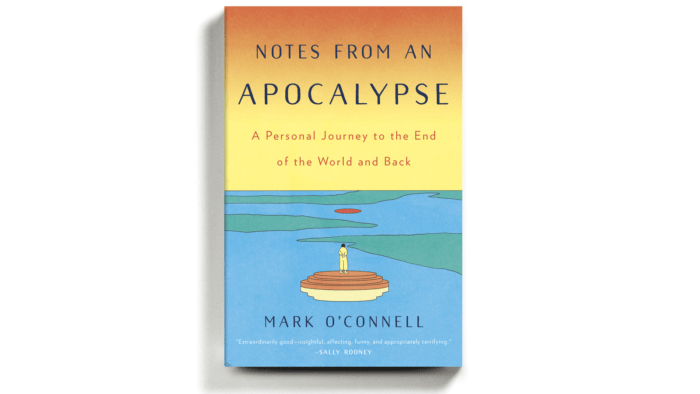 Until a new book picks up steam, the early days of the promotional circuit can be a slightly hollow experience for a writer who’s trying to drum up enthusiasm for his work. And it’s hard to measure whether those efforts are worth the investment. The experience has led Mark to question whether that amount of travel – and its impact on the environment – is really necessary?

“This book begins out of my own anxiety about climate change. And at the same time, I had this quite daunting travel schedule for the summer, which involved going to Australia and New Zealand and the US and really racking up the air miles and pumping out the carbon.”

For a writer like Mark, who relies on physically being there to capture scenes and textures and personalities, this involuntary travel restriction may well inform his future work. Armed with the knowledge that books can be sold from afar, he wonders if he might keep his travel limited to what’s necessary for the reporting. “Everything has been turned on its head and people are still in the process of assessing what’s important and what’s not.”

In 2018, Intercom’s own Principal Engineer Eoin Nolan found himself in a long-distance relationship when his girlfriend moved to Argentina for a year. As anyone who’s dated across continents knows, there are precious few ways to bridge the distance.

Back in Ireland, the couple enjoyed watching movies and TV shows together. “One of the things I think is quite important when someone’s on the other side of the world, and you’re trying to stay close, is to keep a sense of normality in your day-to-day relationship,” Eoin says. So he created Vemos, a Chrome plugin that allowed them to watch their motion picture of choice in sync and – setting it apart from other co-watching apps like Netflix party – video chat at the same time. That feature turned out to be especially prescient, because it allows viewers to partially replicate the same experience of being in the same room together, able to see each other’s facial expressions or hear wry side comments that wouldn’t warrant their own dedicated chat message.

When they reunited, Eoin shelved the project. But a couple of months ago, he had a good reason to dust off the app. “Fast forward to 2020: it’s not just me doing a long-distance thing, but it seems to be literally everyone on the planet,” he explains. He updated the functionality to support all the popular streaming services including Netflix, Hulu, Disney+, Amazon Prime and more and is now seeing more than 10,000 regular users.

“This is a thing that I genuinely think will bring a lot of happiness to people during this really crappy time,” Eoin says. Now that we’re all in long-distance relationships of one sort or another – even if friends and loved ones are just down the street – it’s his way of reducing that space between us and offering a little joy in the process.

A second life for The Second City

Improv and sketch comedy are two in-person experiences that have likewise been lost to the pandemic. That’s why The Second City – the collective that launched the careers of John Candy, Tina Fey, Amy Poehler, Bill Murray and almost every other recognizable comic – has moved from the stage to the small screen in the wake of Covid-19.

Founded in 1959, the organization has long worshipped the physical connection that occurs when actors and audience are in the same room creating comedy together. “We’ve offered up videos and [online classes], but we were always like, ‘Oh, it’s not the same as coming to the theater, sitting there for two hours and then feeling this special magic that’s happening in front of you,'” explains Anthony LeBlanc, Artistic Director at Second City in Chicago.

But with locations in Los Angeles and Toronto, Second City’s audience and students had already begun to spread across the continent, not to mention folks in smaller towns who may not have had the ability to get to one of the bigger markets. If a slow creep toward a stronger digital presence was already underway, the current health crisis jammed the gas pedal to the floor.

The move online hasn’t been without its challenges. “The big thing for us has been how we keep the interactivity,” Anthony says. “We still want to have that feeling that, when you come to it, this is something that is just for you, and in theory, you can’t see if you missed it.”

In its live shows, Second City is known for engaging audience members, whether by inviting suggestions from them directly or even bringing them up on stage. Instead of broadcasting its shows on static video platforms like YouTube, the theatre has been using Zoom for an added layer of interactivity. “We’ve found that we’re able to have people in the space who we can instantly put into the show, do something with them, and then put them back into the audience, because they can exist inside of it,” Anthony says. It has also required them to Frankenstein their tech on the backend, using a mix of elbow-grease programming and tools like QLab, a sound, video and lighting app for MacOS that, with the assistance of AppleScript, allows the A/V team to bring a similar level of live magic to Zoom.

“It translates just as well on this digital platform, because you’re still connecting with people. You’re still seeing those people on the screen. You’re still doing things with them.”

But for all the challenges, the forced move online has brought some welcome benefits, too. “We do a lot of health and wellness stuff, so a large part of our mission is seeing how improv and comedy affects things of that nature,” Anthony says of Second City’s work with aspiring comics who may be on the spectrum or experience anxiety. “It translates just as well on this digital platform, because you’re still connecting with people. You’re still seeing those people on the screen. You’re still doing things with them. But this is happening in the comfort of your own home, and it doesn’t involve having to travel or pay for that travel.”

If there are silver linings to this fretful moment, greater accessibility is perhaps one of the shiniest. Entertaining audiences and giving them a break from worrisome news is certainly a worthwhile mission. But empowering people to dig deep within themselves and find their voice? That’s the definition of a noble endeavor.

Original artwork for this series was created by Natalie Nelson. Natalie is an illustrator, picture book maker, and collage artist. You can find out more about her work here.