Prior to the “discovery” of the New World, European maps were shrouded in fog and lore. If cartographers didn’t know what lay past the known world, they’d simply draw sea monsters, phantom islands or even dragons. Every century, explorers would fill in a few more blanks.

What does this have to do with marketing? Well, in this day and age, the world of marketing can also seem similarly mysterious, except that new tactics and spaces are emerging every year instead of every 100. If it’s not Facebook modifying its Newsfeed algorithm, it’s Google shaking up AdWords and DoubleClick – requiring marketers to constantly redraft once tried-and-true roadmaps.

How do you keep up with such breakneck development? By building a nimble, swashbuckling team that relishes tackling new challenges on the high seas of marketing.

“There’s sort of this consolidation of the way that we find information online to really two, three major giants: Amazon, Facebook, Google. That’s not inherently bad, but that does change a lot about the way that we operate”

Meghan Keaney Anderson has been doing just that at HubSpot for the past 8 years, which feels like a lifetime in the world of startups. During the course of her time there, she’s seen HubSpot grow from a small, plucky startup into a billion dollar household name.

Now HubSpot’s VP of Marketing, Meghan is also the accomplished host of The Growth Show, which unpacks the stories behind inspiring products, businesses and movements.

Naturally, we thought it was high time we had a chance to hear her on the other side of the microphone. We specifically wanted to pick her brain all about customer acquisition: just how does HubSpot do it, and what marketing tactics do they deploy?

You can listen to the full conversation above that Meghan had with our Director of Content John Collins, or catch Meghan’s key takeaways below.

This is episode nine of Scale, a brand new podcast series on moving from startup to scale up. If you enjoy the conversation and don’t want to miss the rest of the series, just hit subscribe on iTunes, stream on Spotify, Stitcher, or grab the RSS feed in your player of choice.

The promise of the grand internet meritocracy

Not so long ago, the World Wide Web was pioneer land. To start a successful business and get customers, all you really needed was a good idea and an internet connection. But over the past couple of decades, that free-for-all has consolidated into a landscape that is largely controlled by the Big Three: Amazon, Google, Facebook. 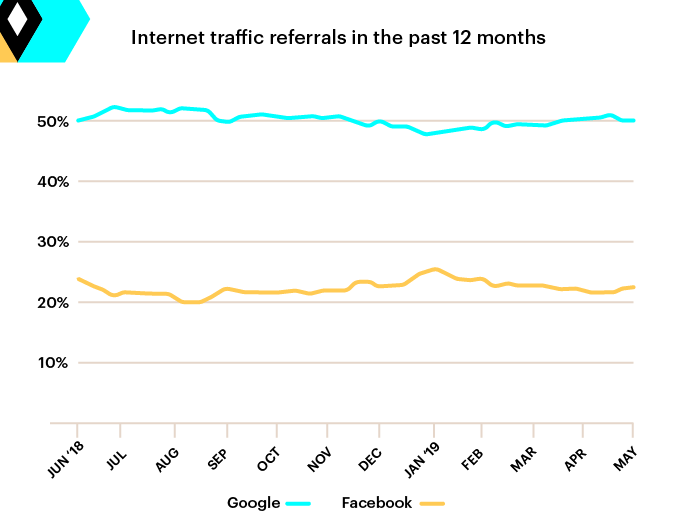 Collectively, Facebook and Google are responsible for close to 70% of traffic sent to websites. Source: Parse.ly

In her post “What Happened to the Internet?” last summer, Meghan breaks it down: “Amazon owns e-commerce. Google owns information. Facebook owns the social graph and all communications tied to it.” We’ve gone from the enthusiastic disruption of traditional gatekeepers (like newspapers, radio and broadcast television) to falling into line behind less than a handful of new tech giants.

The numbers behind this u-turn are staggering. Amazon collected 42% of all purchases made online in 2017. Facebook and Google commanded 60% of the world’s advertising dollars. And Facebook alone saw more monthly active users than were even online less than 10 years ago.

“Noting that change, we should be thinking very differently about how we’re going to market”

To Meghan, this represents a tectonic shift in the way we market online:

“When the internet first came about, the promise was that it was this grand meritocracy, and anyone with a good idea could get found online for free, and that birthed inbound marketing.

“Over time, consumers got a little bit overwhelmed by all of those options and all of that content and so the web actually started to consolidate a little bit and aggregate information more and be more of a filter to that information than it had previously been.

“What’s happening is there’s sort of this consolidation of the way that we find information online to really two, three major giants: Amazon, Facebook, Google. That’s not inherently bad, but that does change a lot about the way that we operate and it also has ramifications for the way our societies work and the way that our businesses work. So noting that change, we should be thinking very differently about how we’re going to market.”

Marketing in the world of the changing algorithms

With the power solidly in the hands of the Big Three, any tweaks they make to their algorithms ripple through the entire digital ecosystem, sending big and small companies alike scurrying to keep up. The choices these monoliths make become the only choices, which means we all have to adapt alongside their individual evolutions.

Savvy marketers must maintain a close watch on changing traffic patterns and be aware that even small alterations have the potential to disrupt once reliable sources — like when Facebook modified its Newsfeed last year, causing its organic ranking algorithm to prioritize users instead of publishers. 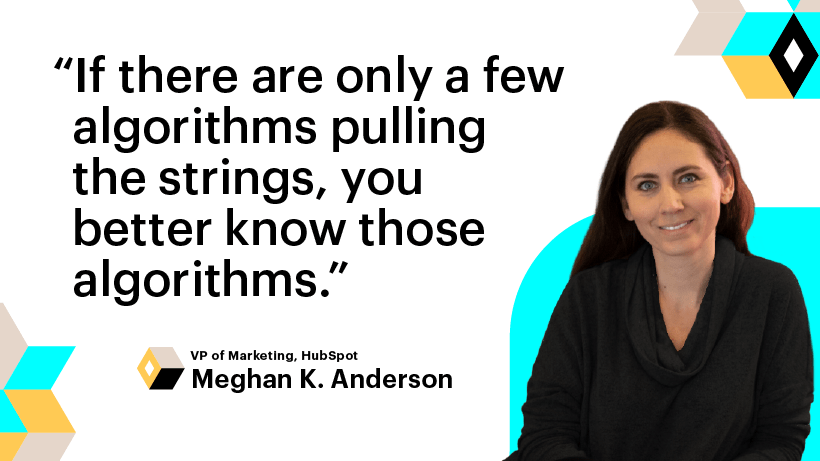 These changes mean marketers need to constantly rethink how they bring in new customers. One of the biggest shifts that Meghan has made is to the way her team is organized. Instead of keeping the content marketing team as one, her response has been to split their efforts in two. One arm works on creating the kind of stories that find readers (often virally via social networks). The other focuses on publishing the kind of stories readers search to find and making sure they rank highly on Google, in close collaboration with the SEO team. In a world where it has become difficult to rank on any topic, they’ve found it’s essential to align at the beginning of the process, not the end.

Meghan explains that this is all part of their response to an ever-changing landscape:

“The click throughs are gone. They’re not coming back and there are great companies like Buffer that have done a ton of research on this where they’re seeing social really fall off as a referral source, but engagement on social is not falling off, in fact it’s rising. So the shift in strategy then has to be okay, how do you drive engagement within those platforms and how do you grow an audience within those platforms and then once you have that audience, what do you actually do with it?”

Your best marketer is your customer

Here are some facts about referrals that may surprise you: Nielsen found that 92% of people trust product recommendations from friends, and those prospective customers are four times more likely to buy than customers who haven’t been nudged by an acquaintance. 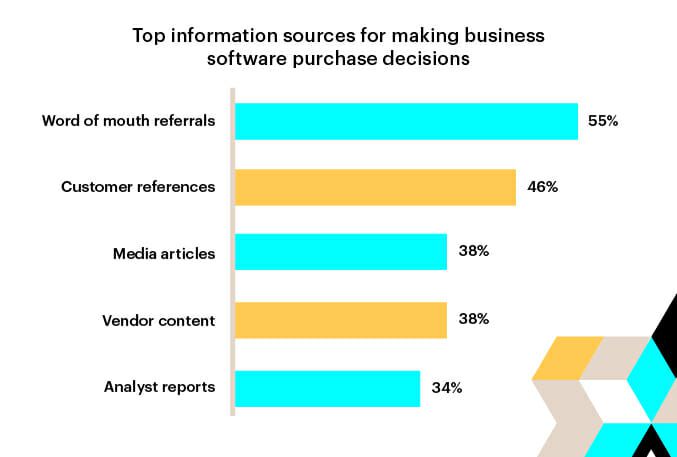 And yet, bafflingly, 66% of companies aren’t asking their willing(!) customers to spread the word about them – even though word of mouth can generate twice the amount of sales as paid advertising. That’s a wasted opportunity.

HubSpot is in the enlightened 33% that understands the power of referrals. But it hasn’t always been this way. Three years ago, Meghan would have pointed to the HubSpot blog, academy or sales team as the primary ways that people first discover HubSpot. With the advent of word of mouth marketing, she along with the HubSpot leadership team is steering the company to do things differently. For instance, the team launched The HubSpot Customer Code last summer, a set of principles for how the company plans to stay perpetually focused on their customer’s success. 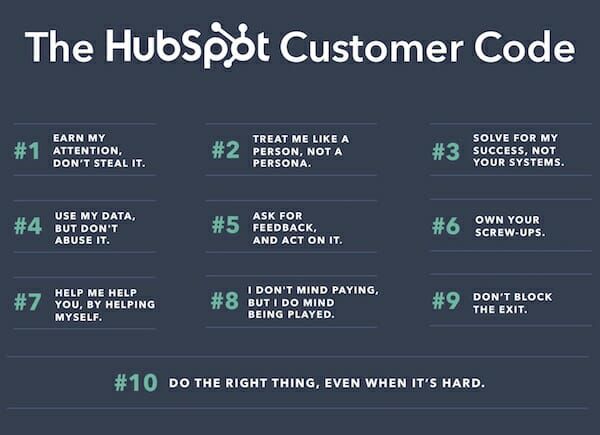 Within marketing, Meghan encourages her team to stay hyper-focused on the customer through a combination of goal-setting and organizational setup.

For other marketers looking to shift their strategy, Meghan advises:

“There are a lot of things that you can do as a marketer to try to drive word of mouth. The first obvious thing is just create a really good end-to-end customer experience, remove all the friction, make sure that it’s not just that your product is good, but your buying experience is good and that people enjoy it.

“It’s worth identifying who are the people that are most successful on your product or service and are the happiest and trying to empower them to write reviews, to share, incentivize them in one way or another to talk about their good experience.” 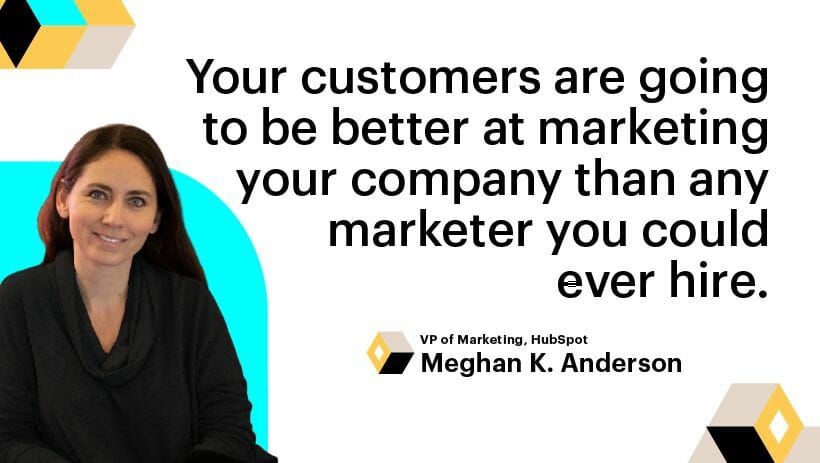 Spotify recently acquired Gimlet and Anchor (two podcasting startups) for a combined $340 million. Google has shaken up the SEO game in recent years by increasing its reliance on featured snippets, which pushes ads and previously top-ranked search results even farther down the page. And cost-per-acquisition itself is up 50% over the past five years. 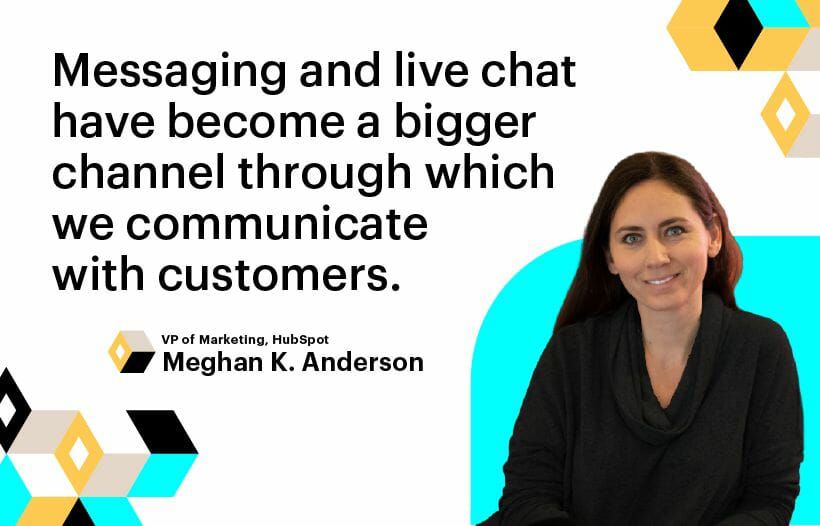 All this to say: the topography of customer acquisition is experiencing a full-blown earthquake. That’s why today’s marketers must be sure-footed on shaky ground by staying on top of the latest channels.

One area that Meghan is experimenting with is messaging and live chat because of its immediate and direct connection with customers. Her team’s been able to figure out a way to drive conversions directly via Facebook Messenger without requiring users to leave the app. What’s more, these conversions are at a fraction of the cost for other conversions and at the same quality as other lead sources. 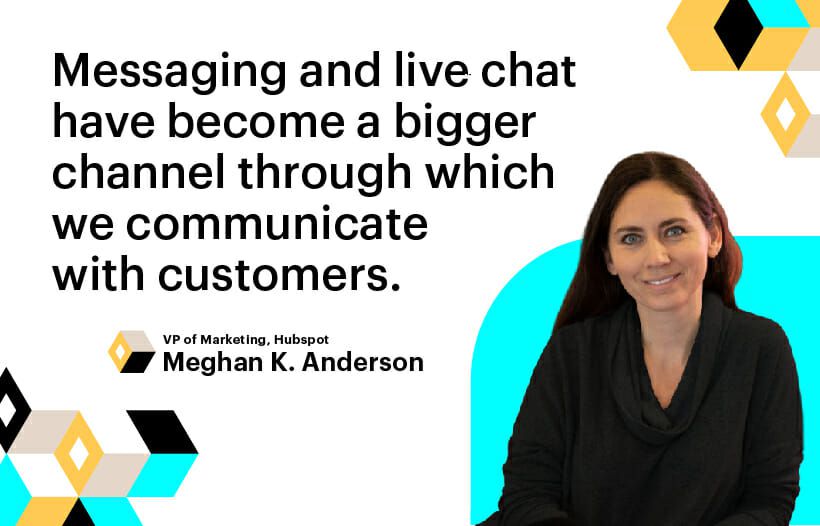 You can be sure that Meghan’s team is hard at work testing new ways to acquire customers through other nascent channels like podcasts and YouTube. Any marketer aspiring to build the next HubSpot would be smart to follow in her team’s footsteps.