When you think about runaway business models – the kinds MBA students study in class as they dream up the next big winner – it’s tempting to reduce their success to a few simple factors.

These companies obviously have an amazing product. They’ve got a great way of telling that product’s story to the world. And they’re really, really good at selling.

But those three things are what got Starbucks its first profitable coffee shop in Seattle, not what allowed that shop to morph into an $80 billion business with 30,000 cafes around the world. That kind of growth? It requires thinking at a different scale.

As the team at the SaaS commerce platform Paddle has learned, real growth is about entering new markets, and that takes thoughtful attention to pricing, making inroads into new geographic regions, deciding whether to move upmarket (or downmarket), and offering new standalone products instead of bloated features tacked on to old ones.

It’s this approach to scaling their business that has enabled Paddle to achieve 2,475% revenue growth over the last four years. It’s even garnered them an enviable position among Deloitte’s Fast50, a list of the fastest growing software companies in the UK.

We sat down with Paddle’s Ed Fry for an in-depth look at what it really takes to scale at such a breakneck pace. As the Head of Growth, Ed’s mission is straightforward if far from simple – taking the company’s already skyrocketing growth and accelerating it.

Listen to the full episode above or check out our main takeaways below.

This is Season Two of Scale, Intercom’s podcast series on moving from startup to scale-up. If you enjoy the conversation and don’t want to miss the rest of the series, just hit subscribe on iTunes, stream on Spotify, listen on Stitcher, or grab the RSS feed in your player of choice.

1. Product, marketing, and sales are table stakes for growth

When it comes to growth, it’s tempting to boil the recipe down to just a few ingredients. We see wildly successful companies and attribute their success to a combination of their product, the story they tell about it, and their ability to monetize it.

Take Slack, for example: the media points to its brilliant product as the reason for its impressive growth. Hubspot? A genius inbound marketing strategy. Salesforce? It’s in the name: a company inspired by the needs of salespeople has to be good at selling itself.

In reality, a killer product, a great story, and sales talent are just the bare essentials – the cost of entry into the world of business. To unlock real gangbuster growth, you have to think about expanding your market, not just capturing more of an existing one. 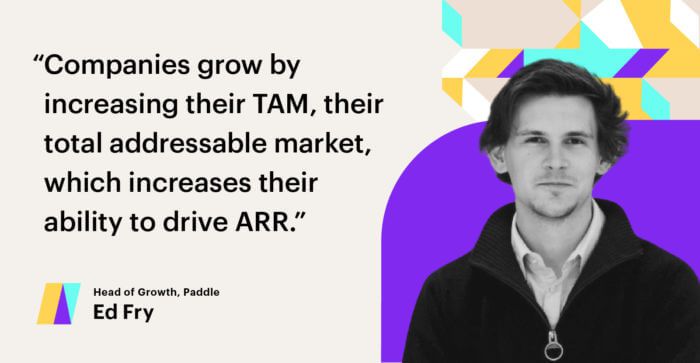 “The reality is fast growing companies have all this stuff – they have marketers doing marketing, they have product people. But that’s not why they grow. The reason why they grow is they’re in a great market. Software businesses are just like any other business, like Starbucks, Pret A Manger, McDonald’s. They grow because they are in more markets. They are in more locations, they’re selling at more price points, they’re selling more products. And for software businesses, it’s exactly the same.

“In that process, the whole sales, marketing, products, go-to-market, commercial model is going to change. And, really, growth comes from figuring out that product-market fit, that go-to-market fit within each of those markets.”

2. Invest in the five stars for growing your market

Most businesses talk about the idea of a North Star. Sometimes it’s a guiding philosophy that the company’s leaders rally everyone around. Other times it’s a metric that a specific team orients their work toward achieving.

In Paddle’s case, they optimize for the five stars of growth:

Companies like Slack, HubSpot, and Shopify have all operated on this deeper level, leveraging these five strategies to go public. As Ed points out, it’s right there in their company reports:

“If you go and look at public SaaS companies, you go down to their S-1 and investor filings and Q1 reports, you see how they’ve outlined their growth strategy. And we dig through this and we dig through our own sellers’. And really there are five most common market-moving strategies. This really sets the context for how companies grow.

How you prioritize each of the five stars depends on your organizational model and whether it’s product- or sales-led. Though both focus on monetization first, product-led companies tackle internationalization – that is, building a product for a global audience – before moving upmarket. Sales-led companies, on the other hand, flip the script. Whichever path you decide to take, it’s essential to put a comprehensive strategy in place.

3. Optimize for being international from day one

Growing companies often see international expansion as a huge endeavor, requiring years of careful planning. Unsurprisingly, the thought of having to rethink all your customer touchpoints tends to inspire trepidation, not excitement.

But as Ed points out, even small optimizations for global customers can have outsized results, especially in software where the barriers to entry are low. It’s especially helpful if international aspirations are baked into the strategy from the very beginning:

“Most companies, particularly companies isolated, say, in the US market, are missing out on optimizing for half their signups, half their customer flow. And at the scale stage where 100% year-on-year growth actually turns into quite a substantial dollar amount, making small incremental improvements can make dramatic increases in top line revenue. That’s something which we’ve seen repeatedly again and again, particularly for product-led SaaS, product-led software companies where anyone all over the world can sign up. You’re international from day one.

“For scale-ups who aren’t thinking about international beyond ‘Oh, that means we have to set up an office or translate to our entire product,’ it’s like, ‘No, there are way earlier, way simpler optimizations that people can make.’ We see a pretty consistent lift there, sort of 30% globally on revenues. In some markets like Germany, we’ve seen sellers triple their conversion rates just by getting things like payment methods right.”

These kinds of optimizations are only the first step into a vast world. An ongoing commitment to internationalization, one of Paddle’s five stars, can lead to huge results. In a recent study of SaaS companies, Paddle found that 40% of those who expanded internationally reported having new, scalable sources of growth among other benefits. 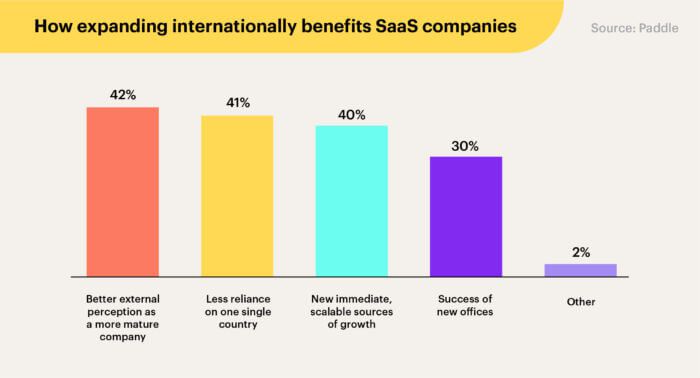 4. Build your own universe of market opportunities

Last season, Stripe’s Jeanne DeWitt shared how the payment-processing company developed “the universe” –  a giant database of companies they could target through outbound sales. Ed and his team at Paddle have taken this idea and made it their own.

In their case, Paddle are using data to determine which geographies they’ll target next. Analyzing data from their own sellers along with external data, Paddle’s “software universe” enables them to identify which markets are ripe for expansion and assess what factors will lead to success in those regions:

“We started building our own universe and we call it ‘the software universe.’ So this becomes a collection of data sources to understand different things about software companies. Who do they sell to? Is it a free trial? Is it sales-assisted? Where’s their traffic across the world? What tools are they using? And then how can we run machine learning and AI and all kinds of predictions on top of this to understand who we should be talking to?”

So, where did their “software universe” lead them? Directly to Asia and the Middle East. While most companies establish themselves in North America and Europe before expanding into these regions, Paddle’s data took them down a different path.

“Going East is definitely the area of focus in the future. I think very few companies, particularly US companies, understand the East on this. It’s quite a distributed software landscape because salaries in many of these countries aren’t as high. It doesn’t tend to support enterprise software, but product-led companies can do really, really well there.

We have a number of sellers from places like Armenia or India or Malaysia who are performing really, really well. They are GT 100 companies. They out-compete their Western competitors. They’re growing much faster. And this is for us one of the biggest growth areas.”

By looking beyond the horizon of established markets, companies can slingshot into a new frontier of growth. The International Monetary Fund projects global GDP growth to pick up in 2020, largely due to anticipated upturn in emerging market economies such as those in the Middle East. 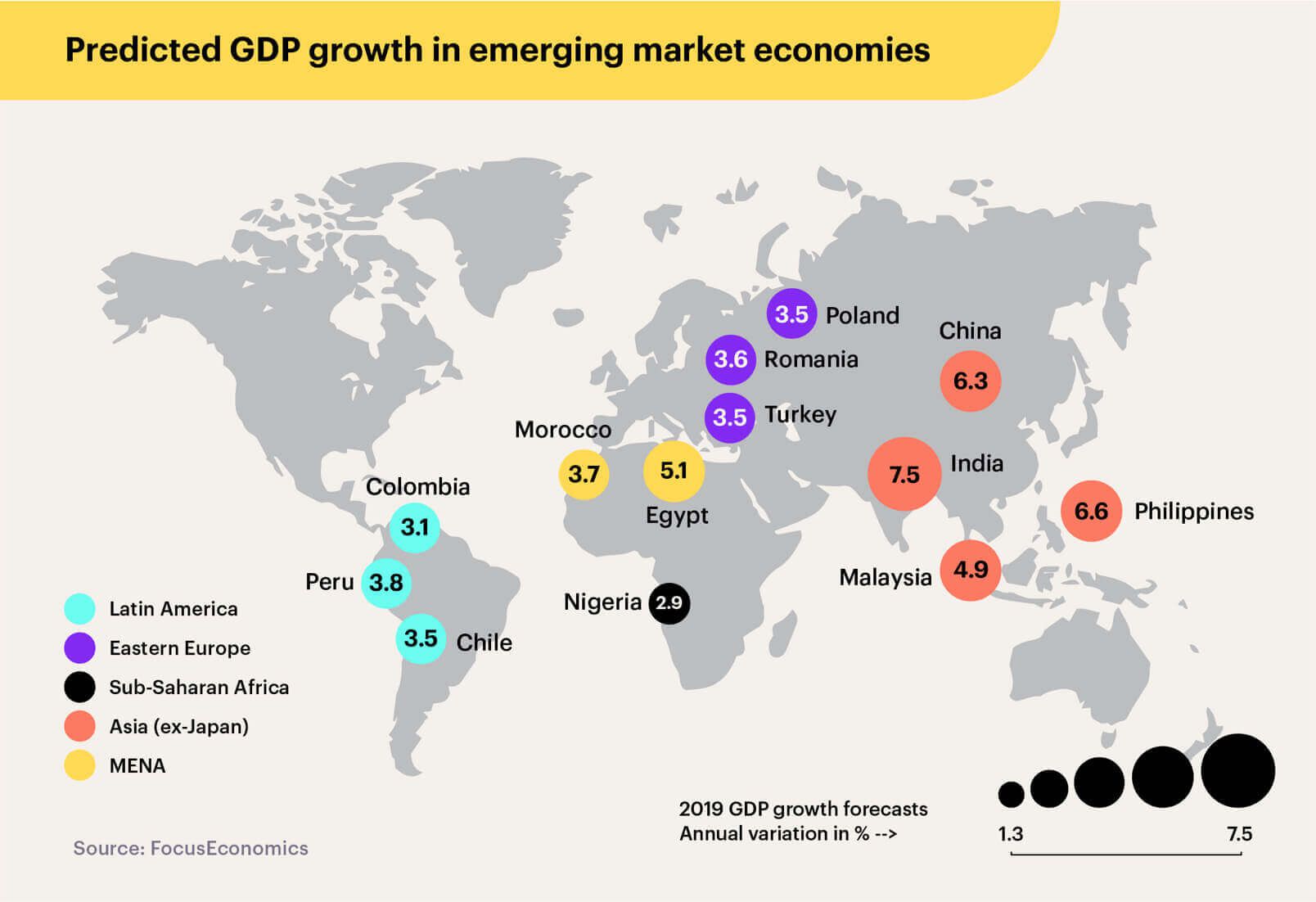 It should be clear by now that a truly effective growth strategy spans a number of initiatives. Paddle’s Five Star Framework dispatches with the notion that a company can get by on its product, marketing, or sales alone in a way that will produce massive, meaningful growth.

But with five different strategies all competing for attention, each hand must know what the other is doing – or risk misalignment. It’s a danger that can quickly send your company careening off track. Just as companies scale, so does misalignment.

That’s why it’s crucial everyone in the company thinks about growth from a single, shared point of view – that of the customer. As Ed points out, growth requires collaboration, not kingdoms:

“The challenge across all this market moving stuff is it’s not functional. Like I said earlier, it’s not me and marketing sitting and explaining my view of the world or sales doing that in their silo, or product in their own kingdom. This is truly cross-functional stuff.

“For the companies which fail to do that, it shows. Your products, it seems out of touch. Your messaging is off. It doesn’t quite hit the mark. Again, that aggregation of customer insights, given in modern companies, people come through products, they come through a website, they talk to a rep, it’s all cross-functional as well. It’s flattening the entire organization around the customer.”

We found that the terminology in our codebase reinforced the biases and systemic racism we set out to take a stand against. So we found a way forward to eliminate their use at Intercom in hopes to create an inclusive environment for all.

With over 72,000 downloads in its first week on the market, contact tracing app Rippl has been a lifeline for New Zealand businesses during COVID-19.

In the latest Inside Intercom episode Jordan chats to Stack Overflow’s CEO about how community is at the very heart of what they do, how they balance this with the needs of the product and why he believes they are helping to write the script of the future.