Most SaaS companies start with a free offering – providing a preview of their product’s capabilities before converting their users to a paid plan. Vidyard did the opposite.

Instead of capturing small businesses and then trying to upgrade them to paid plans, the video hosting and analysis startup attracted larger companies, then worked backwards.

Initially, that meant focusing on organizations with more than 200 employees. But in the second phase of Vidyard’s playbook, the company launched a free version. Their philosophy? If the product meaningfully improves people’s day-to-day lives in the short term, major dividends will follow later.

The results have been staggering. In just a year, Vidyard saw 20,000 organizations join their platform after being introduced to the product for free by partners like HubSpot and Adobe. Many of Vidyard’s free users saw a need for greater functionality and decided to become paying customers.

Vidyard co-founder and CEO Michael Litt chatted to Intercom’s EMEA Sales Manager Ciaran Nolan about how Vidyard flipped the freemium model on its head, why moving downmarket might be the answer to accelerated growth, and how to build a multi-million dollar business unit – overnight.

Listen to the full episode above or check out Michael’s takeaways below.

This is Season Two of Scale, Intercom’s podcast series on moving from startup to scale-up. If you enjoy the conversation and don’t want to miss the rest of the series, just hit subscribe on iTunes, stream on Spotify, Stitcher, or grab the RSS feed in your player of choice.

Flipping the freemium model on its head

Vidyard initially built and marketed themselves as an enterprise-focused company. In the early days, Michael and his co-founder, Devon Galloway, called on organizations that had a problem they believed their product – designed to be the fastest and easiest way to put a video on the internet – could solve.

Over time, they added content and brought on partners but kept the 200-employee minimum in place – until a proactive sales development rep approached them with an idea. The company had previously been turning down small businesses, but the sales rep recognized that these prospective clients could get real value out of the software, so he proposed a plan to sell them a custom solution.

“In the first month he sold about $150,000 worth of software. So we thought, okay, there’s obviously something here in this lower-downmarket. In parallel with that, HubSpot decided to OEM our product into their landscape of products. If you use SalesHub, MarketingHub, or ServiceHub today, they have video functionality that’s powered by us.”

Michael calls this strategy “reverse freemium.” It can feel incredibly risky to begin giving away a product or service that you’ve been successfully charging for. But even though it might seem counterintuitive, Vidyard have found the choice to be a huge growth driver that has opened up an even larger market share, directly increasing the impact of the company’s mission – to make video creation, hosting, and management more accessible to businesses of all sizes.

“In martech, there are 7,000 companies competing for the marketing budget, and there’s only so much budget available. So, how do you stand out when every one of those companies is trying to say the same thing to the CMO, enterprise, or small business? You do that by removing the barrier to entry and allowing people to use the product for free, get value out of it, and then if they need the advanced functionality – buy that functionality.”

“It started as being a way of serving smaller businesses, but then became a really effective way of working with enterprises. That meant a complete overhaul of the way we thought about building products, the tiering of our product and engineering teams, our go to market strategy, how sales respond to these users, and how we help hundreds of thousands (if not millions) of free users achieve success.”

The power of reciprocity – unlocking value for users accelerates growth

With this new approach, Vidyard is playing the long game: operating with the philosophy that improving their customers’ day-to-day lives with a free and easy video service in the short term will generate goodwill and customer loyalty that will sprout into dollars later. But it isn’t about giving away the farm. By ensuring users are getting true value from your product, you actually increase customer acquisition. 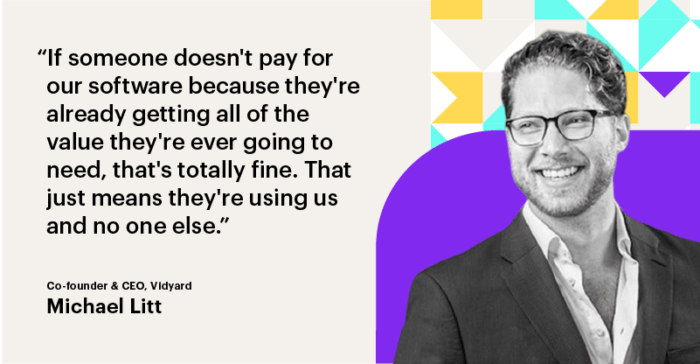 It’s an effective strategy for monopolizing and increasing market share. Research supports this view. In a recent piece for Inc. Trepoint CEO Bill Carmody extols the virtues of offering value first, pointing to offerings like Gmail and the Android operating system as prime examples of products Google has “given away” on their journey to their now $926 billion market cap.

Asking the question, “How can I help?” is the key to growth, says Carmody, and it sounds like Vidyard have been listening.

“If someone doesn’t pay for our software because they’re getting value out of it and it’s all the value they’re ever going to need, that’s totally fine, because that means they’re using us and no one else. And who knows if that person goes into a company in the future that has bigger needs and is aware of what we do and then becomes a customer downstream.”

“One of the things that we decided to do was to make MAUs (monthly active users) a KPI that the whole business cared about. Not only that, but an MAU has to have a bunch of criteria that makes it difficult to become. For a lot of companies, an MAU is someone who has installed the software or signed into the software. We say that users have to install it, sign into it, create or upload a video, and then have that video viewed by someone. This means they’re getting the full extent of value that we provide. The goal is to show MAUs the features and functionality that can potentially get them into that paid tier.”

“Slack is a really great example of this. 95% of the functionality you need from a messaging platform for your enterprise is free, but when you hit a certain level where you need compliance, message history – all of these enterprise grade features – that’s when you buy it. You’re happy to buy it, because you need those features and you’ve got so much value from the product already.”

Let’s look at the hard numbers: Over the past few years, Slack has exceeded 12 million daily active users. That’s an increase of 37% year over year. Of those, 6 million are paid seats: proof that users have been keen to supercharge the freemium version of the service (especially startups – more than 60% of which are paying customers as Vox reported earlier this year). 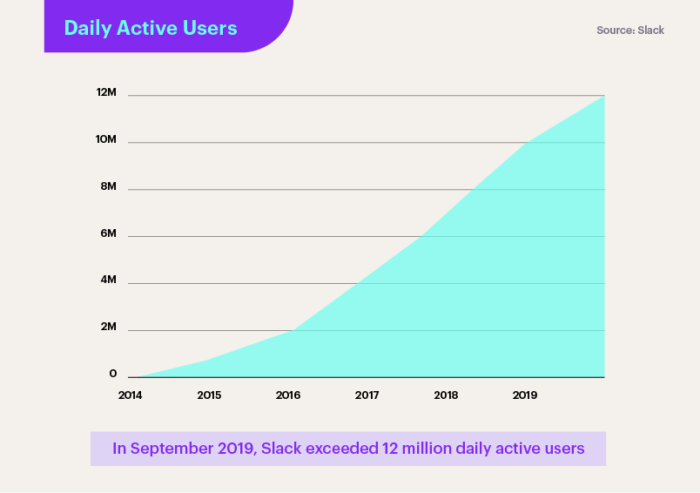 Vidyard have taken a similar approach by offering a significant amount of functionality in their free plan. With more than 3 million videos created on the platform to date, they’re well on their way to delivering real value to both their freemium and pro users.

Product qualified leads are key for moving the conversion needle

For decades, the business world has been laser-focused on capturing and nurturing marketing and sales-qualified leads. It’s time to change up the approach: while the right messaging and tactics can help you close the deal, it’s important that people have the opportunity to try your product out and get value from it. If it’s of real value to them, the positive experience they have will drive conversions  and, crucially, retention. 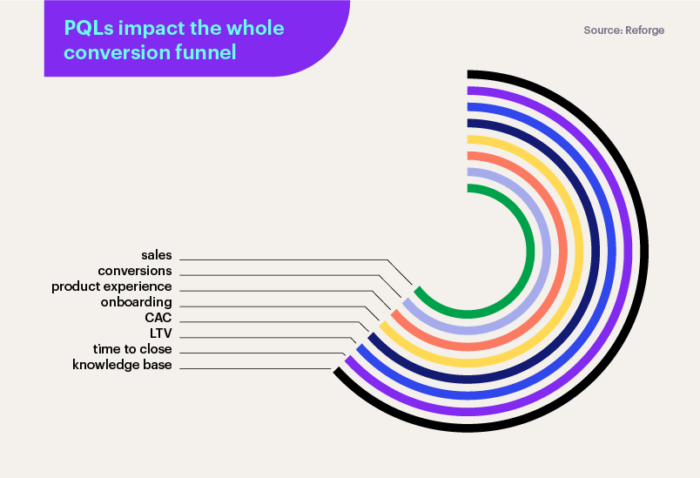 Consider this analysis from Georgios Chasiotis at Marketing & Growth Hacking: “The reason why we need to move beyond MQLs and SQLs is that people are tired of ‘marketing tricks’ that work only in the short-term. If the product is not good enough, all the effort and resources you spent in the previous stages (which are usually the stages we spent most of our resources) would go for nothing.”

Or take our Director of EMEA Sales Stan Massueras’ in-depth breakdown of an effective PQL strategy: once you’ve identified the user behaviors that demonstrate a legitimate intent to buy, you can reach out at a key moment – whether it’s when users register a certain level of usage, when they’re heavily using one particular feature or when they pass a milestone – and encourage conversion. 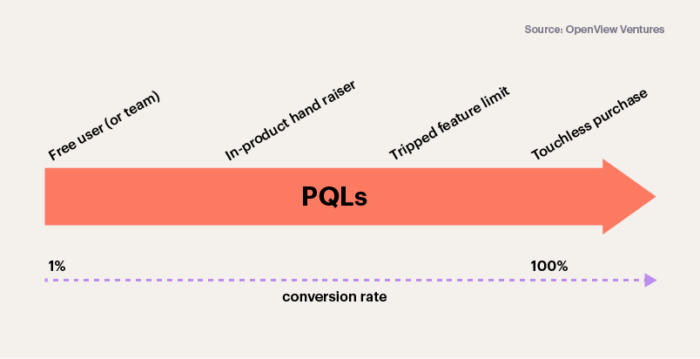 “We have a term we call hot PQLs. A hot PQL is a product qualified lead –where somebody in an organization is really getting value from a product and other people in the organization are signing up for the product as well.”

“The same thing goes for a sales qualified lead, which used to be a business development rep cold calling into a business saying, ‘Hey, this is what we do. Are you interested?’ Obviously that doesn’t convert very well, and I think has diminishing returns over time, because of the volume of companies that are doing that. So sales loves it because again, now they’re having these conversations with people that really love the product.”

Vidyard have deployed a savvy growth strategy by making their APIs available to other select companies at no cost. Designed to easily play and transcribe videos and analyze viewers, the APIs represent a powerful platform upon which partners can build.

One example is the company’s collaboration with HubSpot: by offering their APIs for free (but retaining control over user data), Vidyard onboarded thousands of new prospective customers and immediately discovered a profitable new lever. 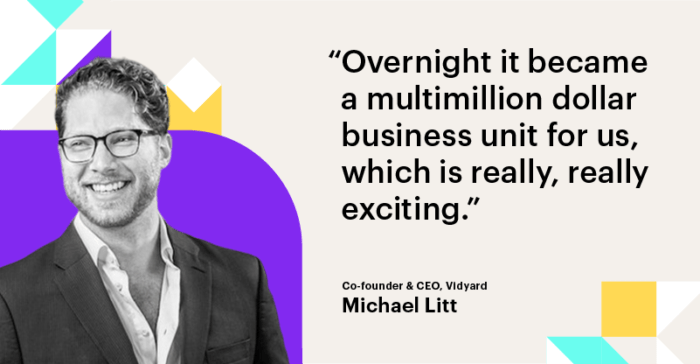 As outlined in this primer by Nordic, API offerings can often be a tricky model to get right. Do you charge every customer, no matter the amount of traffic? Do you opt for one flat fee or try to come up with a system that scales? (One option Nordic recommends is a freemium version with graduated paid tiers depending on client size.)

While APIs are increasingly accepted as a product that can be monetized, there are other ways to squeeze value out of them, as Michael and his team discovered through their work with HubSpot.

“The problem was that HubSpot didn’t have a video product. They had a growing partnership landscape. We’ve always invested in partner relationships. Our first one was Eloqua, then Marketo. We feed video viewing data into those systems to better enhance nurtured activities that these companies are running. We went to HubSpot and said, ‘Here are our APIs. You can build this functionality in your product, we’ll allow you to do it for free’ and then we’re going to own 100% of the customer relationship if there’s an opportunity for them to do more with our product outside of the HubSpot ecosystem.”

“So they built that. And in a year we got to 20,000 organizations that had uploaded content and about 300,000 videos. Now we’re able to mine that base of users who are raising their hand and saying, ‘I want to do more with this’ and own that relationship. Overnight, it became a multimillion dollar business unit for us, which is really, really exciting.”