A little over a year ago, I got the opportunity to start a new team within our sales organization – a team of Relationship Managers dedicated to growing our current customers at scale.

The opportunity emerged out of a shift in how we practice sales. We had split into two distinct but complementary functions. We now had “hunters” who acquire new business and “farmers” who nurture existing business. As part of this shift, we identified thousands of customers whom we believed would benefit from scaled account management, a new sales motion for Intercom.

“I was tasked with two things: getting the team off the ground and helping to get it right”

As the manager for this new team, I was tasked with two things: getting the team off the ground and helping to get it right. To do the first, we had to hire, train, and write a playbook – the building blocks of any team. But to get it right, we had to learn to work from our hypotheses, lean into the data and get comfortable with pivoting quickly.

The journey from just an idea to a team that’s delivered over $10 million in revenue has been filled with challenges and wins. Here’s what I’ve learned so far, distilled into five key lessons.

A fresh look at sales fundamentals for high-growth businesses.

When starting a new sales team, the most important question you can ask is, “Is the juice worth the squeeze?” That is, is the end result worth the time and effort required to achieve it? If you’ve decided to hire employees, onboard and support them and change your customer coverage model, the answer needs to be a resounding “yes.”

“The most important question you can ask is, ‘Is the juice worth the squeeze?’”

In our case, a resounding “yes” required seeing a positive impact on customer expansion and one big enough to justify the fully-loaded cost for the additional headcount. For the business case to be truly compelling, we identified that we needed to see at least 2.5x ROI.

We set up an A/B experiment to compare the performance of customers who were assigned a relationship manager to those who weren’t. We tracked customer churn, contraction, expansion and overall health, and correlated the metrics to our relationship managers’ activities. It was critical for us to develop a deep understanding of what was and wasn’t working. 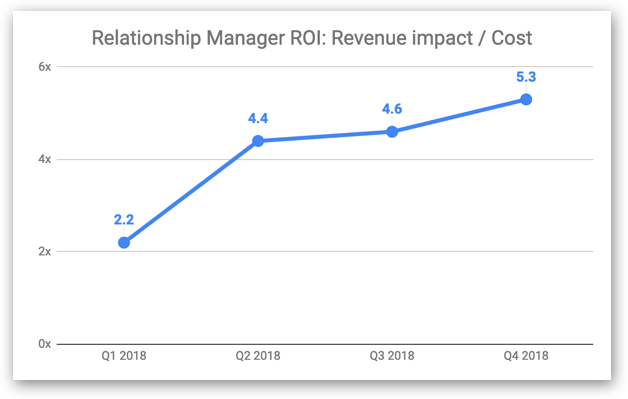 The A/B test confirmed our initial hypothesis, and we saw more than 5x ROI. We were also able to identify the specific tactics used by high performers. For example, relationship managers who made more phone and video calls saw 4.8% greater revenue expansion than their counterparts who made fewer calls. Armed with this insight and strong efforts from the team, we were able to meaningfully increase the ROI of the team over time.

In short, we not only learned that the juice was definitely worth the squeeze but also set ourselves up for long-term success.

In improv you often hear comedians make “yes, and” statements. It helps them take a concept and build on it in creative and often unexpected ways. Starting a new sales team is not unlike doing improv. You’re taking a hypothesis, a nugget of an idea, and constantly evolving it.

Early on, we hypothesized relationship managers would primarily use email to drive customer retention and expansion. After four months, our team had created over 20 email campaigns, yet we had little direct impact to show for our efforts. When the campaigns did result in expansion or churn mitigation, over 90% of time there was at least one customer call involved. It became clear that the campaigns themselves weren’t driving retention and expansion. Rather they were inviting follow-up conversations that were.

“You have to be willing to change your hypothesis as new information emerges and lean into ‘yes, and’ statements”

Situations like these call for strong opinions weakly held. You have to be willing to change your hypothesis as new information emerges and lean into “yes, and” statements. After we realized it was critical for relationship managers to make customer calls, we adapted the hiring profile for the role and updated our training. We started looking for sales people with extensive phone experience and helped our current relationship managers become skilled at making sales calls.

When you’re starting a new team, your initial hypothesis will almost always be proven wrong and to move the team forward, you need to seek out and iterate on new insights.

Some ambiguity in the role is unavoidable when joining a newly formed team and as a manager, you want to bring on people who thrive in this setting. In the case of my team, I wanted to hire relationship managers who’d think and operate like business owners, because no job would be too small for them and they’d be comfortable writing the sales playbook where none existed.

Let me share a personal example of what I mean by ownership: My mom is the president of a government consulting firm and is someone who is willing to do every job for her firm. It’s not uncommon to find her doing line edits on memos with junior associates or handling facilities issues for her office. She knows that as a business owner, if you don’t do something, you can’t expect it to get done. 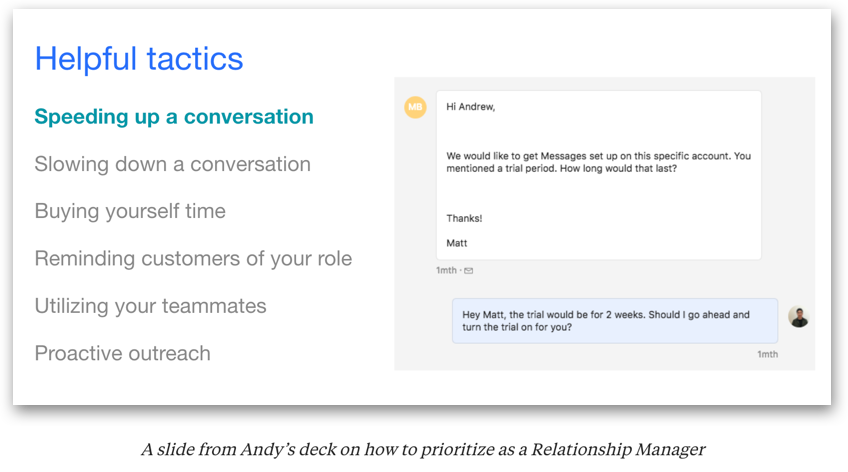 Having a team of owners has been a game changer for me and a critical part of the team’s performance and happiness. During a period of shifting priorities, a member of my team Andy pitched a way to prioritize our team’s daily activities by business impact and led a thoughtful discussion during a team meeting. This helped the rest of the team reorient their approach, and it had greater impact coming from a peer than it would have coming from me or another leader.

Hiring for ownership is a two-way street. For employees to become owners, they have to feel empowered and encouraged to play that role by their manager. Striking the balance between being prescriptive and giving autonomy can be difficult with a new team. The best advice I give for when you feel this tension is to stop and ask, “Are my actions helping or preventing my team from truly owning the role?”

As a kid, I was fascinated by the television hero MacGyver. How could someone build a lie detector, hot wire a helicopter and hack into a supercomputer using stuff I could find in my family’s garage? This kind of resourcefulness is what you’ll need when starting a new sales team, although admittedly in far less dire situations.

New sales teams operate without the same systems or level of cross-functional support that established teams enjoy. The reason is simple – your team and its needs are new to you, your employees and the rest of the company.

I’ve been challenged to do things that are outside my job description and require skills I hadn’t needed before. One time I did a last-minute, crash course in SQL so I could pull users for an email campaign on a tight deadline. Another time I did an impact analysis on two quarters of customer churn to understand the reasons behind it (yes, I made pivot tables 🤓).

“You will often be asked to step outside your comfort zone and sometimes, you will fail”

Starting a new sales team means you’ll often be asked to step outside your comfort zone and sometimes, you will fail. The upside is that if you channel your inner MacGyver, you’ll enjoy the opportunity to grow and have a lot of fun along the way.

5. Find your village and cultivate it

The saying “It takes a village” comes to mind when starting a new team. If your sales team ends up being successful, chances are a number of people helped you get there.

“If you end up being successful, chances are a number of people helped you get there”

As you start building your team, spend some time thinking about the people in your organization who will be critical in your journey. Oftentimes these will be your partners in marketing, sales operations, recruiting and senior leadership. It’s important for you to seek them out and invest in fostering those relationships because at some point, you will need their help.

I’ve been lucky to have colleagues who are willing go above and beyond to help me out. When a technical issue prevented me from sending a time-sensitive customer message, our Head of Sales Operations Jeff worked with me into the night to find a workaround. It would have been easy to overlook but thanks to his help, we worked side-by-side to ensure that our customers had a good experience and we didn’t miss out on a revenue opportunity. 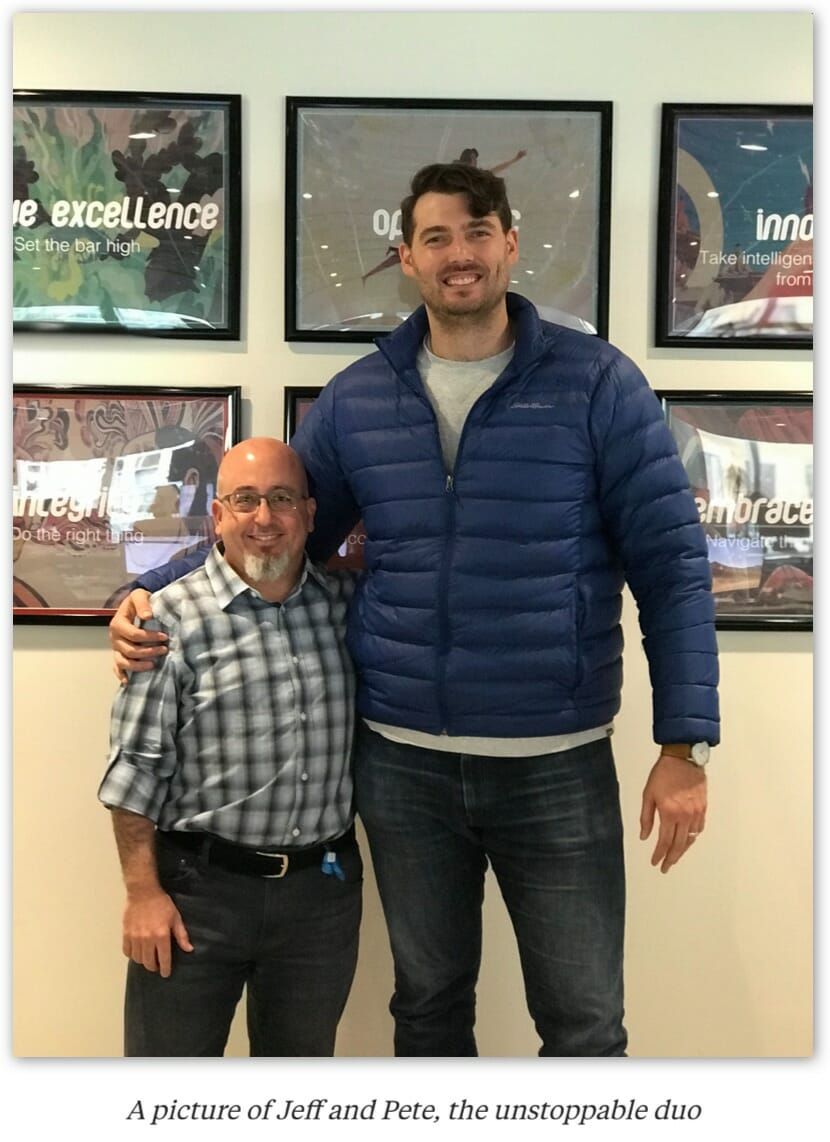 A year of change and growth

Year one often felt like we were building the plane mid-flight. We tested new things, stretched in our roles, failed and succeeded. The team grew from an idea to a high-performing group of ten globally and as individuals, we grew as well. I watched my team develop new muscles and uplevel professionally and recently, two of my highest performing relationship managers were promoted to more senior roles. Seeing them take the next step in their careers has easily been my favorite win from the past year.

Looking ahead to year two, our mission is to improve how we execute against our retention and expansion targets. The key to our success will be enabling our team with functional training and systems improvements to help them do their job. While we’ve laid a solid foundation, I know this next chapter will bring different challenges and even more opportunities to drive real impact.

The chance to build new sales team has been extremely rewarding, both professionally and personally. To anyone starting a new team, good luck and remember to enjoy the journey.

Have you recently started a new sales team? I’d love to hear what’s worked for you! Leave me a comment below or drop me a line at pete@intercom.com.