We hear how Shopify Plus are turning enterprise commerce on its head.

As tech continues its path toward democratization, with better offerings available to more people, an odd contradiction has revealed itself: on the enterprise side of things, most software simply isn’t very good.

By Loren Padelford’s estimate, tech is one of (if not the only) industries in the world where the more money you spend, the worse your experience becomes. Loren, the General Manager of Shopify Plus, was hired to topple conventional notions of what enterprise software could (and should) look like. Under his leadership, Shopify Plus have grown to support 7,000 brands – including Kylie Cosmetics, Fashion Nova, Steve Madden, Staples and more – who process 11,000 checkouts per minute.

In the first decade after its founding in 2004, Shopify amassed 120,000 customers and catapulted into the top 10 on Deloitte Technology Fast 500 list. In 2014, the company smashed expectations, earning $105 million in revenue – double what they had taken in the year before. It wasn’t long before they identified a further growth opportunity: some of their larger customers were jumping ship, saying they had outgrown the company’s SMB-oriented solutions. In a bid to move upmarket and give their biggest customers a runway to grow and scale globally – Shopify Plus was born.

While the move upmarket isn’t right for every brand, Shopify ultimately took the plunge because they realized they had an entirely new concept of what “enterprise” software could be. In this week’s Scale episode, Loren outlines the sub-brand’s path to hypergrowth. Tune into the full episode above or get Loren’s key takeaways below.

This is Scale, Intercom’s podcast series on driving business growth through customer relationships. If you enjoy the conversation and don’t want to miss future episodes, just hit subscribe on iTunes, stream on Spotify, or grab the RSS feed in your player of choice.

Creating a sub-brand to move upmarket

Establishing a brand within a brand can be risky business. Those that succeed do so because they’re an extension of the parent company’s core mission.

Things become even more difficult when the sub-brand’s goal is to help the company move upmarket. Renowned venture capitalist Tomasz Tunguz describes this decision as an unpredictable experiment involving a new sales motion – and says that companies who are considering the move should be sure they have the investment, pipeline, and culture to support two distinct, different segments.

In Shopify’s case, creating a sub-brand didn’t just fit the company’s overall mission to help businesses conduct commerce; it also opened the door to those larger clients that are white whales for most startups. Just don’t call Shopify Plus “enterprise software”, says Loren:

“I don’t care about the enterprise, right? I think it’s beautiful marketing created by a mafia of companies that has existed for five decades, that has convinced the world that you should spend a huge amount of money to get crappy software. I’m not trying to become an enterprise software company. I don’t look at our customers as enterprise customers. That’s a pricing model in a software market, not reality. Our position has always been that we’re going to give you the solution that does what you want, we’re going to make it cost-effective, we’re going to make it efficient so you don’t need huge amounts. Isn’t that just what a good software company should do?”

It’s a mindset that takes the old, outdated model of enterprise software and turns it squarely on its head. Instead of offering clunky software with bloated features (where users’ frustration seems to balloon the more they spend), Loren believes in an entirely different approach that delivers a cost-effective, joyful experience for customers – even if they happen to be large organizations.

How does a team become a dynasty? It’s about attracting the most talented people in the world, pushing them to the limits of their abilities, establishing the conditions for success, and creating a mythology around their efforts and achievements.

It’s no secret that talent is a magnet for more talent. But once you’ve hired brilliant people, you have to retain them. McKinsey reports that getting the right people in the door can boost productivity by 800% – and that these folks can “disproportionately create or protect value” in ways that aren’t always obvious to the casual observer.

Few recent startups talk about themselves in these terms, but Shopify aims to become a 100-year company. To get there, Loren and his team have employed a strategy they call the “four elements of hypergrowth”: 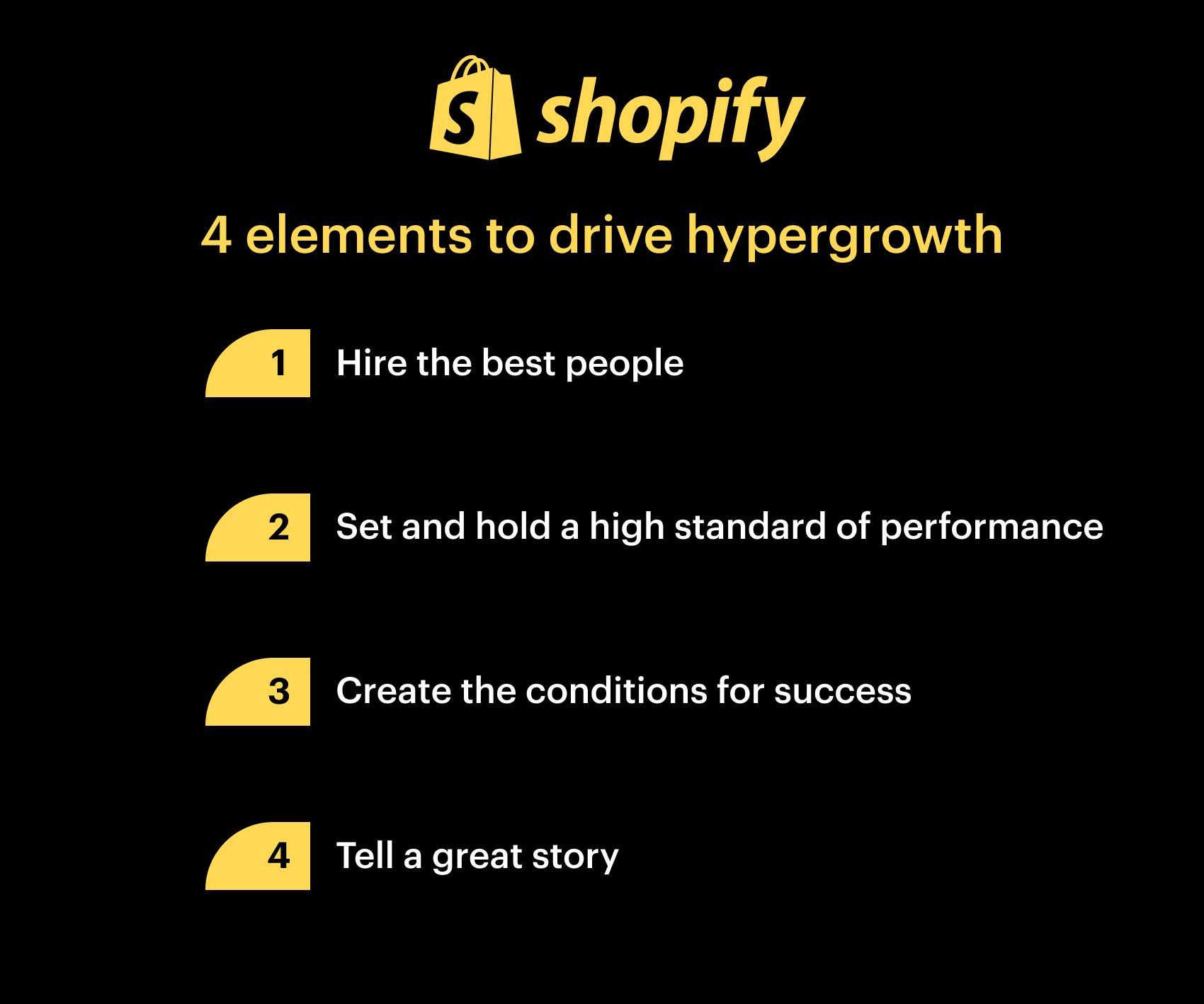 Loren goes onto explain why these four elements are essential for driving hypergrowth and highlights what each entails: 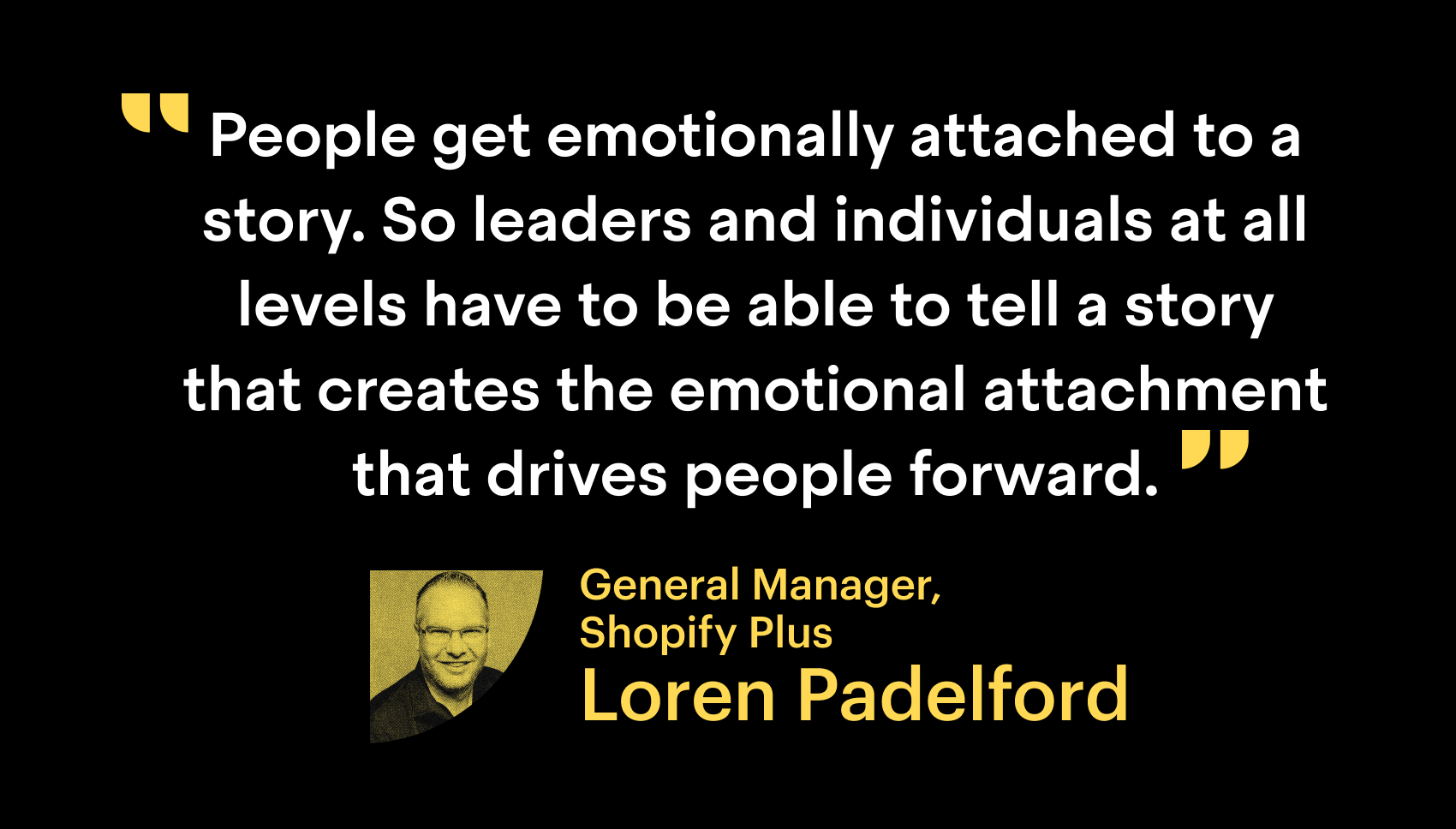 Stories, after all, are the main drivers of human behavior. Loren puts it this way:

“Human beings throughout history have never done anything because it was logically good for them. We just don’t, it’s not our DNA. We do things because we’re emotionally attached to them. We do it because we believe in something. People get emotionally attached to a story. So leaders at all levels and individuals have to be able to tell a story that creates the emotional attachment that drives people forward. Our brains are not set up to respond to logic. They’re set up to respond to emotion. And so storytelling is the best way to convey why we’re doing this. And it’s the why that gets people to do extraordinary things, not the what.”

The future of commerce

As part of its annual Hype Cycle for Digital Marketing and Advertising, Gartner explored the technologies that drove the most value for marketers in 2019. The strategies dominating the top of the curve all revolve around creating an unparalleled customer experience. Chief among them: artificial intelligence, customer data platforms, and conversational marketing like chatbots. When it comes to commerce, influencer and advocacy marketing still matters, but far more important is a high quality product with an experience that’s irresistible for those VIPs – even outside of an endorsement agreement. 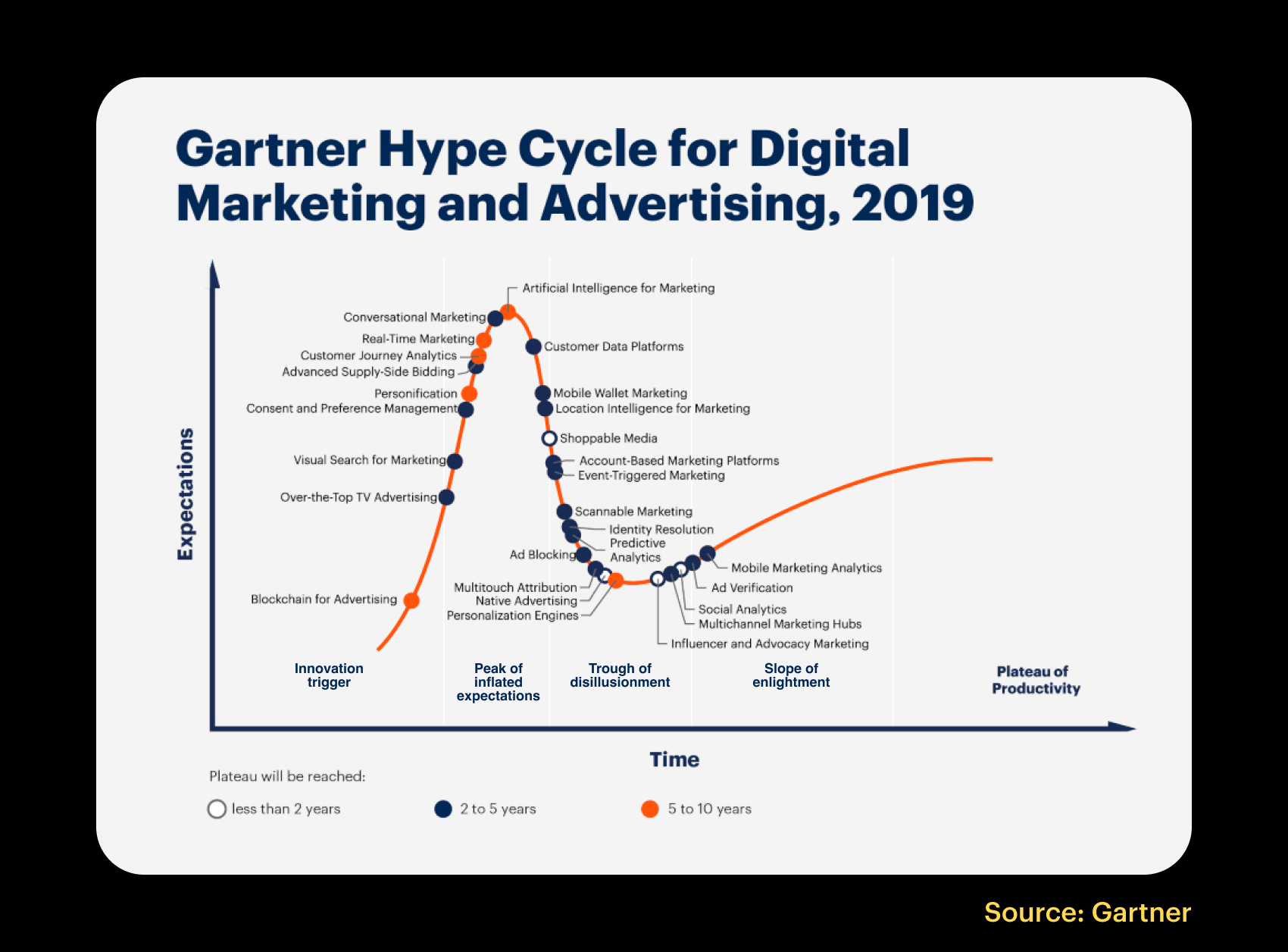 For proof, Loren looks to cult shoe brand, Allbirds. Ben Affleck, Cindy Crawford, Matthew McConaughey, Emma Watson – and even Barack Obama – have all been spotted wearing the cult-favorite wool runners. While movie stars aren’t strangers to wearing labels for hire, securing an endorsement from the former President of the United States isn’t as simple as a check and a contract. The product actually has to be so exceptional that it creates an aura of cool and a lifestyle that consumers long to be part of.

As commerce evolves, Loren hails creating deeply personal experiences that meet customers exactly where they are as more important than ever. At its core, success lies in taking an intimate, customer-centric approach that goes far beyond influencer marketing.

“As commerce continues, whether it’s online or offline, it is 100% about experience. The brands that are focused on understanding their customer at an intimate level – really deeply understanding the whole life of their customer and building experiences online, offline, in mobile, in augmented reality, wherever it is that meets that customer where they want to be – will do well. Once you have those customers, how do you build a community around them? How do you let them interact? How do you help be part of their daily lives?”