With customer acquisition costs rising, the freemium model can look tempting for a lot of SaaS companies.

Freemium’s a great way to acquire lots of customers relatively quickly and easily, but the job of converting them to using a paid product is where the rubber meets the road. And the challenge is a lot harder in an enterprise context, where the buyer and the user aren’t necessarily one and the same person.

Many businesses struggle to strike a balance between freemium’s light-touch customer engagement with the more involved enterprise sales process. For every company that’s executing the freemium model successfully, there are hundreds more that struggle and the tension it can create between sales, marketing, and product teams.

But if anyone knows how to walk this tightrope and make it to the other side, it’s Kristen Habacht. She was Trello’s very first sales hire in 2010, built the company’s sales and account management teams, and was instrumental in scaling its business from 5 million to 25 million users within two years.

Kristen joined Atlassian when it acquired Trello in 2017, where she is now Global Head of EDR Sales. Like Trello before, Atlassian has a non-traditional sales model. Yet that hasn’t stopped them making big inroads into the enterprise market.

For the latest episode in our Scale series, Intercom’s Dee Reddy caught up with Kristen to find out how freemium can drive enterprise sales, how it changes the interaction with the customer, and why it fundamentally affects the relationship between sales, marketing, and product teams.

Listen to the full episode above or check out Kristen’s key takeaways below.

Let the product be your sales guide

Right off the bat, Kristen acknowledges that the freemium model isn’t a universal cheat code for winning sales. Making it work means taking a product-led approach, so it might not suit every business. “You have to really think about what you’re selling, where your product reaches, how you can support that before you go forth and do that,” she says, before adding:

“The idea of saying, let’s give people something that is useful for them, let’s let them use that at least at a base level to really understand if it’s going to fit their work and their life, and then let that product guide that sales process, I’m a huge believer in that.”

Product-led is a mindset that shifts a lot of the power in the sales relationship to the customer. Today, customers have a lot more choice when it comes to discovering product options independently, and they’ll only interact with a vendor’s sales team when they’re ready. As Kristen says:

She predicts that this strategy of letting the product guide the sales process is the future of tech:

“I think that’s where a lot of the future of sales and tech in general is going to go to some extent, which is to really let the product guide the people. They want to talk to sales, if it’s helpful, they want to talk to a partner in that conversation and feel they have the agency on their own to make those decisions. And a salesperson should be the person helping them make sure that they understand the right deployment and those kinds of things, but they don’t want to be hard sold; nobody wants to be hard sold.”

The beauty of the freemium model in an enterprise setting is that the supplier due diligence process is already much further along. That’s because the customer has already identified the business need, vetted a bunch of products, and then run the proof of concept trial. As Kristen puts it:

When a customer is close to reaching a decision about upgrading from the free version to a paid license, they’ve seen the product up close, they’ve played with it, and they can see its value to their business – so they’re already convinced and on board. Kristen says:

“This really does tend to be something where people have had a pain and they have found a solution to that pain, which is what your software or tool does, and that you are just helping them understand the right way to implement it in their organization. I think people want to buy like that.”

For comparison, she reaches for an example outside the software world: car manufacturer, Tesla. Tesla’s direct sales business model has driven it to being the world’s leading producer of electric vehicles, with more than 367,000 units delivered in 2019 and revenues of $24.6 billion.

“People don’t want to go to a dealership, they want to be able to make those decisions on their own and then have somebody help them execute what they’ve decided,” she says.

Enterprise sales conjures images of fleets of sales teams, feet on the street, hustling hard to reach customers, and endless rounds of pitches to win over multiple stakeholders. It’s a model that seems completely at odds with freemium where there are far fewer touchpoints between the company and its customers.

Naturally, many elements of traditional enterprise sales still remain: the larger the customer’s organization, the more there will be people on the legal side who will want to review a contract, on the IT side who want security reviewed, or on the procurement side who want to haggle over the cost.

Atlassian handles this by offering the same price to all customers – “there’s a fairness to that, I think that customers really appreciate,” Kristen says. This echoes the philosophy behind Atlassian’s distribution flywheel where the product, marketing, and sales teams work together to remove as much friction in front of the customer’s path as possible in a transparent manner. 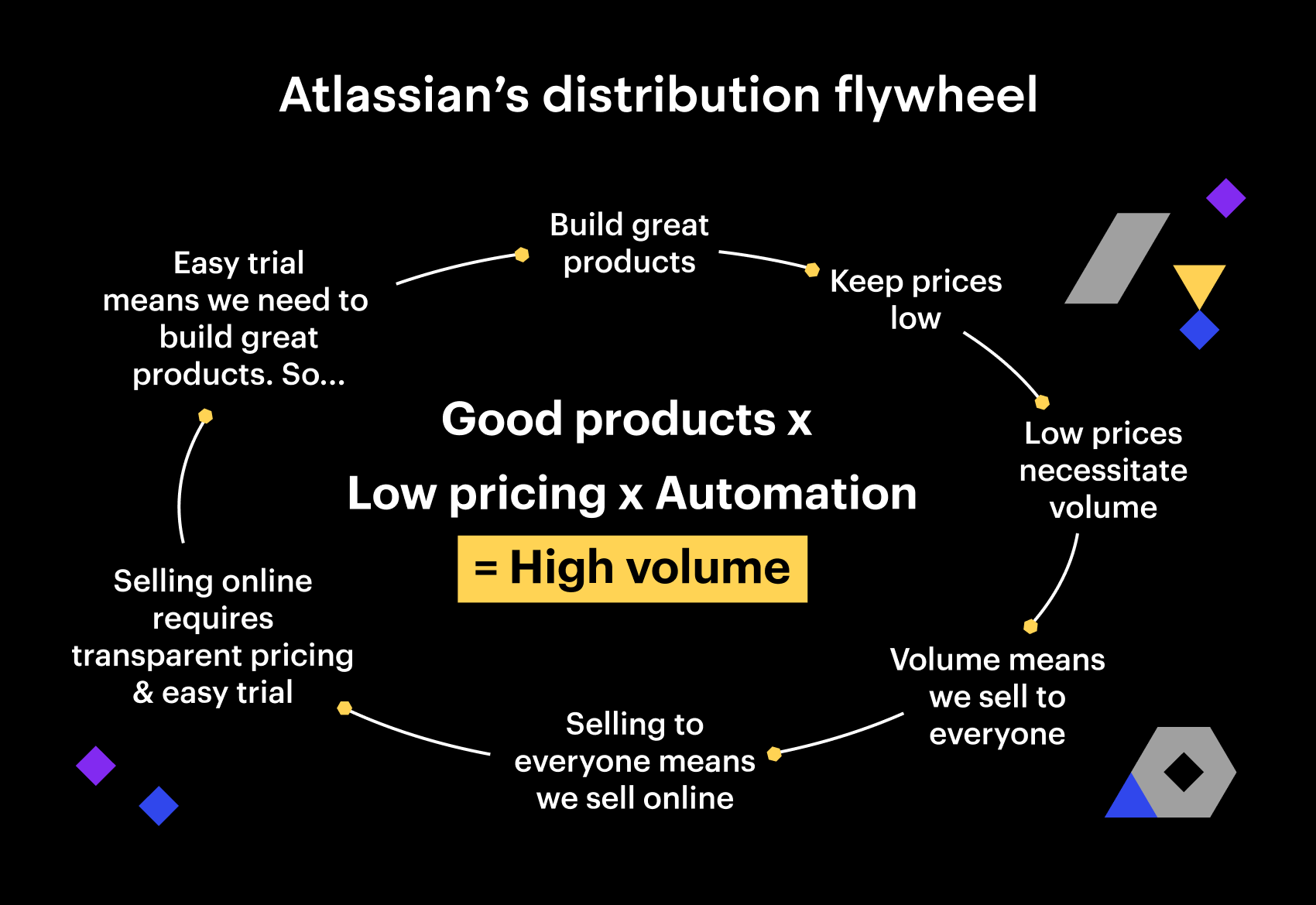 Meeting the needs of an enterprise buyer

It all comes back to giving the customer agency: they initiate the contact with sales when they need help through a particular part of the buying process. In the freemium-to-enterprise world, the job of sales is to be there when the customer calls on them, rather than rushing would-be buyers through the funnel. Instead of a pushy, always-be-closing approach, everything’s on the customer’s terms, Kristen emphasizes.

And from the seller’s side, there’s less investment needed in nurturing leads through a lengthy pipeline, so the customer acquisition cost is lower. ProfitWell estimates that freemium reduces CAC by 15%, as there’s no overspending on paid marketing channels or sales processes.

Having a freemium and product-led approach avoids the danger of building a marketing-led or sales-led organization. Kristen believes it’s an essential pillar that helps the relationships between each team deepen – which is crucial for helping the company scale.

And as each team grows, they can work closely together and contribute to the product roadmap through their own perspectives, without stepping on the other’s toes. Without a healthy feedback loop, there’s a big risk that adding a feature to meet the needs of one large enterprise customer will throw the entire roadmap off course. Kristen explains:

“Sales and marketing shouldn’t drive a product roadmap, and product shouldn’t drive a roadmap that isn’t influenced by sales and marketing; there has to be a healthy balance there. We always struggle with that because it gets really easy as a salesperson to say, ‘well, if you only added XYZ feature, I could bring you a million-dollar contract’. And that might not be at all with the marketing team’s vision for the product, or it might take so much that it would knock off all the other things that they were working on from an engineering resource standpoint.”

Kristen harks back to her time at Trello, where a guiding principle was that the sales team would never sell or represent a feature that the product didn’t already have:

“It was a really important agreement between us because it said to my engineering and my product team, ‘I have your back, l am never going to put you in an uncomfortable position. But in return, we’re going to have conversations about what people are asking for, and we’ll make agreements as a team’.”

Establishing clear rules and boundaries, especially at startups, helps to avoid the understandable fear that engineering teams can have when the first sales hires come on the scene. The connected model makes sales, marketing, and product equal partners at the table. 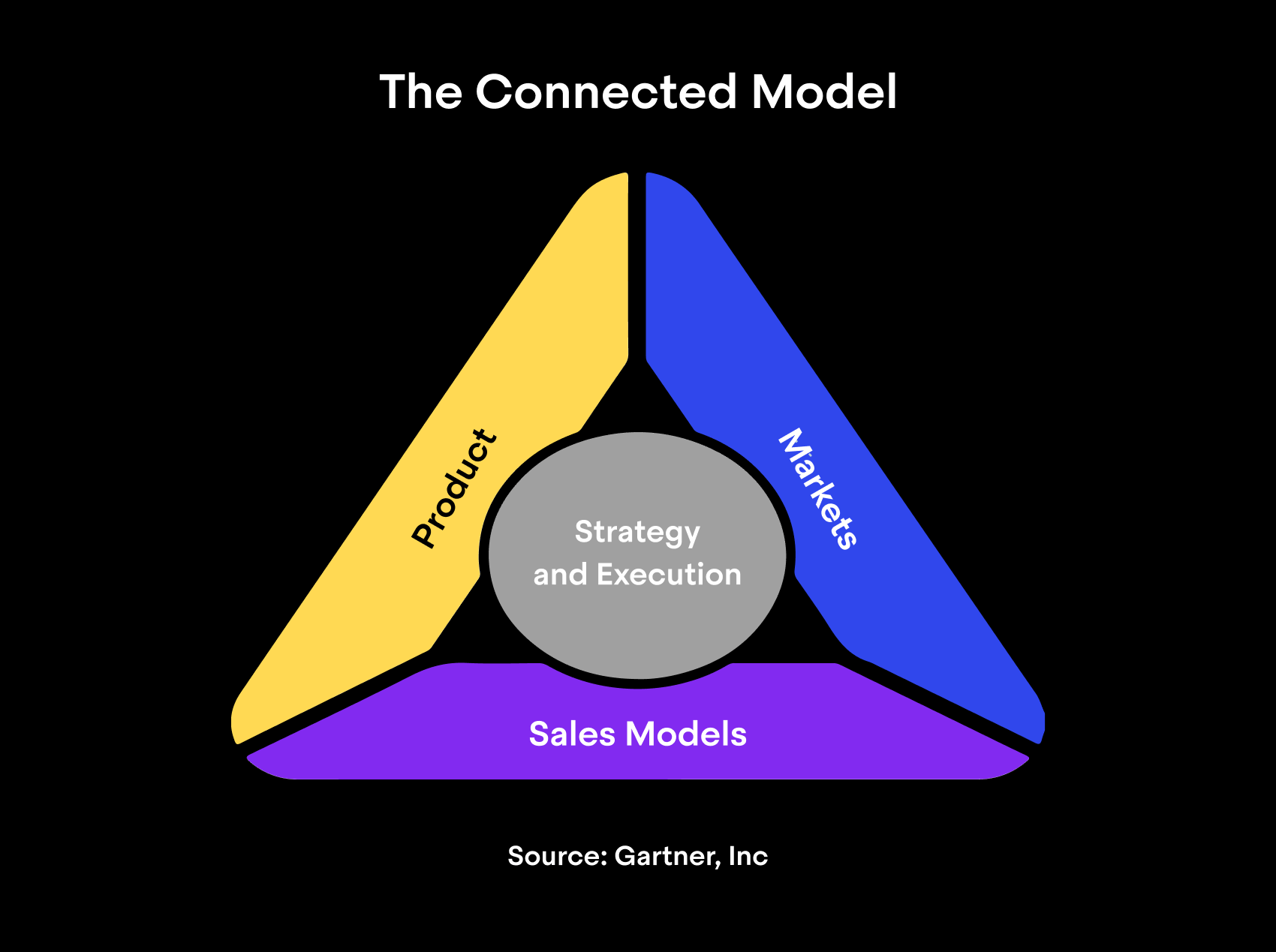 Best of all, it’s a model that connects customers to the products and buying experience they want.