Ask any founder and they’ll tell you – growing a fledgling startup into a thriving business is an exercise in survival.

For new tech companies, the outside world is filled with deadly traps. The situations that portend failure are varied and unfortunately common – no product-market fit, no cash, bad product, burnout, to name just a few of the most obvious.

In this world, growth trumps all other priorities. The faster you grow, the more likely you are to achieve long-term success (and actually survive long enough to scale). According to consulting firm McKinsey, only a small fraction of companies actually achieve the highest rates of growth and even fewer can sustain it. But, still, it’s not impossible.

Just look at subscription analytics startup ChartMogul whose brand and product are now a household name in the SaaS community. Barely over five years old, the company has analyzed more than 200 million subscriptions and more than a billion customer transactions.

Along the way, they’ve become something of a leading authority on subscription businesses. With their newsletter, podcast, guides and cheat sheets, ChartMogul have taken an open-book approach to scaling their business, sharing everything they’ve learned with the customers who are growing alongside them.

ChartMogul founder and CEO Nick Franklin sat down with Intercom’s Kate O’Hanlon to discuss the ups and downs of hypergrowth. He shares how he built a highly engaged audience, what he’s learned about partnerships, why he’s so focused on solving one core problem, and more.

Listen to the full episode above or check out Nick’s key takeaways below.

This is Season Two of Scale, Intercom’s podcast series on moving from startup to scale-up. If you enjoy the conversation and don’t want to miss the rest of the series, just hit subscribe on iTunes, stream on Spotify, Stitcher, or grab the RSS feed in your player of choice.

There’s a certain formula that tech companies follow when they’re getting started. First they build an insanely awesome product. Then they seed it in the market, running beta tests and iterating on features. Eventually they ramp up their go-to-market efforts.

But hidden behind this well-trodden formula is a grim reality. According to CB Insights, 70% of tech companies can expect to fail – usually within just 20 months of their first financing round. Among the leading causes of death? Poor marketing.

A better strategy is to prioritize building your audience alongside developing the product. That’s exactly what Nick did when he made an early investment in ChartMogul’s content. Looking around at the market, Nick saw an appetite for content about growing a SaaS business.

“Tomasz Tunguz and David Skok – they were publishing a lot of content around SaaS metrics and these kinds of things. It seemed like this was driving interest in the [business intelligence] space. So I thought, “We want to become an authority in this space, so we should also be doing that.”

“We didn’t think of it like traditional marketing. We were just trying to create something of value and then publish it. That [is what we believed would] help raise awareness of our company and brand.”

For many startups, investing in content – especially evergreen content – can be a wise long-term growth strategy. Venture capitalist Tomasz Tunguz makes the case for content as a marketing channel with compounding returns. He compares evergreen content to a bank account – you start with small incremental gains and with interest accumulating over time, it can yield enormous results. 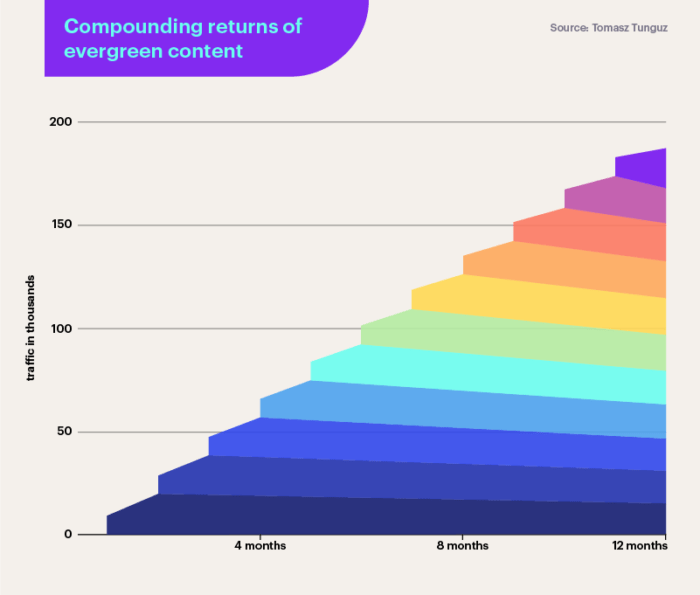 Invest in partnerships to grow your reach

In a crowded market, partnerships can be a competitive moat. Integrations with other products can add valuable functionality making your own product stickier. Co-marketing can expose you to new audiences that might otherwise be difficult or expensive to reach.

From the customer’s point of view, partnerships are a non-negotiable. The typical mid-sized company, with 251-500 employees, uses 123 different SaaS applications and that number only grows as companies get larger. There’s little room for products that’d prefer to play lone wolf.

Top companies have responded to shifting dynamics, moving from product to platform. Take HubSpot, for example: over the last five years, they’ve grown their app marketplace from 40 to 350 integrations. In a 2019 earnings release, HubSpot CEO Brian Halligan characterized the company’s evolution as one from “an all-in-one suite to an all-on-one platform.” 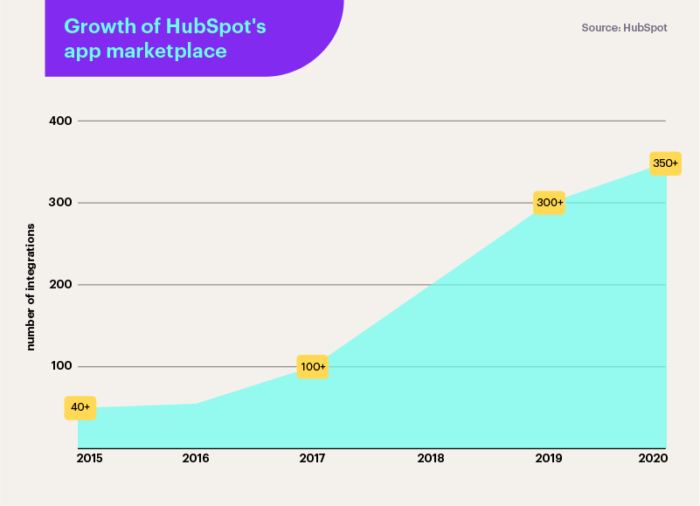 For ChartMogul, partnerships have had an outsized impact on their growth. In the company’s early days, the team prioritized building integrations and doing co-marketing with big payment processors and subscription billing platforms. Today they boast more than 20 integrations.

“We launched integration with Stripe first, so doing co-marketing with them, getting on their app store. Then [we did] co-marketing with Braintree, PayPal, Recurly, and Chargify. I even remember training the Recurly sales team about our products. Getting strong relationships with those companies early on really, really helped in the early days, and it still helps today being a featured partner.

“The reason I love the partner stuff is [because when] you build the integration, it improves the product and you get this free marketing playbook. They blog. They email. You put it in your newsletter, they put it in their newsletter.”

ChartMogul found its initial traction selling to early-stage companies and small businesses. Like many startups, they built for and marketed to companies that looked just like them. It’s a surefire way to guarantee your product will resonate (and a strategy we used early on at Intercom).

But here’s the problem with selling downmarket: startups have a high mortality rate. They get acquired (if they’re lucky), they downsize, or they go out of business. For the companies who count them as customers, churn is an unavoidable constant they need to tackle head on.

“Our ability to grow, more and more, comes from our ability to close larger deals. Large deals aren’t six figures but maybe $30,000, $40,000, $50,00 a year for annual contracts. It becomes harder to grow without being able to get these customers too. SMB is where we started but if we weren’t able to do the bigger deals now, we wouldn’t be able to continue our growth trajectory just servicing this SMB space.”

To continue servicing their smaller customers at scale, Nick’s placed a new premium on reducing churn and its knock-on effects.

“A couple years ago, we’d think, ‘Okay, how do we increase conversion? How do we get more leads in the top of the funnel?” A lot of that kind of thinking. Whereas now, we’ve shifted the focus. Really 100% is just on churn reduction and retention improvement. It’s all we care about it because that’s the only thing holding growth back.

“If you lose a customer, you don’t only lose that revenue, but you also lose the upsell, the natural upsell that you get from the customer as they grow. And you also lose word of mouth because if they cancel, they might not recommend you as much anymore.” 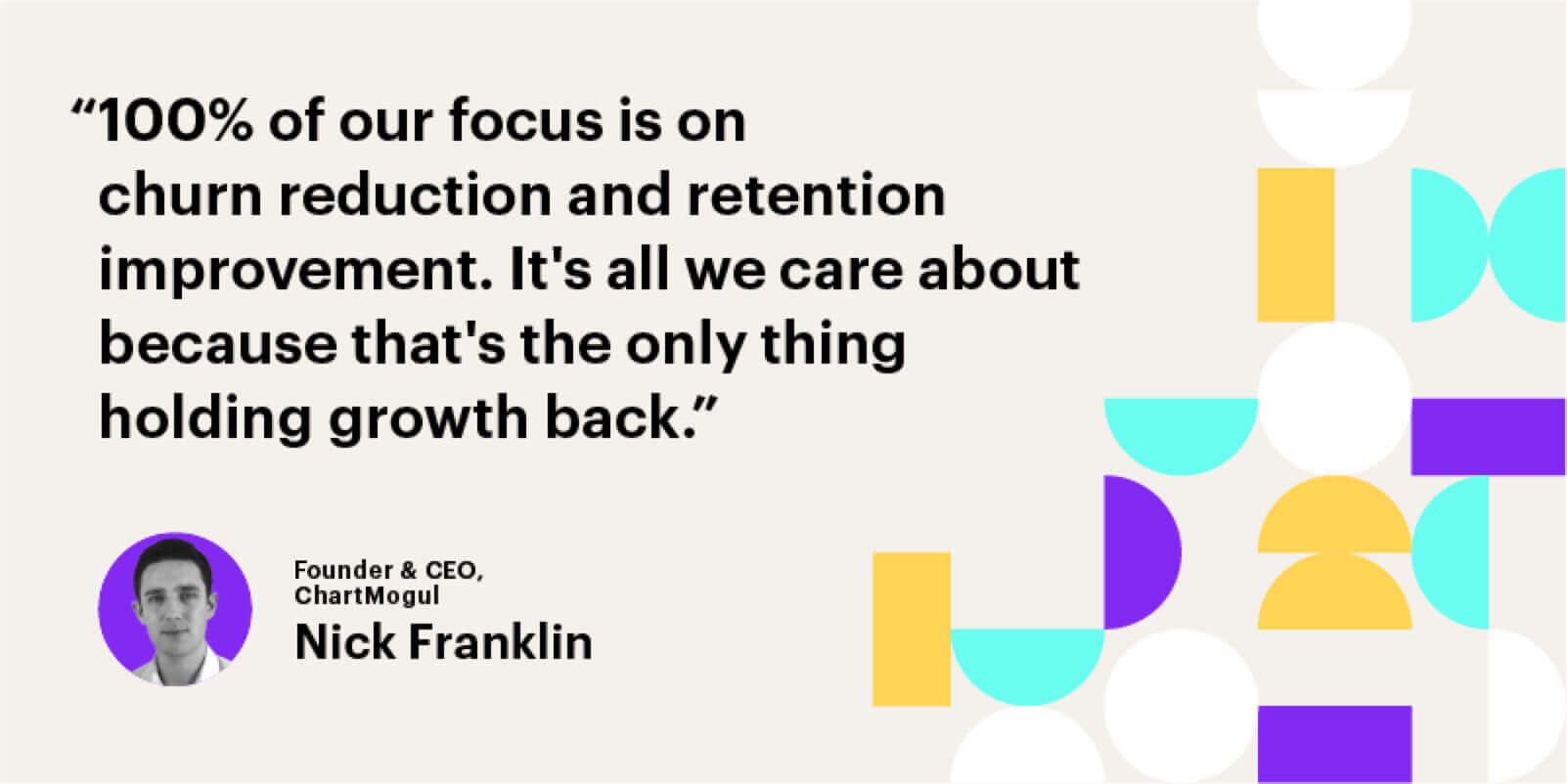 It’s harder than ever for tech companies to stay competitive. This is especially true when your product isn’t the only one of its kind. If poor marketing is one reason that startups fail, getting outcompeted is another.

A classic reaction to competition is to ignore it – or turn your product into a jack-of-all-trades. But as our co-founder Des Traynor wisely points out, the first is unreasonable and the second is unsustainable. Instead, he argues, companies would do well to turn their attention to creating the best possible version of their product. That’s how they’ll win.

“Some of our competitors have lots of different add-ons. We’re like, “Yeah, okay, we can make money there.” But I feel it’s not in our core competency of subscription reporting and analytics. And so we should just stay super, super focused there and try to resist any temptation to move outside there. That’s one way to stay competitive. Any time spent in something else is time away from your core. And I still think we haven’t really sold the core for the whole market yet.” 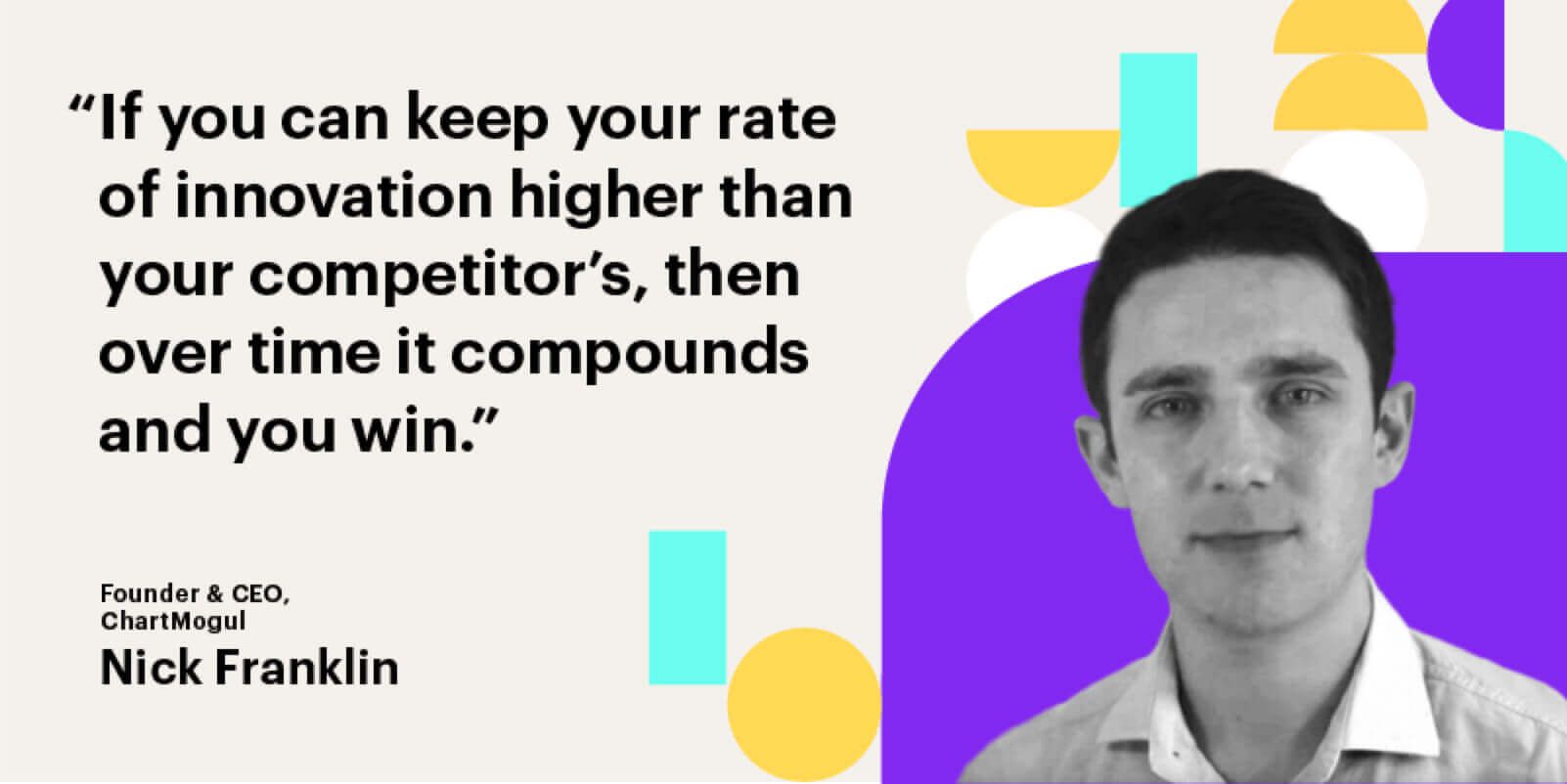 Nick has a second piece of advice for staying competitive in SaaS: keep innovating on your core product. The products that come out on top are the ones that continuously find new ways to deliver value to their customers.

“If you can keep your rate of improvement, your rate of R&D and rate of innovation higher than your competitor’s, then over time it compounds and you win. It’s all a balancing act.”